Monday 3rd September 2007
Every day starts around 5am, when the kids are scrubbed and washed (mostly outside with the garden hose). Sajana hates it and her screams usually wake me up at about 6am!
Then it’s time for exercise and prayers, and the grand washing of clothes – quite a performance!
The clothes are passed from bucket to bucket, vigorously scrubbed with soap and rinsed by the boys. Aamaa presides over the whole affair, sitting regally on a stool in her nightgown in the courtyard, filling buckets with the hose, giving instructions and generally directing the whole operation. There seems to be mountains of laundry every morning (not suprising with 34 kids!), and although Aamaa let me wash my own clothes, the boys all scoffed at my poor technique and insisted on scrubbing my clothes “properly”!
I tried to help with the kids’ clothes a few times, but after scrubbing a token shirt, Aamaa smiles kindly at me and says rather firmly “Maya finished now, ok?” 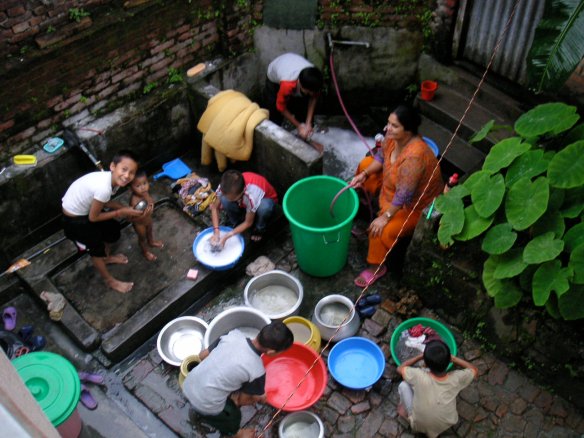 Aamaa oversees the washing – of both laundry and small children!

After the grand washing is done, the younger kids play while the older ones bustle about, sweeping the floors and courtyard, and start the cooking in the kitchen.
They are incredibly capable, and the two oldest boys, Jake and Jeetu, take charge of the daily cooking of rice and dhaal happily, expertly chopping and preparing tarkari and achaar too (vegetables and pickle).
They generally eat around 9am, although on Saturdays and festivals it’s much later (around 1pm) as there’s more to prepare.
As they’re not going to school, (lack of funding) their days are a bit vague and boring. They have lots of toys, which sit neatly in rows on the shelves of Aamaa’s ‘office’ (entrance hall) as the kid’s break them apparently!
They love drawing pictures, especially copying from photos etc, so I’ve given them some of my family pics to comission portraits! My room already has about 20 pictures I’ve been given by the kids, and I’ve been adorned with necklaces and bracelets from Aamaa’s friends and family members. 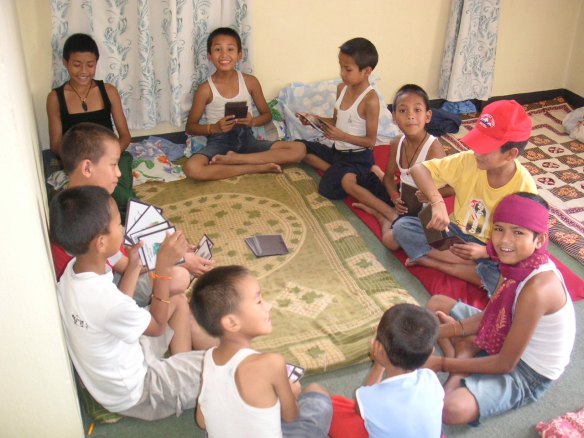 My first few days here were a bit dull, as they treated me like a guest and wouldn’t let me actually help at all! I clearly wasn’t wanted for laundry duty, and Sita looked terribly offended when I tried to help wash up – that’s HER job!
However, I eventually was allowed (after much begging) to chop some veggies in the kitchen. The boys were rather shocked that I could actually chop cabbage and onions without instructions, but I did get told off yesterday by Jeetu for not slicing the cucumber thin enough!
However, since then I sat down with Priya to plan some lessons, as the kids currently have no structure or education, which upsets Aamaa (she’s already explained to me very firmly that the MOST important things are DISCIPLINE and EDUCATION!).
Aamaa can shout when she wants to (and how!) but she doesn’t very often. She rules the roost with a firm but fair hand and very little fuss. The kids are good as gold most of the time anyway – so quiet and sweet!
I had my first hot shower the other day (since arriving in Nepal!) and it was HEAVENLY!!
I don’t really mind cold showers, but once the Himalayan winter sets in, I may just stay smelly for a while!
One thing I wasn’t expecting was the need for medical supplies. When I arrived here over half the kids had raging conjunctivitis, which I promptly caught (but I’m better now), and most of them have scabies (a kind of lice that lives on your skin).
I was informed by the volunteer who’s just left that although you usually get it on your hands and feet, you can also catch it from the toilet seat, and at some point I’m likely to get it on my nether regions!
Lovely!
(She also told a charming story about how she and another volunteer had to ‘check’ each other’s arses to see if they had lice!)
So, scabies cream and eye ointment are on my shopping list!
I’ve also used up my only gauze pad from my little first aid kit already. I walked into a room to find little Binod (6) who had a nasty infected bite on his leg, writhing around in agony, while Dinesh (10) twisted his leg, Chinese-burn style, to squeeze out the pus which he then wiped on a dirty t-shirt.
I begged him to let me clean it properly, and then had to call on my rudimentary first aid skills!
I boiled some water and washed it using the edge of my towel, then put some antiseptic cream and gauze on it. I didn’t have any tape, so I imporvised a bandage with my hairband! I was rather pleased with myself and luckily it worked and it’s better now (phew!).
Right, end of part two, but there’s still more to come!
love Medical-Maya
xxx