Well, I’m back in Kuwait again, but had a fantastic holiday!! The last two days on Phi Phi were great (although that bad prawn returned to haunt me after all – not so much a bad prawn as downright evil, frankly!!).
I was a bit ill for a couple of days, and shan’t be eating seafood for a while (if ever), but it was still lovely!!

Betty and Bryn really enjoyed their romantic night alone, and the last two days were really great.
Then we went up to Bangkok for a night and a day, which was nowhere near long enough, but we only had a week off school, so what can you do?
We went to an amazing bar called Vertigo, which was on the roof of a hotel on the 60th floor. It was completely open air with no roof at all and had AMAZING views of the city, as well as Appletinis (my new favourite drink by the way!!). We managed to get to the Grand Palace before heading to the airport, which was pretty special too.

It was a very long and tiring journey back, and I arrived at my flat at 3.30am to discover the power was out and my living room was flooded. It turns out Kuwait has had freak storms all week, torrential rain, hail and sandstorms, most of which ended up in a muddy puddle under my sofa! Apparently there’s a gap at the bottom of the door to the balcony from the living room, and while it usually lets in a bit of dust now and then, this time the balcony filled up with water and it just poured into my front room!!
The water heater shorted out rather spectacularly after that with a flash and a bang, and the water on the kitchen floor apparently wasn’t from another flood, but my defrosted freezer, becasue the power had been out!!

So, I’m very tired, and sooooo don’t want to go to work tomorrow, but I’ve mopped, shopped and re-frosted my freezer, and am about to hit the hay. I don’t think I’ve ever come back down to earth from a holiday with such a decisive bump – reality really hit me in the face!!

(I can hear thunder outside again, better start blocking up the door!) 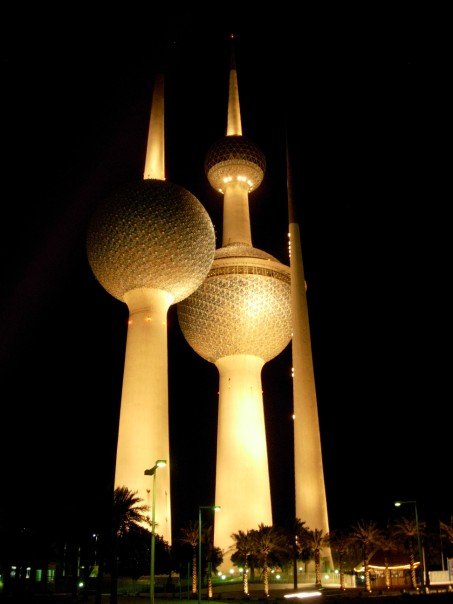 The Kuwaiti towers at night