Sunday 26th August 2007
On Tuesday (21st) we woke up early to go on an elephant ride through the jungle. It was a bit bumpy going, but within 15 minutes we came across a wild rhino with her baby. They allowed us to get surprisingly close (on the elephants) so I got some great pictures before they munched their way into the undergrowth. 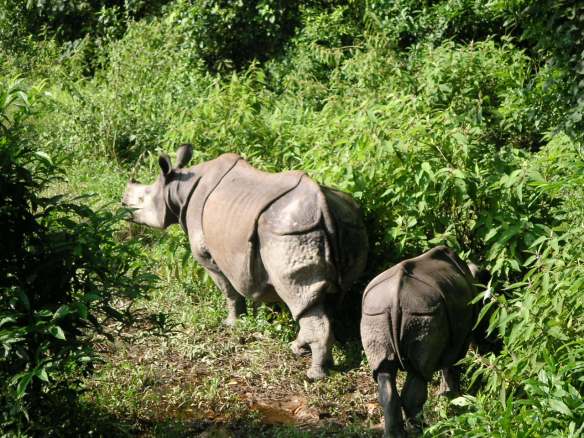 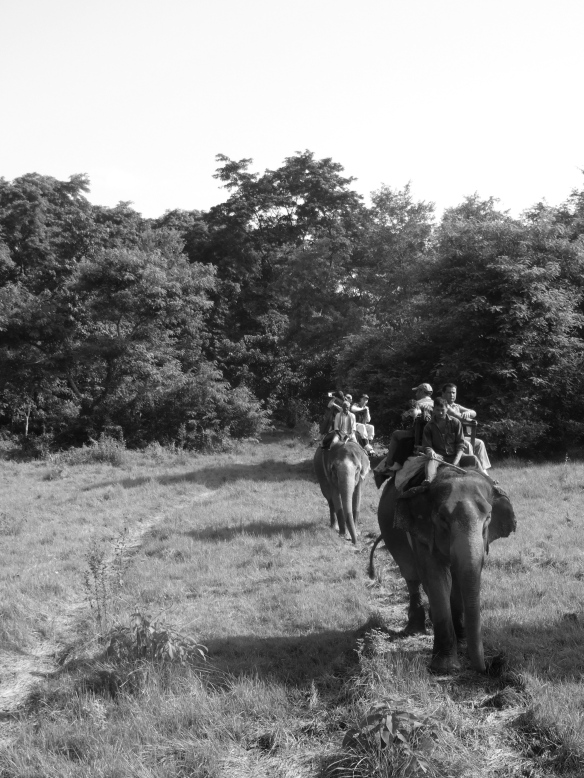 It is very hot and humid here, much like Sri Lanka was, which suprises me given how much futher north we are. It’s around 38 degrees, and very sticky, and we’ve dropped down to about 300m above sea level. The Terai plains are so different from the hills around Kathmandu, there’s a lot of forest-like jungle and wide open plains – almost a savannah that gives the landscape an oddly African feel.
After our ride, Jim and Eleonore opted to pay extra to bathe with the elephants in the river. Tourists in their swimming costumes climb onto the elephant’s bare back and the elephant stands up in the river and sprays you with it’s trunk and tries to shake you off. 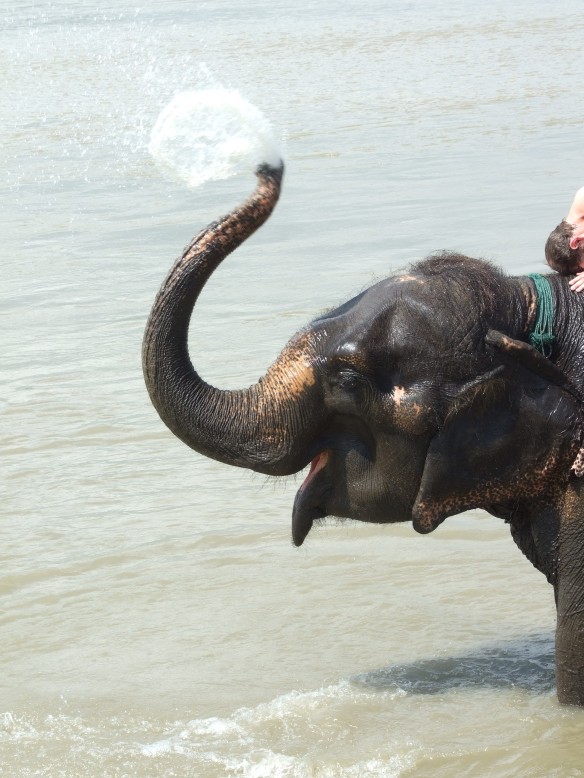 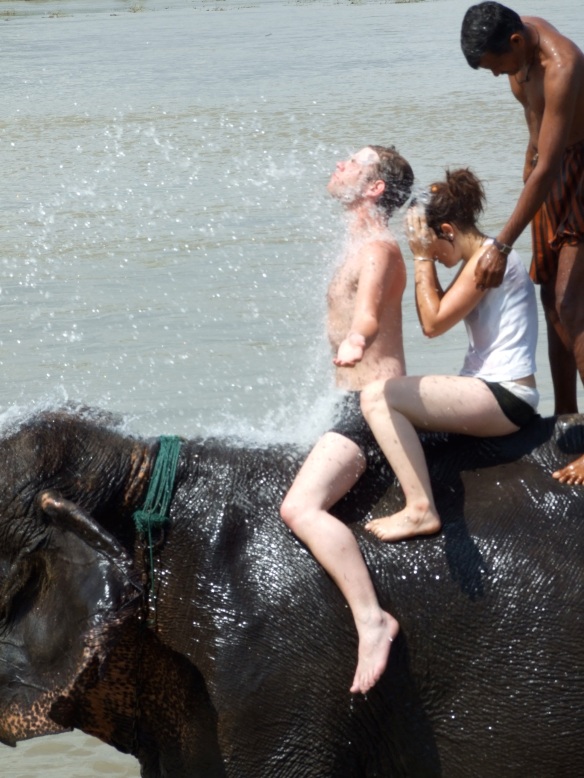 Although it looked like great fun to cool off in the river with the elephants, there was a slightly circus-feel to it that I didn’t like. Most of these elephants had been humping tourists through the jungle all morning in the heat, and instead of having a well-earned rest and cooling off in the water, they were being asked to perform yet again. Each elephant had a driver with a stick, and they kept beating them to make them stand up, spray, shake etc.
So I chose not to do it, although it did look rather refreshing from where we stood sweltering in the sun!
After lunch and a nap we took a canoe downriver (it was a canoe made from a single tree trunk, very tribal!) to the elephant breeding centre.
The boat sat so low in the water that there was only 4 inches from the lip of the canoe to the surface, with us sitting lower down inside. This was fine (although a bit wobbly), until the driver (well, bloke pushing us with a stick) started pointing out all the crocodiles swimming along beside us! Was more than a little nervous, but luckily the 3 or 4 crocodiles we saw were quite small (and are apparently called Marsh-Muggers, because of the way they drag their victims into the water!). We didn’t see any of the very rare freshwater dolphins (gangenetic? something like that) – but apparently there’s only 20 left in the whole of Chitwan, so not surprising really! 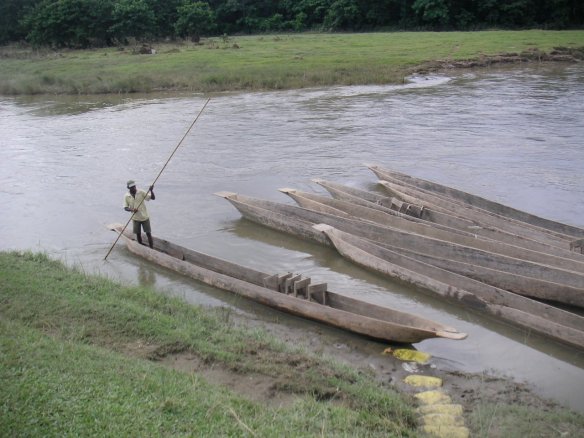 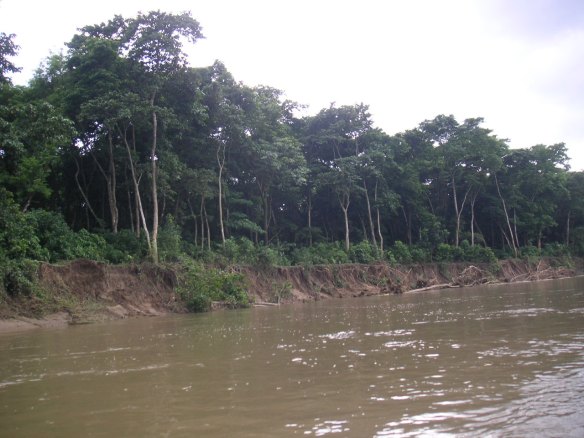 We arrived at the breeding centre, where we fed and played with the baby elephants – unlike the adults the babies weren’t chained up, so they could wander about freely, and came out to investigate our biscuits with great interest!
Unfortunately the elephants that are bred here are not released back into the wild, but are trained for work instead (mostly carrying tourists around!), so you could see a lot of ‘training’/beating going on with the poor babies, which was a bit sad.
There are some wild elephants in the park, but they’re kept out of the villages with electric fences. 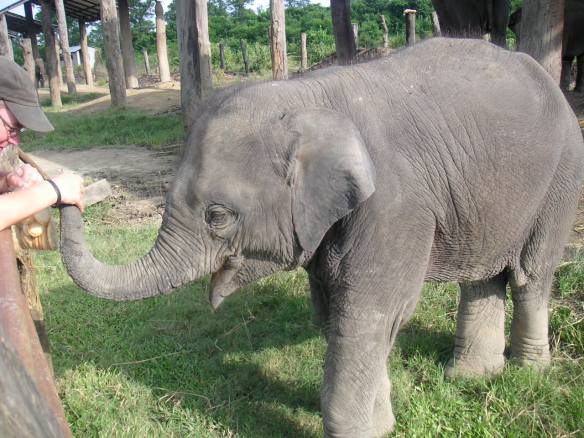 So, we took the canoe back across the river, and in doing so drifted past 30-odd water buffalo swimming and bathing alongside us!
The walk home was hot, and filled with goats being shepherded around. 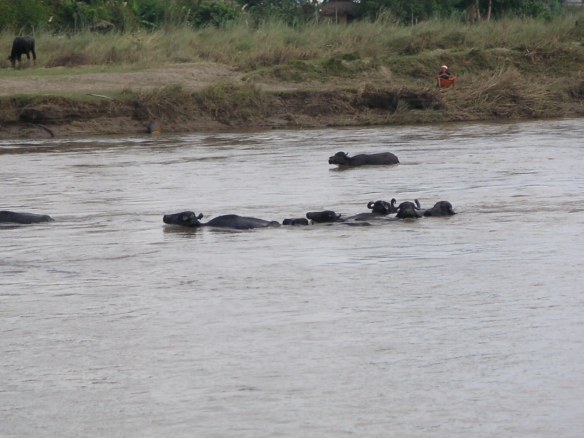 Buffalo swimming along next to us

On our last day here, both Dom and I copped out of the 5-hour jungle walk, as the heat was really getting to us (and I’d had a low fever for a couple of days so wasn’t at my best). We’re all feeling very hot, bothered, dehydrated and exhausted after such a jam-packed week of activities!
Instead we walked up to the shops (massively inflated tourist prices down here – internet use is 7 times more expensive per hour than Kathmandu!), and on the way home took pictures of the rural huts, made from a kind of reed, like a thin bamboo, tied together and coated with mud.
Our jeep safari in the afternoon got cancelled due to another protest blocking the roads, so I finally have time to sit here, under the ancient, rattling ceiling fan, and record my adventures  in my cheap little notebook for your delight! Tomorrow we head back to Kathmandu, where I can start typing up and sending these monstrously long emails!
It has been an incredible two weeks, packed with adventures and activities which I can highly recommend, so if anyone wants a holiday I’d be more than happy to come along and do it all again!
I think no matter what happens in the next ten months, I’ve already gotten more than my money’s worth in experiences, and I can’t believe I haven’t even been to the orphanage yet!
This has been the biggest and most exciting adventure of my life so far and I can’t wait to see what’s next!
tons of love and kisses,
hot-and-happy-Maya
xxxxxxxx
(p.s. – due to the heat and mild fever, I’ve hardly had any appetite at all – a first for me! I feel like I’ve sweated out at least a stone by now, although I’m sure I haven’t really!)