Wednesday 5th September 2007
Well, Omar is ok, although he hasn’t come back to the orphanage, he’s been sent to his guardian’s house and the police are going to try a bit harder to find his family.
Now, on to more pressing news!
On Sunday, at 4pm, 3 bombs exploded simultaneously across Kathmandu. One was on a mini-bus, one was at a bus stop outside a school, and the paper didn’t give details of the third one, except that it was somewhere in Sundhara.
2 people were killed (one was a high school student waiting at the bus stop) and lots were injured, including 5 people who are still critical.
Two different underground groups have claimed responsibility, the Terai army, who are a smallish group, and the Nepal People’s Army (NPA) a slightly larger group who claim the attack was aimed at monarchists, and apologised that civilians were injured!
They have stated that they will not rest until Nepal becomes a republic and the monarchy is abolished. It seems a bit of an unrealistic goal, although lots of people seem to feel that way, and there’s a big Constituent Assembly election on November 22nd, so it could well happen.
There are 7 major parties who seem to be in a kind of coalition running the government at the moment — last November the Maoists were given seats on the assembly, but the papers argue back and forth over whether they are recognised as the eighth party or not.
Anyway, it’s clear that in the run-up to the election there’s going to be plenty more strikes, protests, sit-ins etc, and the government have stepped up security around the city to ensure that the elections can go ahead without being postponed/disrupted.
One of the other volunteers here, Dom, was delayed by a week going out to Dang, in the south-west, because protesters burned three buses, and the bus company suspended all services on that route until someone paid for the damage!
I even saw a protest first-hand the other day. I was walking down to the shops to use the internet, and as I came around a corner I saw about 30 policemen and women pouring out of trucks and forming a blockade across the road, holding sticks. I hesitantly asked one of them if it was ok for me to go past, and he smiled bemusedly at me and said of course it was (crazy foreigner!).
On the other side I could see a crowd of protesters walking towards us with banners etc.
I kicked myself for not having my camera on me, and stood to the side to watch. They reached the police blockade, and had a bit of a shout at the officer in charge. He replied very calmly, and they clearly weren’t going to be allowed through.
Then the guy with the megaphone told everyone to sit down in the road to block traffic, although it was a rather empty gesture as the police had already blocked off the road!
I was watching with interest to see what would happen next, when I suddenly realised that the crowd had come up behind me and I was standing in the middle of it all!
As I didn’t know what they were protesting I thought I’d better move along before someone thought I was involved.
Later on, I came back up and they were still all sat in little groups in the road, chatting away (mostly older women who I suspect may have only come along for a gossip anyway).
The police had abandoned their blockade and were sat around in little groups chatting too.
It was all terribly peaceful and calm really.
Anyway, having been reading the newspapers a bit more recently, to follow the political drama, I couldn’t help notice some rather python-esque pieces. Headlines like “Villagers beat up Maoists” and constant references to groups like the PFN (People’s Front of Nepal) amd NPA. Maybe it’s because I’ve been reading too much Michael Palin, but I kept expecting to see op-ed pieces about the Judean People’s Front vs the People’s Front of Judea!
What made it even sillier was the article directly below the coverage of the bomb blasts, (yes, this would be on the front page), which read as follows:
“NAC sacrifices goat to fix technical snag.
Nepal Airlines Corporation (NAC) failed to rid itself of the recurring technical problem in it’s Boeing 757 aircraft, despite its engineering department’s untiring efforts.
But believe it or not, Chief of NAC engineering department, PBS Kansakar found the root cause of the problem in his dream last night: God was angry as the corporation had not appeased him by sacrificing goats.”
In short, the de-icer wouldn’t work and the plane had to be grounded twice. After conferring with top management on the matter it was decided to sacrifice two goats, one white, one black, to worship Lord Bhairavnath.
Can you imagine that staff meeting?
What made it funnier was the next day’s paper, which had a big photo of the sacrifices taking place in front of the plane. 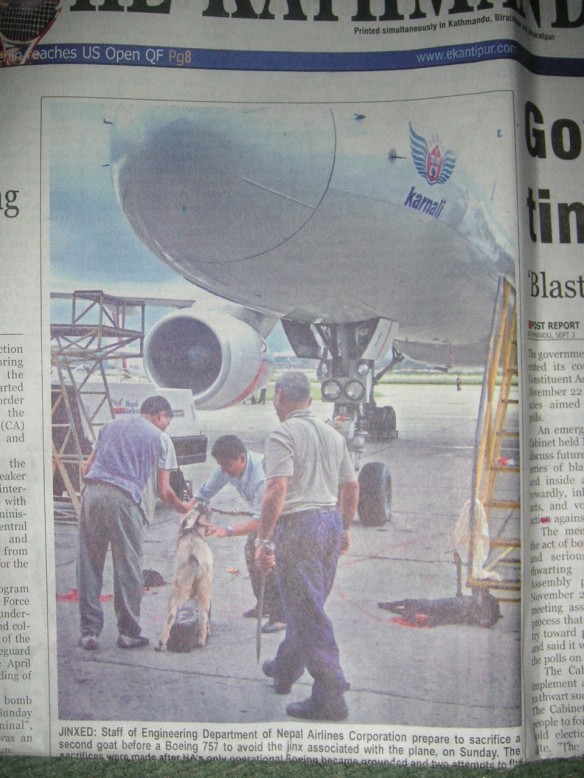 Anyway, despite all this hoo-haa and political unrest, you mustn’t worry about little old me. I’ll be safely tucked away in my little orphanage in the quiet suburb of Baluwatar in northern Kathmandu. It’s within easy walking distance of the British embassy (who I’ve registered with in case anything does go wrong) and across the street from us there is the best clinic in Kathmandu.
So, all is well, although I must admit that my adventurous nature is rather intrigued by all this instability – isn’t that awful?
until next time dear friends,
lots of love and hugs,
Politically-Aware Maya
xxx