Chitwan was awesome, we went on a jeep safari, saw loads of birds, crocodiles, elephants, deer, one tiger (but it was in a cage), and a wild rhino.
We stopped the jeep and all disappeared into the jungle for a pee, and suddenly the guide yelled for us to come and we ran into the woods and found a massive wild rhino eating grass in the woods about 50 yards from where I’d been squatting! 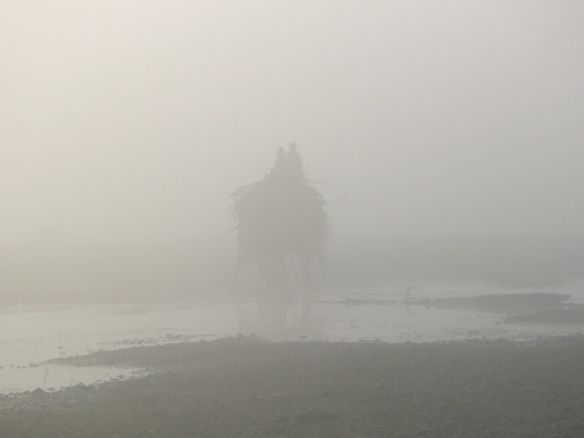 Elephant in the mist…

We also saw LOADS of people carrying huge bundles of grass on their backs, but when we drove past them you could see that it was wood hidden inside the grass. Apparently there’s a massive underground logging trade (sort-of) because the National Park is protected, and therefore locals are not allowed to remove any wood from inside, but they are allowed to take grass to thatch their roofs’ etc. So they find all the best wood and wrap it up inside the grass in a big bundle and carry it out of the park.
There’s loads of different types of wood and trees in the park, and they mostly take it to make the wood-carvings that tourists buy, as they can get a really good price for it.

It’s a dilemma really, because the illegal logging is destroying the natural habitat for the animals, but on the other hand, aside from stealing the wood, these people are making an honest day’s living which they would struggle to do otherwise. 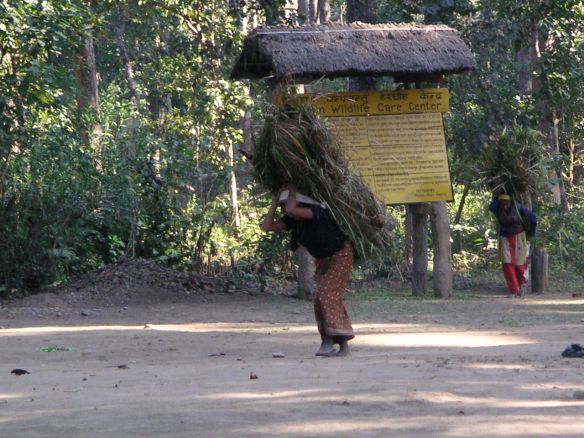 Nothing here but grass…

Anyhoo, the safari was great, then we had a lovely campfire, and filled in our questionnaires about how it’s been so far.
We were having a discussion about what could be improved, when the hotel owner came out to ask if local chicken would be alright for dinner.
We carried on our discussion and suddenly there was a shout and two lads came pelting around the side of the dining hall in hot pursuit of the chicken!

It was so funny to watch, and they were both laughing so hard they couldn’t catch it, and poor Hom kept trying to get us to focus on the discussion, while the mayhem continued around us!
Eventually they caught it, and I’m told it was delicious, although I’m still very much veggie and didn’t partake.

After we returned I got that awful depressed feeling when it’s winter and you’re not quite ready for the holidays to be over yet. Don’t wanna go back to work. Don’t wanna play with kids anymore. etc.
However, I’m also a bit down because all my mates over here have finished their placements (most of them were on shorter term projects) and have gone home, so it’s a tad quiet, and it’s still bloody cold and I hate not being able to shower – that novelty wore off a very long time ago and I really hate being dirty and smelly.

Also, now that it’s the dry season, we’re on a massively reduced power schedule (I think it’s because most of the power is hydro-electric and the river levels have dropped drastically sans-monsoon). The paper announced we will now lose 15 hours of power a week, so instead of the previous regulated power cuts every Sunday and Monday from 6pm till 8pm, it’s now at least 3 hours a day, but at random times.
Often it’s off in the mornings, which means I have to get up at 6am, and try to cook the dhaal bhaat in the dark, which is a lot less fun.
Also it tends to cut out exactly when I’m writing a really long email in an internet cafe and haven’t saved a draft.

Also HGG (Hot German Guy) is being elusive and sending me cryptic text messages, which I can’t figure out because they’re really abrupt, which might be cos he’s German, or possibly just doesn’t like me – impossible to tell.

There’s lots of other stuff going on what with politics, bridges collapsing, and things with the kids, but I’ll save all that for another email. I don’t know if I’ll get my arse in gear to write again before I go into intense meditation, so you won’t be hearing from me for a while.
I go on the 14th, and don’t get released until the 25th, so will be utterly incommunicado until then.

For anyone who doesn’t know what I’m doing, it’s a ten-day meditation course during which I am not allowed to speak, smoke, eat chocolate, touch anyone else, read anything, listen to or watch anything, exercise, write anything, or basically do anything except meditate, which I will do for ten hours each day starting at 4am.
Why am I putting myself through this?

To raise money for the lovely orphans here in Nepal, so anyone who still wants to donate, there’s plenty of time, and the website is: xxxxx

Anyway, I’m sure I’ll be feeling much better after I’ve contemplated the meaning of life for a few hours, and if I’m not then I may just have to smother myself with my meditation cushion.

Either way you won’t know about it for two weeks,
– how’s that for suspense?

1 thought on “A wild rhino watched me pee…”