Well, it’s been a hell of a week, possibly the most intense since I got here, and I’m definitely going to need to have a break soon!

On Monday morning, I cooked the Dhaal Bhaat as usual, but someone said Motilal wasn’t well and wouldn’t have any. I saw Motilal at lunchtime, and he looked alright, said he had a stomach ache, but he was lying in the sun on the roof and seemed pretty happy.

I carried on teaching and at around 2 ish, someone came down and asked for the thermometer, cos Motilal was really ill. I came upstairs and the poor boy was lying under a duvet shuddering uncontrollably. My little thermo-strip thermometer on his forehead went up to 104, which is as high as it goes, and he was clutching his side in pain. It was his right side, and when I gently prodded him, well, I think he would have screamed if he’d had the energy.

I looked at Aamaa, but before I had time to say anything, she said “Appendix, yes?”, and I agreed, so she sent someone off to get a cab and got dressed while I carried Motilal downstairs (he’s 11 but pretty small – all the kids here are tiny for their age compared to Western kids).

We went to the emergency room at the children’s hospital (which luckily happens to be about 500 yards from our house anyway) and had to go and buy the inpatient forms. There was a main emergency ward and then a little room where patients got initially diagnosed before going into the ward itself. We put Motilal on the bed and there was only one other girl on the bed across from us, who looked about 9, and I thought she was sleeping peacefully until Aamaa leaned over and whispered that she’d just died.
We had to wait an hour on a bench while they did blood and urine tests, and then they let us go into the emergency ward.

There were two or three kids on each bed, most of the sheets were recently soiled, (I preferred to assume it was spilled juice). There was such total mayhem – it was a small ward and for each kid there must have been about 6 relatives crammed round the beds, haranging doctors and nurses or rushing about buying medicine and forms and bringing blankets and food/drink. It’s a wonder the doctors could even get to any of the patients, although they seemed very unfazed and it must be like that all the time.

We had to wait for ages, as Motilal’s urine test showed an infection, so they weren’t sure if it was that, or appendicitis or both, and all the doctors were about 19, so we had to wait until 8pm for the “big” doctor to come and make a decision. He agreed Motilal would probably need surgery, but it took another 2 and a half hours to get him admitted. Poor Motilal was so scared, and the student nurses had a hell of a time getting his IV drip in, so I held him and hugged him while they poked him with needles again and again.

During the eight hours we were in the emergency room the little dead girl was still lying on her bed, (I kept noticing every time I went past), and no one had bothered to cover her with a sheet or anything. They may not have had the time or sheets to spare, but I soon realised it’s also a very cultural thing. I wanted to cover her up out of respect, but Priya told me firmly that covering a body like that straight away was incredibly disrespectful.

I saw her poor Dad sitting outside hours later. He looked so lost, like he didn’t quite know where to go or what to do. The term bereaved really doesn’t cover the look on his poor face, and I asked Priya if we couldn’t bring him a cup of tea, but she said no, Hindu’s generally fast when they’re in mourning (again, a very British concept that a cup of tea solves everything!).

Anyway, by 10.30pm, we finally got Motilal moved upstairs onto the surgical ward, which was thankfully much quieter and calmer.
Aamaa wanted to stay with him, so we popped home and brought her some blankets and hot tea, and then went home.

Tuesday I was up early cooking food, knowing Aamaa wasn’t there, and managed to get everything done by 7 so I could go back and relieve Aamaa. Anil had some friends staying anyway so there were lots of people to watch the kids.

By lunchtime they’d agreed it was ok to operate, and we got him into his gown and went to surgery. I’d hoped that they’d let one of us go and hold his hand while they put him under, but we weren’t allowed for hygiene reasons. They’d just led him off down a long corridor and firmly locked the door, when Aamaa came rushing in. We banged on the door, and they brought Motilal back. I thought Aamaa wanted to give him a kiss or hug, but she pulled out a little packet and whispered some prayers while putting tikka on his forehead.

Then they led him off again and left us in the ante-room, but the doctor put his head round the door a minute later and said we’d better go and buy the anaesthetic!

I still can’t get my head around the fact that you have to physically buy everything here yourself – we must have gone outside to the pharmacy a dozen times to buy IV bottles and syringes and painkillers etc.
Priya came back with an ampoule of something and they got under way.

After it was all done the doctor came out and showed us the appendix, and they took Motilal to the recovery room. Poor kid was really sore and tired and confused and groggy, and mostly slept a lot or moaned when it hurt.
Priya stayed with him that night, along with a lovely social worker who’s friends with Aamaa and had offered to help out too.

On Wednesday he looked even more miserable than usual – he was still scared and in pain, but just wanted to go home and kept crying. He looked so small all curled up on the big bed, but there wasn’t anything we could do.

I stayed overnight at the hospital to give Aamaa and Priya a break (Aamaa had also found out on Wednesday that one of her husband’s friends had died suddenly). There were wooden boxes under each bed, to store stuff in, but big enough to lie on, so I slept on that next to Motilal’s bed.
On Thursday morning I went outside to buy some tea and biscuits, as the nurse had said Motilal could start eating again, and on my return I was rewarded with a little smile and a small voice that said “Can I have a biscuit?”. It was honestly the best thing in the world to see him smile after so many days of pain and crying.

By 7.30 Priya came and packed me off home to get some sleep, and Motilal was feeling miles better by the time I came back in in the afternoon. He even asked if he could play the games on my phone! (I’d brought books and cards and my ipod to keep him amused, but he’d been too miserable to want anything until now).
Thursday night Priya’s husband stayed with him, and on Friday the doctors declared that his infection had gone and he could go home (it turned out he had had both poor love – appendicitis and a urine infection at the same time).

We went home all smiles and he’s been loving all the special privileges since being home. The kids usually sleep on mats on the floor, but as he can’t get up and down easily, he’s on Anil’s bed, which happens to be in the room with the tv!

He’ll be on his feet in no time, and is already smiley and happy as he ever was before!

Anyway, it’s a happy ending, for Motilal at least, although I had more stress to come, but I’ll save that for the next email!

The nurses were lovely, I must say, terribly sweet and caring, and although the emergency ward was a bit scary, everything else was pretty well done for a government hospital.

Now, just got to get the poor dead girl and her dad’s haunted face out of my mind…

Motilal is a very sweet and quiet boy who likes to drink his morning tea by himself in the sunshine. 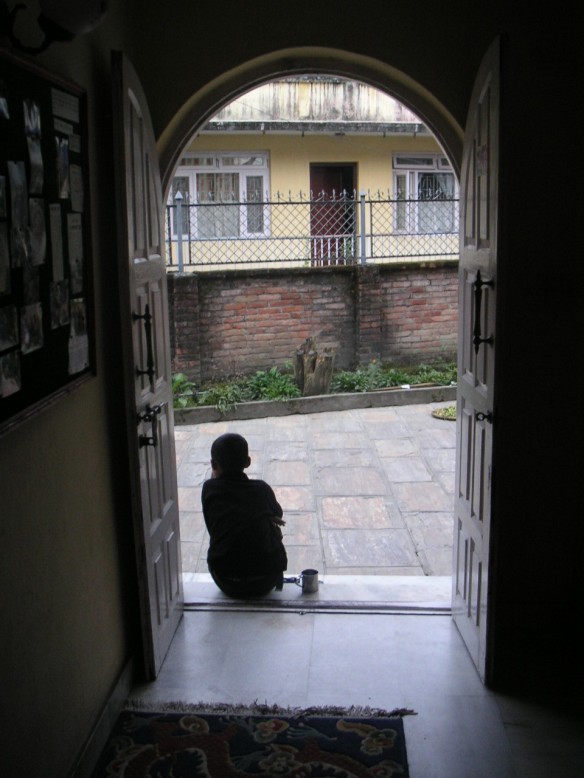 1 thought on “The Kanti Children’s Hospital”