Monday 14th April 2008
Well, the election went surprisingly smoothly, despite a lot of disruption beforehand. There were lots of bombs going off all over the city the week before, but they were very small and not designed to hurt anyone really, just to scare people.
There was a bit of violence a couple of days beforehand – 5 Maoists got shot by the police in a rural village, which caused a minor stir, but nothing much else.On election day itself we went up the road to take photos of the polling, and it really was very quiet and calm. There were big crowds of people, but they lined up in an orderly fashion, and had separate queues for men and women, and private booths separated by curtains. There were several policemen on the roof of a neighbouring building keeping an eye on things, and clear signs telling people how to vote properly, and reminding everyone that smoking and guns are not permitted inside the voting area. 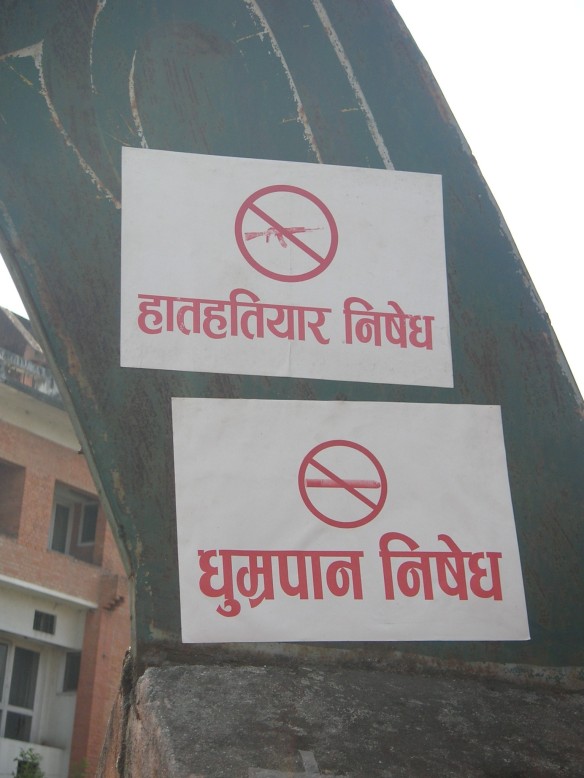 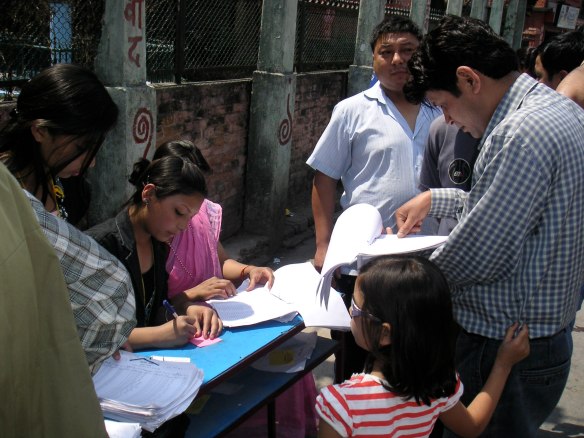 There was an enterprising corn and peanut seller making a small fortune off the crowd, and the roads were completely empty and peaceful. 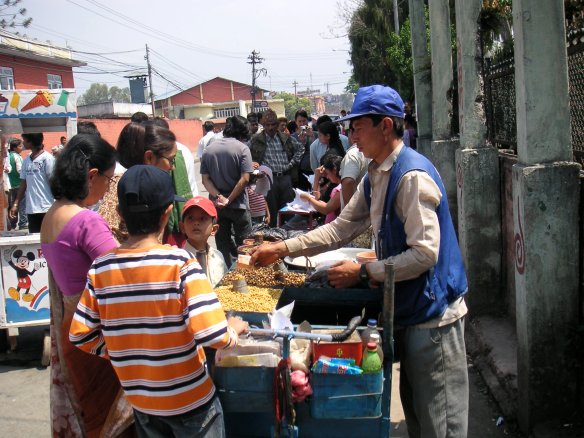 The government issued a directive to ensure a quiet election by banning all vehicles except for ambulances, police trucks and press on that day, and alcohol was banned for 3 days before and after the election as well to help reduce violence. The newspaper reported that there had only been 8 deaths in the days before the election, and only 1 election candidate had been killed, which was “well below expected numbers” and everyone seemed generally quite chuffed that only 8 people were killed, although I’m sure their families felt differently.

There were some fantastic stories too, like one woman who was so determined to vote that she refused to leave the line when she went into labour and ended up giving birth in the queue! Another man from a village, who had been born without any hands or feet, rolled for four hours to get to his nearest polling station to cast his vote. He left his house at 3am to ensure he would get there when they opened at 7am, and then had time to rest and roll home again!

We are still waiting for the results, as they are trickling in slowly, and many areas have to still be re-polled, but it looks as though the Maoists are leading by quite a massive margin, although no one really predicted that!

The two major english newspapers here, The Kathmandu Post and The Himalayan (both of which are currently running free ads about our fundraiser every day until Friday thanks to me! Am very chuffed!) are rampantly anti-Maoist, and are reporting the changing political tides with a very careful step!
It’s amusing, they’ve both been slagging off the Maoists for months, and are suddenly like “well, the people have spoken, and decided to put their faith in the Maoists…”

I suspect they will have a very sudden political change of heart very soon! Preparations for the fundraiser continue to get more and more frenzied. I got really really fed up last week of dealing with such incompetent fools, and hate that I have to do everything myself if I want it to get done.
I wondered briefly if I was turning into a power-mad dictator, much like several bosses I’ve had in the past, who insist on interfering and refuse to delegate anything at all, and then complain that they’ve got so much work to do!

However, although I have become very short-tempered and irritable with all the stupid people, I looked back over the jobs I had allocated and decided I’m not being a dictator, despite my naturally bossy nature, they are just all really really ridiculously incompetent.

Example number 1: Priya, my Nepali “sister”. I gave her a list of things for her to do about two weeks ago, things that we aren’t able to do, like get all the Nepali songs we need onto a cd, and organise the banner (we don’t know where the shop is, but Priya “knows a guy”) etc. I reminded her she’d need to get on and do those things before the election and New Year as there’s a long public holiday and everything will be closed.
Despite a couple of gentle reminders, by Wednesday last week, when I asked her if she’d done ANY of it yet, she said in surprise “No Maya! Now everything is closed until next Tuesday.”
…………….. (count to ten, count to ten…….)

So none of that got done, and despite the fact that it’s now only days away Priya keeps assuring me that she’ll sort it out. (Although I had to spend 3 hours traipsing around various shops looking for the bloody cds anyway, as Priya decided as I had the money, I should do that!

Example Number 2: Karla – the lovely Finnish girl who’s volunteering with me. She’s a real sweetie, but has her moments too. She had some really creative ideas about doing a photo collage on our donation box, so I happily turned that job over to her, and explained that she was free to do whatever she liked with it, and needn’t check with me.
She wanted to print the words “DONATION BOX” on the computer, but after a week of trying eventually came and asked me to do it, as she couldn’t figure out how to make the paper landscape instead of portrait.
I calmly added it to my to-do list, and secretly called her a total moron in my head.

Then I asked her to put up some of the posters for me, as we had to go all over town and I suggested we split up to cover more ground faster. However she said she’d feel more comfortable if we did it together, so we BOTH walked all over bloody town together, and I held the posters while she put the tape on. (SERIOUSLY! Who needs help to stick a poster on a wall??? Really!)

Example Number 3: Amy – the other volunteer. Amy is very nice, and quite shy but utterly and annoyingly unable to do anything by herself. She’s the oldest of us, at 34, but defers to me on everything, which is a bit flattering but also extremely tiring. She is desperate to help and have a job to do, but explaining things to her takes far longer than doing it myself, as her English isn’t brilliant.
Today she came to tell me that she’d given the kids some paper to colour pictures on, and was that ok? I soooo don’t care, and it’s not like I’m in charge of the bloody orphanage!
Anyway, I finally found something for her to do, as we need someone to be in charge of the music and make sure the right cds are played at the right time.
It seemed like such a simple job, I was sure a 34-year-old woman could cope with it.

Clearly I was wrong.

After the initial joy at being useful, Amy collapsed into self-doubt and questioned me for almost an hour about the order of the songs (I promised to provide her with a running list of the program so she’d know when each song is needed). She then worried about rehearsing – could she practice somewhere beforehand? (Practice WHAT? You press “open”, insert cd, press “play” and when the song is finished, remove the disc).
Then she asked me if we had any back-up copies of the cds in case she broke any of them, (the answer is NO! It took me bloody hours to find them in the first place!), and she got so worried that when she went out with her friends on Saturday night, she asked me to keep them in my room “just in case”.
What she thought might happen to the cd’s, sitting on a shelf in her room while she was away is a total mystery to me, but I’m starting to suspect she may crack under the pressure and need to be replaced as “chief cd-operator”, but we shall see.

In other news Nepali New Year has come and gone, so Happy 2065 everyone!
I really do feel that this might be a very good year for Nepal – everything seems remarkably calm and people seem quite hopeful that the Maoists will be able to make some real changes here.
It’s all a bit complicated, as this wasn’t actually a general election, but was to vote for the 601 members of the Constituent Assembly, who will write a whole new constitution for Nepal, so they’ll be starting from scratch.

One of the first things that everyone has agreed to do is abolish the monarchy (the last Hindu monarchy in the world by the way – I’m just full of useful facts!). However several papers have commented on how very attached the King is to his throne, and he may need to be forcibly removed, which could be awfully embarassing for everyone concerned!

Also our food situation is improving a bit. Despite the rising food prices, which of course everyone is well aware of, spinach has finally gone out of season and carrots are in!
Carrots!

I forgot how much I love carrots – I literally haven’t eaten them in almost 9 months, as they were so expensive and hard to get. Suddenly they’re everywhere and Aamaa bought a load of them for us to cook with. Even though we cook mostly the same thing every day, the different vegetables really affect the flavour dramatically.
So yay for carrots!

Also Watermelons are in season, and mangoes are on their way, so it’s now cheaper to buy melon and mangoes than it is to buy oranges or apples. (Oranges have soared from 20 rupees a kilo in September, so 75 a kilo now. Apples went from 35/kilo to almost 90/kilo. However onions have gone down, from 60/kilo to about 30/kilo, and watermelon is only 25/kilo – that means I can buy an entire delicious sweet watermelon for 95 rupees – about 85p!)
And that’s the economic report for today!

Well, that sounds like more than enough babbling for one email, so I’ll let you all know how it went after Friday, although I’m planning to disappear for a break shortly afterwards – hopefully to go for a short trek somewhere in Annapurna. I quite fancy walking up a big hill all by myself so I can be calm and quiet and away from all the very very incompetent people who I have to keep being nice to, as we live together.
Hope you’re all well and happy and fully appreciating how delicious carrots really are.

ps – I’ve just (literally just now) had an email from a guy called Giulio, an italian photo-reporter (on our “official” email) working on a project on children in Kathmandu. He’d like to come and visit us and take some pictures etc and discuss what we’re doing. I have no idea how he got our email address, but probably from our new website or the posters/flyers we’ve papered the town with.
Either way it’s rather exciting.
More on that next time…..