Yet another long update so soon?
Yes, well, there’s far too much to say, as usual, but I will try to keep it as brief as I can, for your own sakes! (Like I’ve ever managed that before!) 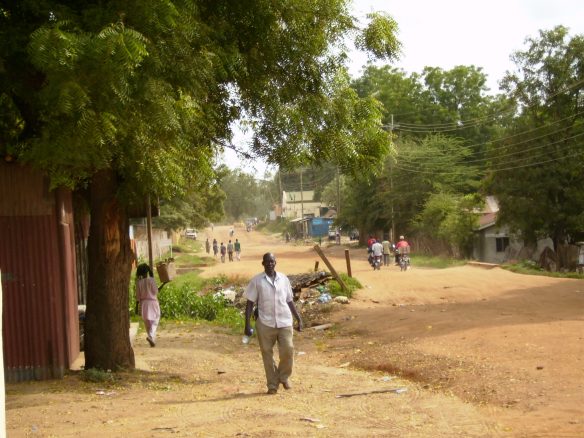 View from our compound

So, life in Juba…..
My first couple of trips out to the field have gone well. I’ve been assisting with a needs assessment CHF are doing, so it’s not really related to my research, but it’s good practice and helps me to get the hang of running focus groups etc. We’ve had a couple of minor security issues, but nothing major. Most of the time it’s just delays, as we often hear that the road to Yei or Torit isn’t safe at the moment, so we’ll have to postpone our assessment until the next day etc.

Coming back from Mangalla last week we were stopped at a checkpoint, and one of our local staff members suddenly popped out of the car to buy some mangoes. He’d jumped out so quickly, none of us had time to stop him, and as soon as he got out of the car, an extremely drunk SPLA soldier climbed in and asked us to drive him to the barracks a few kilometres up the road.

Almost all NGO’s have a strict policy about not carrying soldiers, and particularly about not carrying weapons in their vehicles. We tried to explain, very politely, that we couldn’t take him, and asked him to get out of the car. He said no.
There wasn’t really much of a discussion after that, as when a very drunk man holding an automatic rifle says he’s not moving, it generally isn’t wise to upset him! We attempted a few more tactics, and explained to him (very politely!) that we could take him if he left his weapon behind.

We all knew that wasn’t going to work, but we had to try anyway.
The soldier, to his credit, slowly seemed to realise that his gun was the big problem, so he thrust it at me, smiling and chattering away in Mundari, (and barely staying on his seat in the process!). I declined, as politely as possible, and explained that I definitely did not want to hold his gun, as it would make things a lot worse if we were stopped at another checkpoint – I imagine that seeing a soldier in the back of a car being held hostage by a white girl with a machine gun might not go down so well with the other soldiers!
When I declined his gun, our poor drunk soldier looked terribly confused, and then his face lit up with an idea, and he grabbed the gun and started pushing and clicking things, (while we all held our breath!). Eventually he managed to get the cartridge full of bullets out, and he smiled triumphantly at us, and tried to shove the bullets at Augustine to hold, while giving me back the gun, sans bullets.
Once again we had to go through the process of explaining why we really REALLY couldn’t hold his gun or bullets, and eventually there was nothing we could do but set off with him as our unwanted hitchhiker. However I must say, drunk as he was, that he really wasn’t very aggressive, and his attempts to give us his gun and bullets was a nice gesture – at least he was trying to show us that he didn’t mean any harm, and really did just want a lift!

So, after dropping him off, we made sure all our doors were locked, and then carried on home, incident-free. Lesson learned – no staff should ever leave the car at a checkpoint to buy mangoes!

In general we’ve also had a lot of breakdowns and flat tyres – the roads here are so bad that you need to carry at least two spare tyres per car, and get them fixed as soon as you arrive anywhere. In my first trip out to Liriya we had two flat tyres, and the water pump broke to we had to keep stopping to shake water out of certain parts of the engine!

In other news, there is a huge amount of wildlife here, even in Juba, in the town. There are some incredibly beautiful lizards, some are small like geckos, but most of them are about 6-7 inches long, and really lovely colours. They’re always skittering around our compound, as they like to come and bask on the concrete. On our drive up to Lobonok, I saw some monkeys, and some amazing birds – they looked like enormous herons – they were grey, with a white stomach and pink around their necks, with really long legs and necks. Standing by the roadside they must have been around 3 feet tall, and the wingspan was 4-5 feet! They were GORGEOUS and extremely elegant. 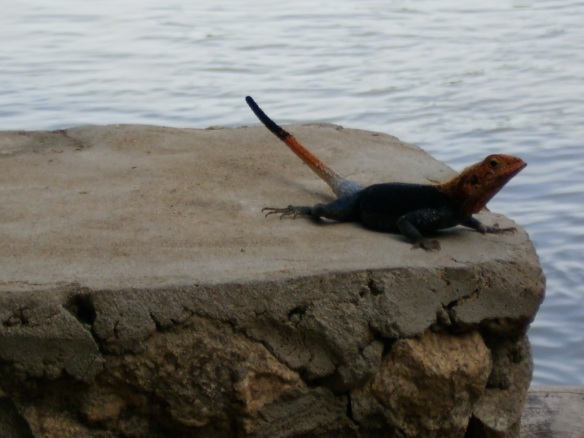 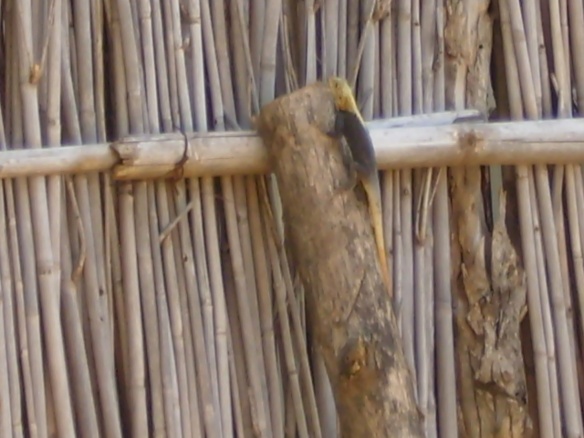 I’ve also seen some incredible butterflies, really huge and amazing colours too, and loads of frogs and toads. Most of the insects seem much bigger than the ones I’m used to, and unfortunately the ones I see most often are giant ants and cockroaches and less pleasant creatures!
However, I have gotten over my squeamish reaction to bugs, and frequently have to march around my room at night, squashing all the giant ants crawling around. I even managed to kill a giant cockroach all by myself, with my shoe, and I didn’t even scream! I’m very proud of myself!
However I have also learnt that, when entering the shower block, the trick is to open the door wide, and stand to one side while reaching in to turn the light on to give all the creepy-crawlies a chance to escape! The first time I showered, I just walked in, shut the door and turned on the light, and then to my horror found myself locked in a small room filled with lots of giant panicking bugs trying to get out!
Not pleasant. 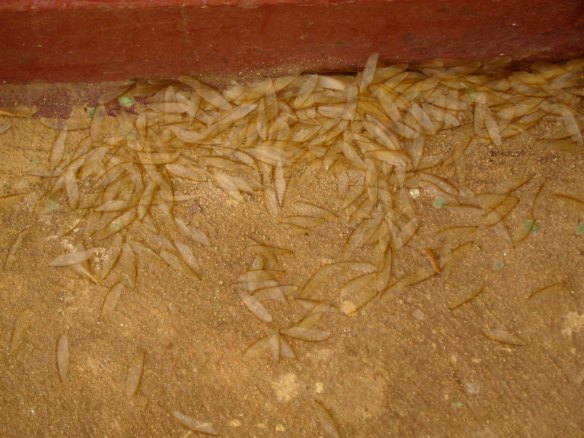 Hundreds of massive insect wings outside the shower block…. 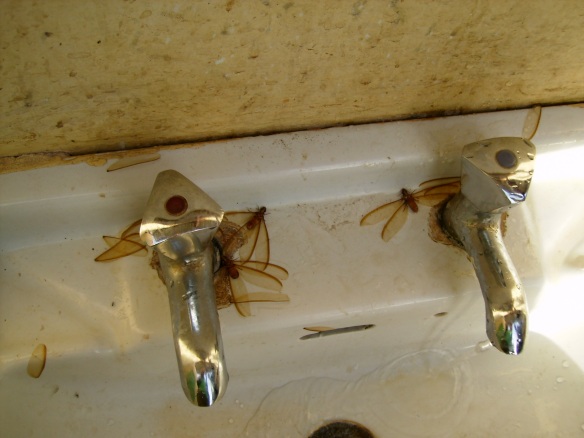 I also accidentally trod on a frog the other night in the dark. It was horrible – it went “squelch” and, as I was wearing flip-flops, I got splattered with bits of frog! (It was quite a big frog!) It was really disgusting, and I did squeal a little bit when that happened, and then spent several hours shuddering and scrubbing my feet in a mildy-OCD kind of way!

As for Juba itself, it’s an odd place that used to be a fairly sleepy small town, and in the last three years it has exploded outwards at an incredible pace! The population has grown exponentially, and the presence of so many NGO’s has artificially inflated the economy, so things are insanely expensive! There are some “posh” hotels down along the riverside, which have lovely outdoor seating areas, a bar, pool tables, football on the tv, but the rooms are mostly army tents – at $300 a night! They are now slowly started to build pre-fab houses to replace the tents, but it’s insane to think people spend that much. However, when all the NGO’s arrived in Juba, there was literally nowhere to stay, so anyone who had a tent could charge literally whatever they wanted – the laws of supply and demand I suppose. Nowadays there are more and more hotels and guesthouses popping up every day, so prices are slowly going down, but for staff who need to live here for a year or more, you could end up paying up to $9,000 a month to live in a tent!
It’s a very strange place. 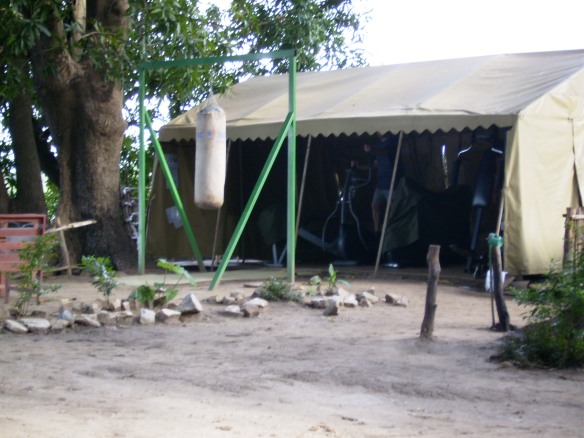 Also, the presence of NGO’s has clearly affected the smaller businesses in Juba, which can sometimes be very amusing! Our little local shop, right next door to our compound, sells cans of baked beans, coffee, pringles, coke/sprite/fanta, wine, tequila, toothpaste, and then has a whole wall of brand new hp printers, fax machines, scanners, photocopiers, paper, pens, etc! It is a seriously weird shop, but it just goes to show what the demand is for in this area! 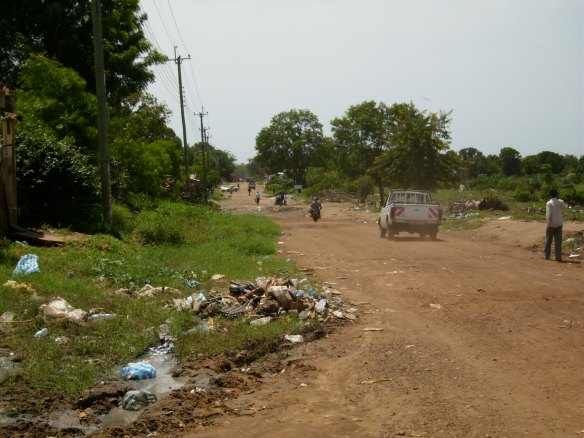 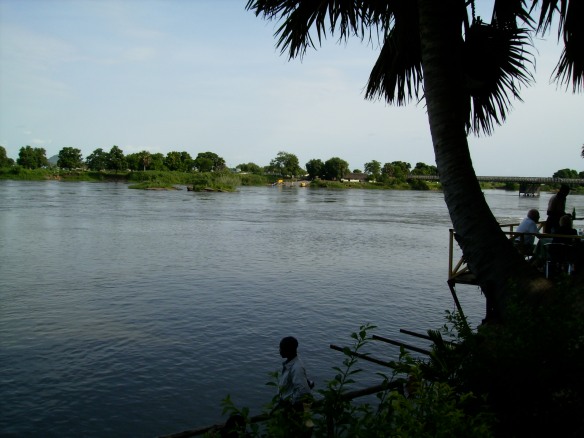 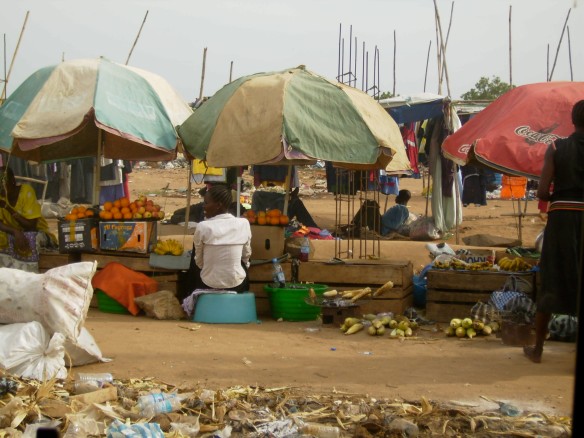 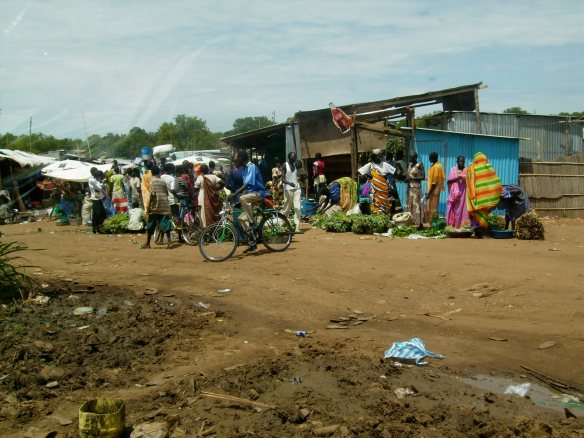 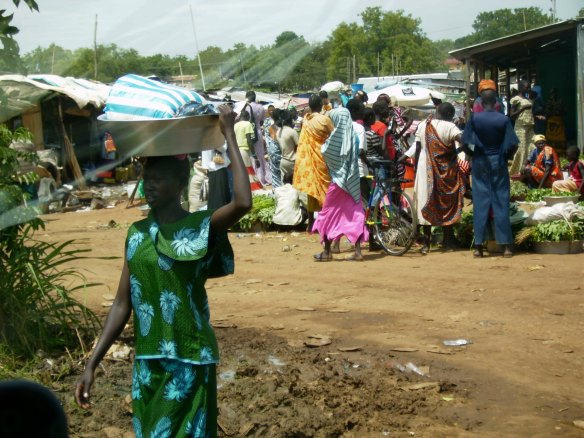 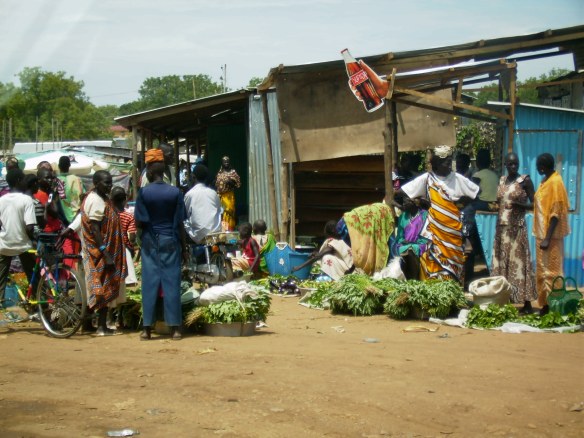 The rest of Juba looks a bit dirty and run-down. There are whole sections of town that are just rubble and trash, but this is mostly caused by a recent initiative by the Government. As there are so many refugees returning at the moment, a lot of them come through Juba on their way home. However a lot of them set up little temporary huts and settle in, as there are far more job opportunities in Juba than in the villages. The government are trying really hard to stop people from settling here, and are pushing people to return to their villages for a number of reasons.

Firstly, the rate Juba is expanding in terms of population is rapidly growing out of control and is overwhelming all of the services such as hospitals and schools.

Secondly, these sudden temporary settlements are a lot like shanty towns or slums, and the government understandably want to avoid any of those becoming permanent as they can be a massive health risk.

Thirdly, due to the sudden boom going on in Juba, the government are trying desperately hard to impose a certain amount of order and town planning, by keeping roads nice and wide, and keeping open areas clear for further development. It’s all very reasonable, from their point of view, but the problem is the method they’re using!

Simply asking people to return to their villages doesn’t seem to work, so the Government have started just bulldozing sections of town at random, houses, huts and shops and all. This generally does encourage people to move somewhere else, and several NGO’s have been asked by the government to provide transport out to the villages and basic food packages to get them started.
The government usually announce on the radio which areas they will be clearing in advance, so people have time to move their stuff, but it’s a tad extreme!

However it has made it hard for me to take photos around Juba – I’ve got a few here and there, but people get very upset if they see my camera out, as they think that I’m taking photos for the Ministry, to show them where to bulldoze next! 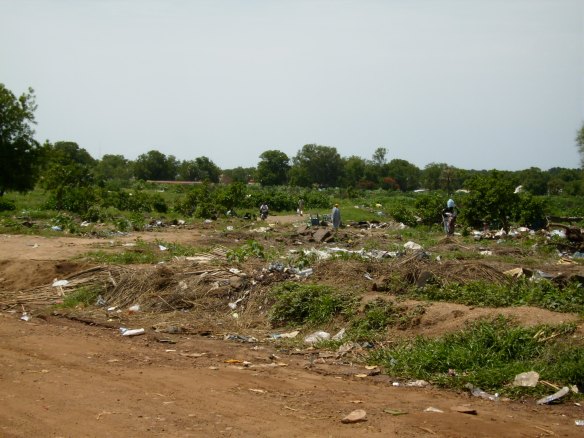 I guess that’ll have to do for now – there is honestly so much more to say, but I don’t know how much you can all stand to read in one go, so I’ll have to keep the rest for the next big email.

Ps – I saw the most incredible thing the other night too. I was walking home with a friend, and all the stars were out – they were lovely! Then I noticed the strangest thing – I could see the Big Dipper, and then directly opposite it on the other side of the sky, there was the Southern Cross!
I never knew that it was possible to see them both at once, and it’s a very odd feeling! I’ve always associated the dipper with the Northern hemisphere, and the cross with the Southern hemisphere, but I guess I’m close enough to the Equator to see both of them at once! 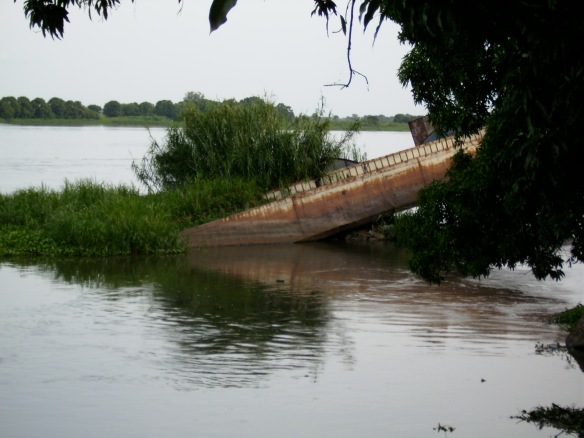