Ok, as you’ll have noticed from my recent posts, I just spent an incredible 3-day weekend at the Maasai Mara. I saw so many incredible animals and gorgeous scenery, and as I have so many photos to share, I’ve decided to split these into 3 posts, rather than try and ram it all into one.

First of all, the tiny plane I flew down on – it was AirKenya, and an 18-seater. I was pleasantly impressed and surprised to see that both of our pilots were female. 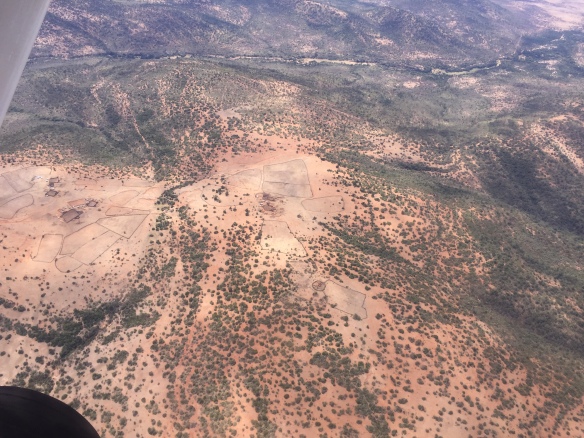 And here is our plane after we landed at Keekerok Airstrip – coming in to land I could see Wildebeast and Zebra along the sides of the runway, and was slightly concerned some of them might wander onto the runway as we came in to land – Luckily they didn’t. 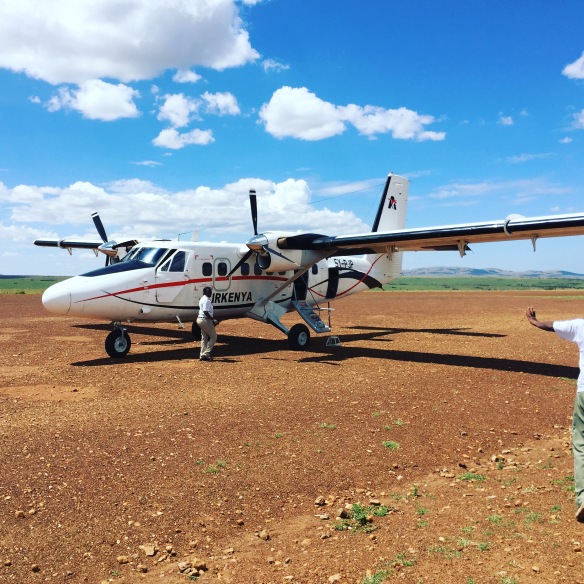 Literally the first thing we saw after I got picked up to join the group was a Leopard! They are one of the harder animals to spot in the wild, as they’re quite shy, so finding this one almost immediately was incredibly lucky! 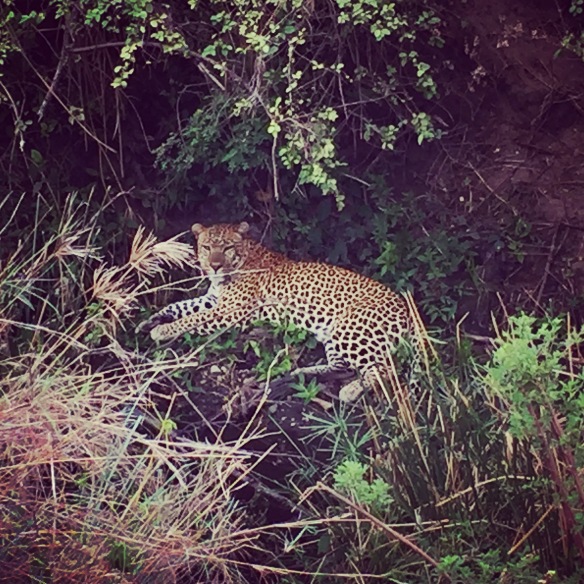 This research car belongs to “Mama Duma” – the cheetah lady, as the guides affectionately call her. She tracks and monitors all the cheetahs, and often stops to chat to the rangers and drivers to find out where cheetahs have been spotted recently, and copies tourists photos for their database. She told us they recognise cheetahs by their front legs, as the pattern of spots on the front legs is unique to each cheetah, like fingerprints. She also told us there are currently 57 cheetahs in the park. 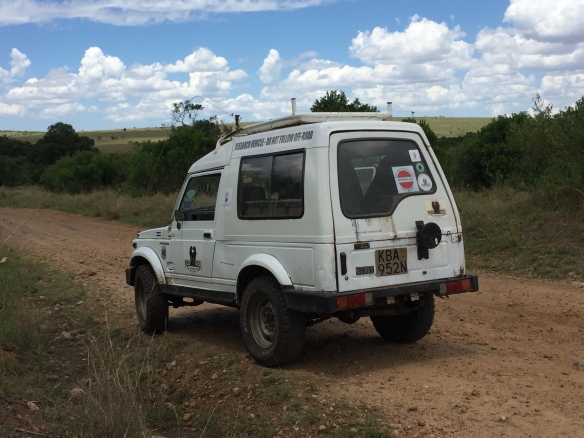 I think these are hartebeast 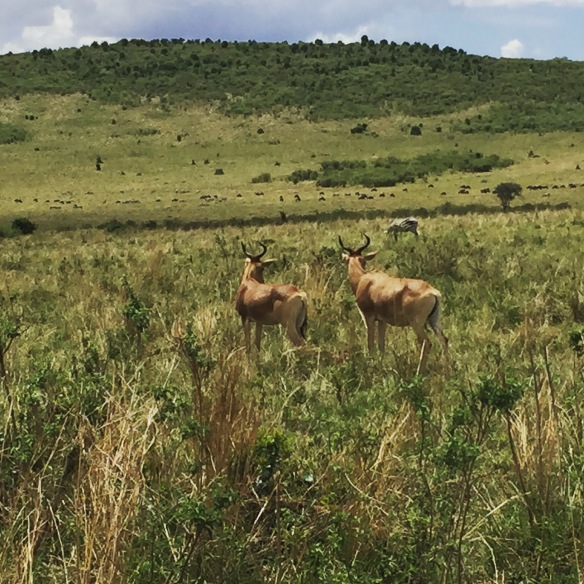 Small pride of lionesses and some cubs (around 6 of them here, lounging in the shade to avoid the heat of the day) 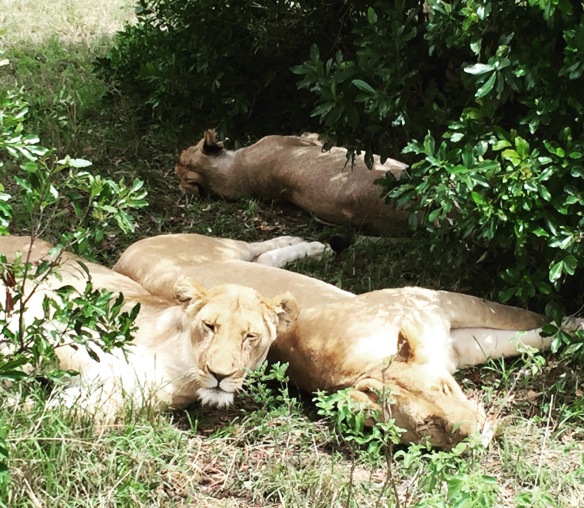 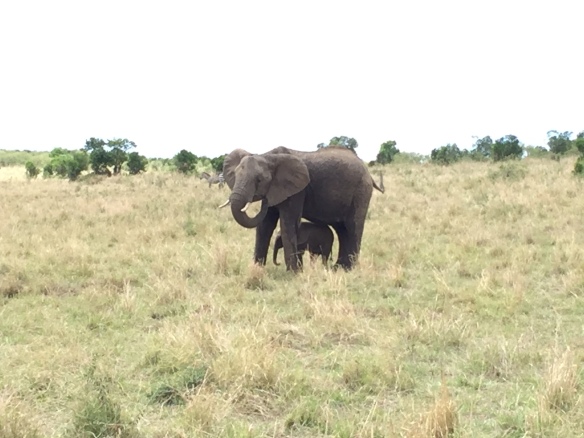 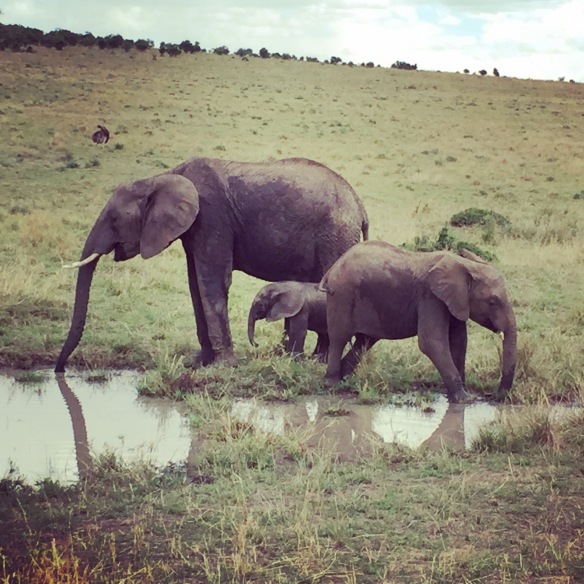 And off they go

And some more lionesses 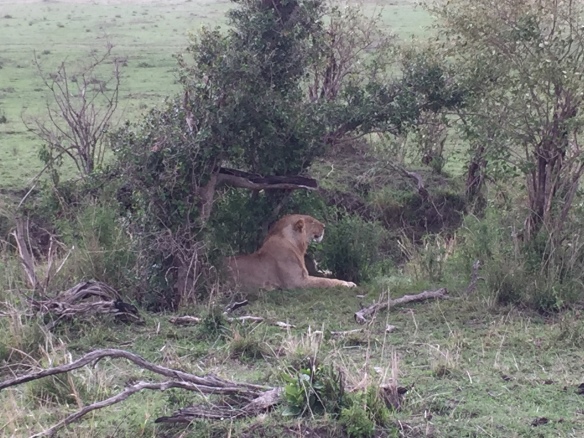 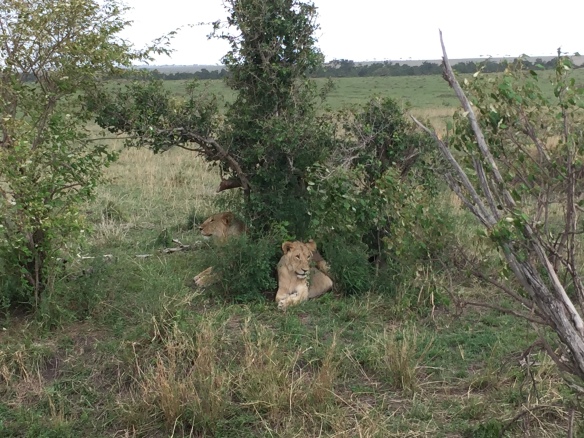 And a few young males as well

And some massive herds of Wildebeasts – pretty much as far as the eye can see. 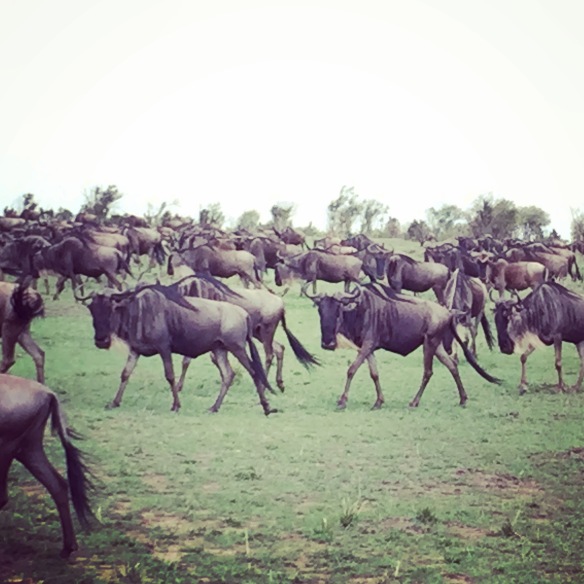 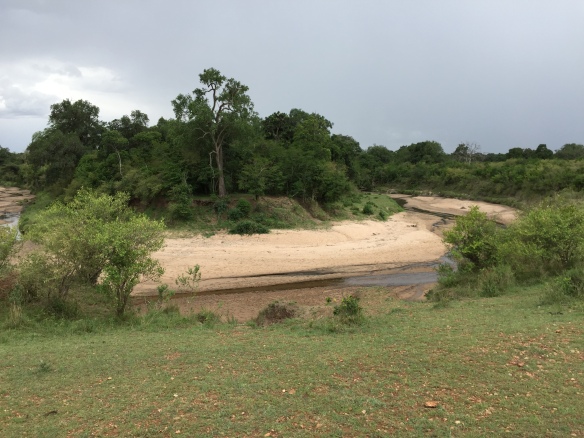 At the Kenya/Tanzania border marker

At the Mara River 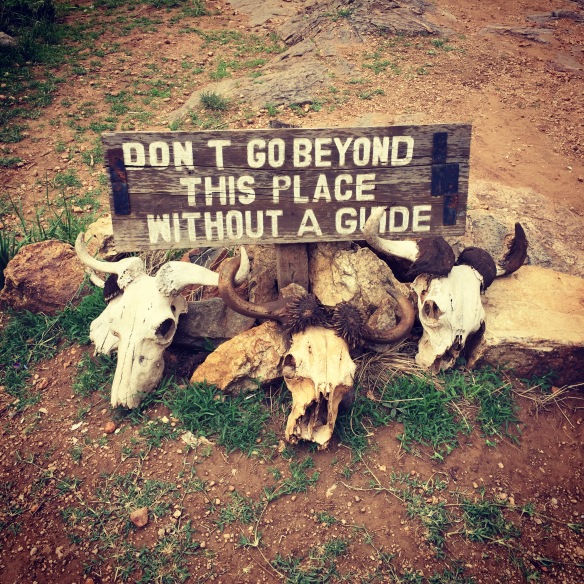 The Mara River – known for hippos, crocodiles, and the main river the wildebeast have to cross to get into the Mara from Tanzania 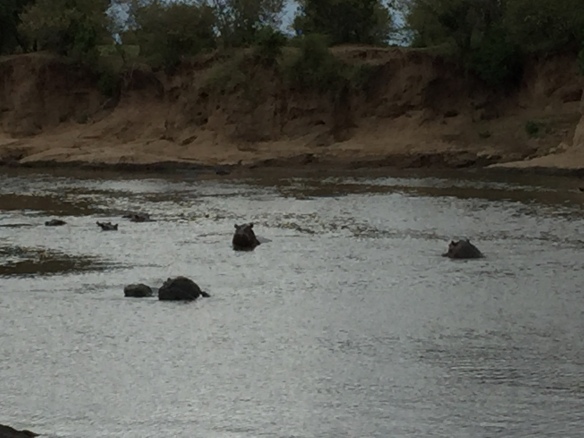 Literally tons of them – this was a family of hippos approx 15 of them, all hanging out in the middle of the river together

We had to take an armed guard for a short walk along the riverbank – apart from the danger of hippos and crocodiles, there are sometimes Cape Buffalo grazing along the banks, and stumbling across them by accident in the bush can be VERY dangerous. I’m told all you can do is climb a tree very fast if you want to survive an altercation with an angry cape buffalo. 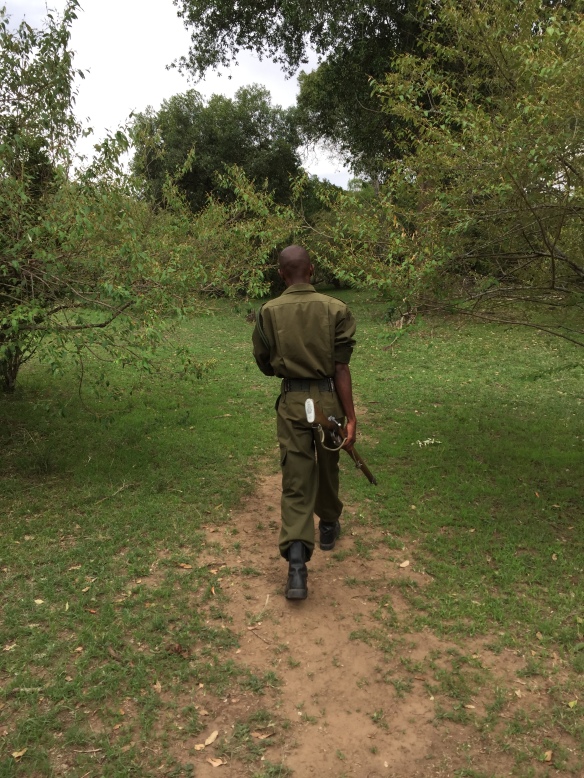 The guard helped us to spot many different animal tracks in the mud – including leopard tracks. Personally I’m quite proud that I can now spot hippo tracks! 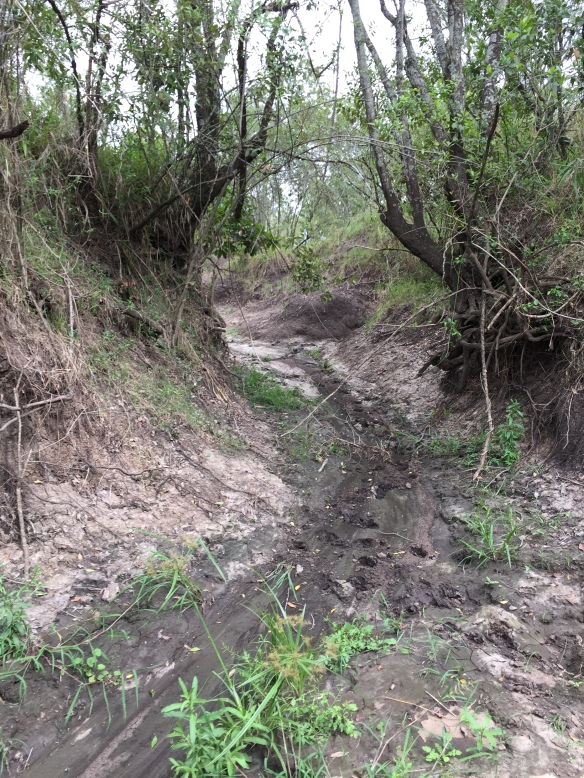 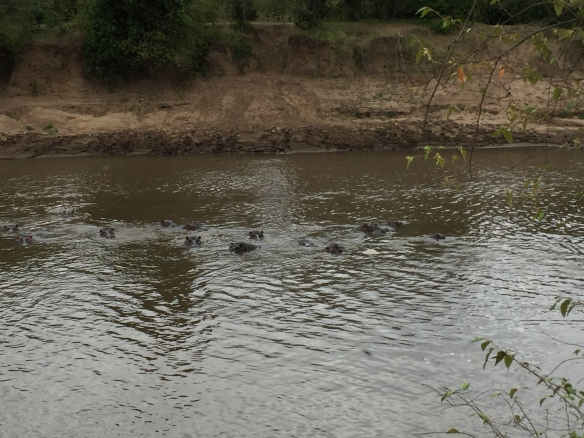 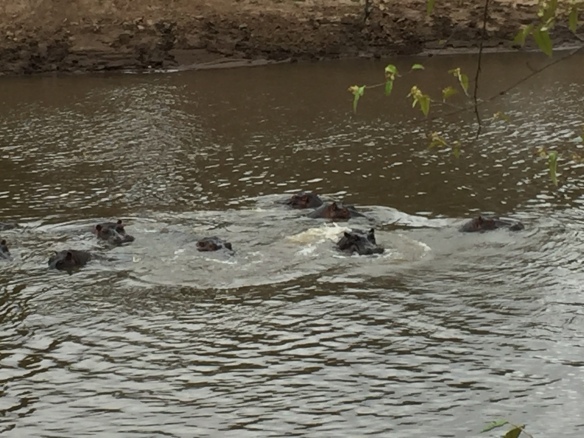 Here’s our little group from the bus, with our two armed guards. There were 2 Nepali UN peacekeepers (currently based in the Congo) and 2 Koreans from Busan, and an English guy. Amazingly I was able to remember a few words of both Korean and Nepali, and chat to both groups fairly knowledgeably about their respective countries, which I think they appreciated!

Stormy skies over the savannah

Some Olive Baboons hanging out

And a couple of jackals by the roadside – they looked a lot like foxes! 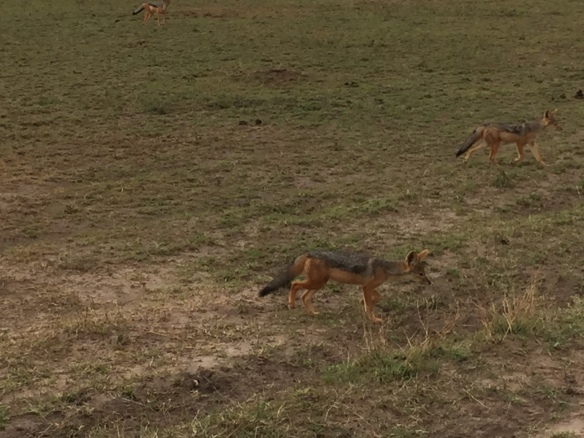 And then, towards the end of the afternoon, we stumbled upon a couple of lions, getting it on! I’ve already uploaded the videos if you really want to watch it live. 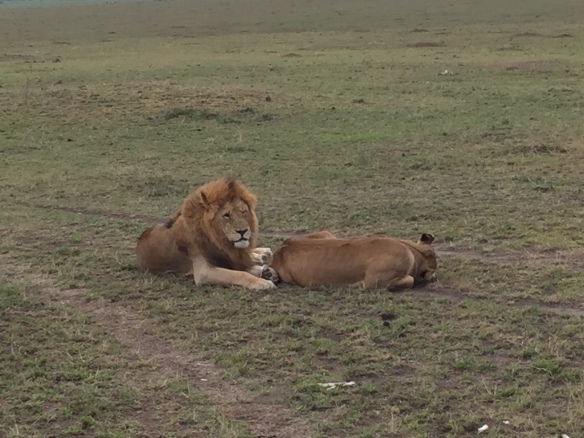 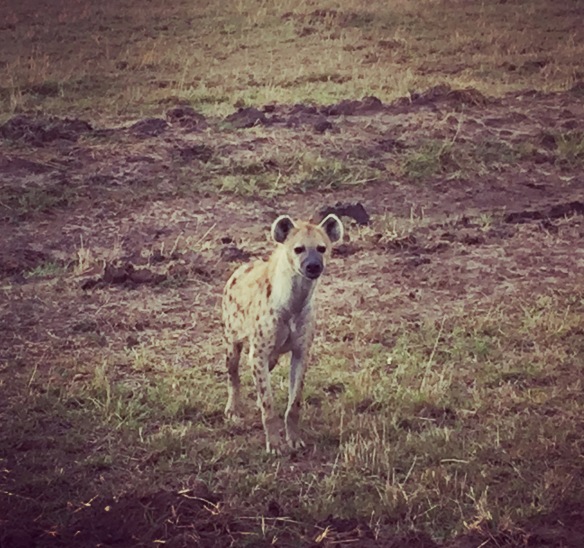 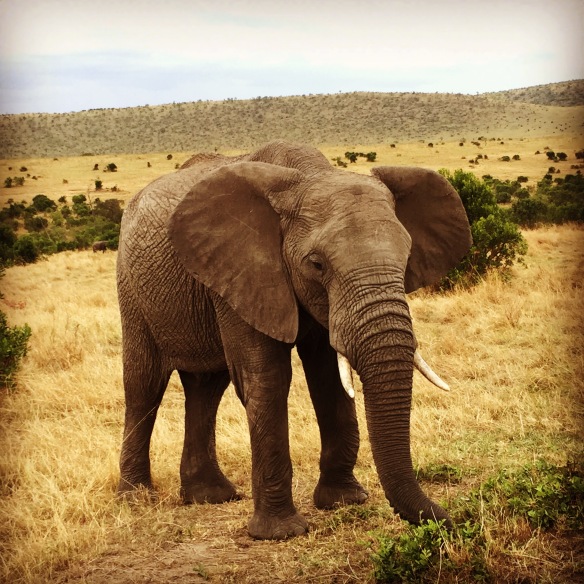 And some Eland – they’re the largest type of antelope, and have a big, wobbly, wattle on their neck.

And some vultures at dusk, doing their thing.

And some vultures in flight 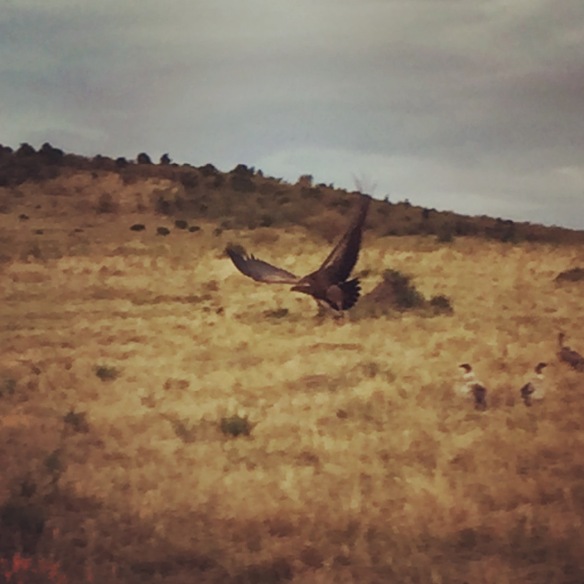 Phew! And that’s about it for day 1! It was a fun-packed day filled with amazing wildlife of all sorts! Suffice to say I slept extremely well in my tent that night!