After Havana, we set off on our tour bus to Viñales, a beautiful valley and tobacco-growing area, where we learned a lot about tobacco-growing, organic farming and cigar-rolling, as well as spending an incredible day out at “the most discovered undiscovered beach in Cuba” according to the Lonely Planet guide.

First we stopped at a glorious viewpoint over the valley. It was really stunning.

This selfie was taken just moments before I stepped backwards and nearly tripped over a bag with some sort of extremely large rodent inside it. It looked like a small, and longer-in-the-body raccoon. I later found out it was a native “tree-rat”, whatever the heck that is.

At the tobacco farm.

Tobacco leaves on the drying rack. The tobacco plant only takes about 3 months to grow, so farmers can get 3-4 harvests a year. When they harvest the leaves, you start from the bottom and harvest the largest leaves first, and then come back to harvest the middle and top leaves a few days later respectively. This is because they use the bottom, middle and top leaves for different parts of the cigar (filler, binder, wrapper etc) and they are all carefully graded for quality as well.

Here are all the leaves drying on the racks in the barn. 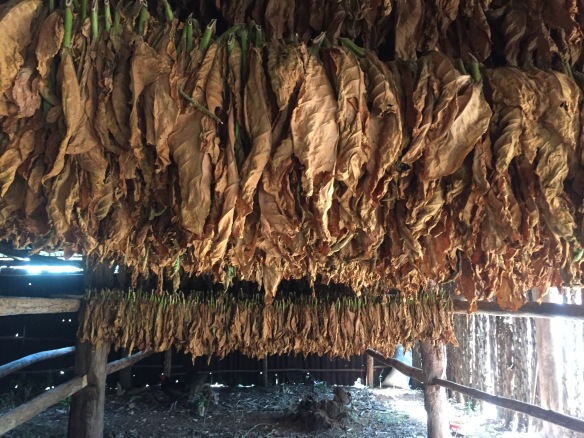 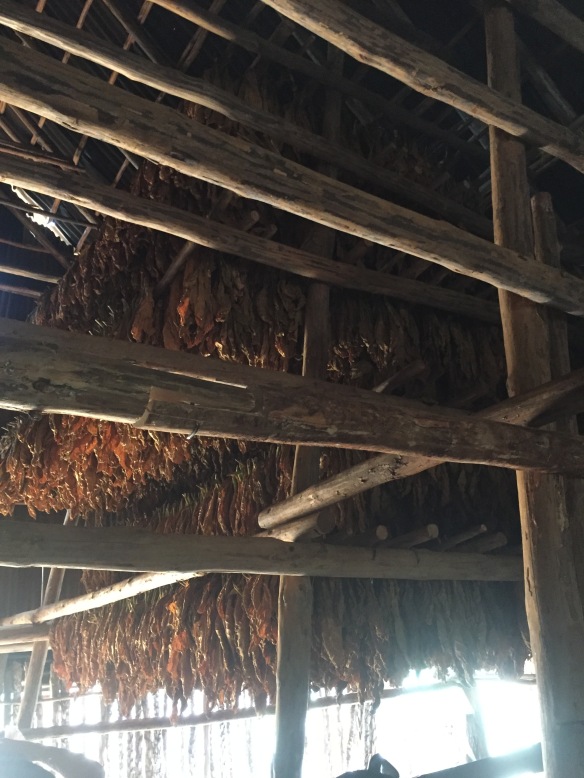 One of the farmers talks us through the process. After the leaves are dried, they are bundled into bales and stored for several months to cure, then they are moistened and dried again at some point as part of the curing process. 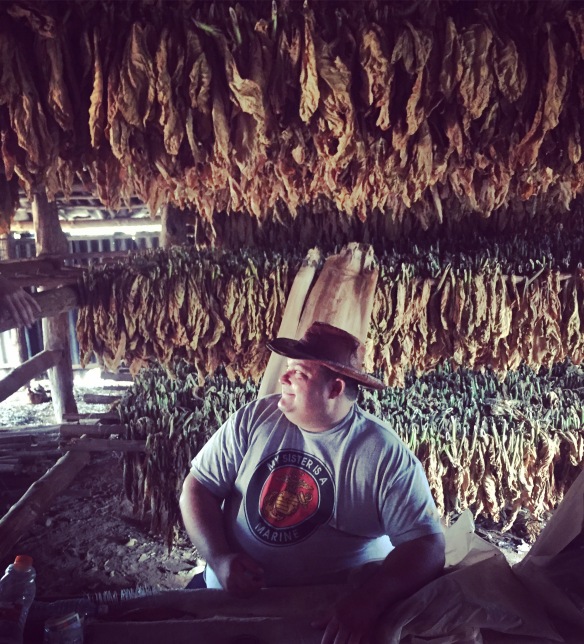 Then this dude showed us how they hand-roll cigars. Interestingly, I had assumed the tobacco was finely chopped up for the inside, like the strands of tobacco in a cigarette, but no, the leaves are stacked and rolled up whole. 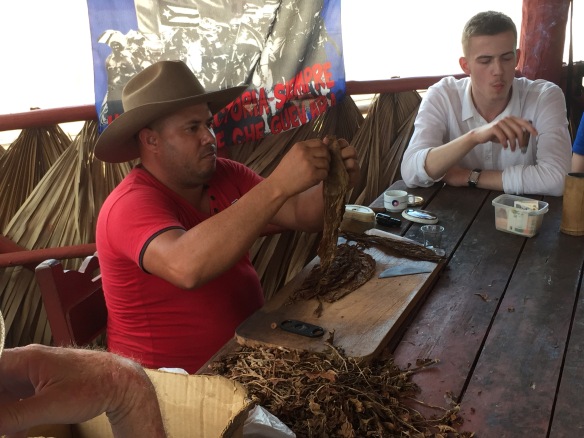 Although I didn’t try one (since I’ve given up smoking) I was intrigued to discover that the Cubans after snipping the end of the cigar, dip the end that you put in your mouth in honey, for a sweeter taste and a smoother smoke apparently. 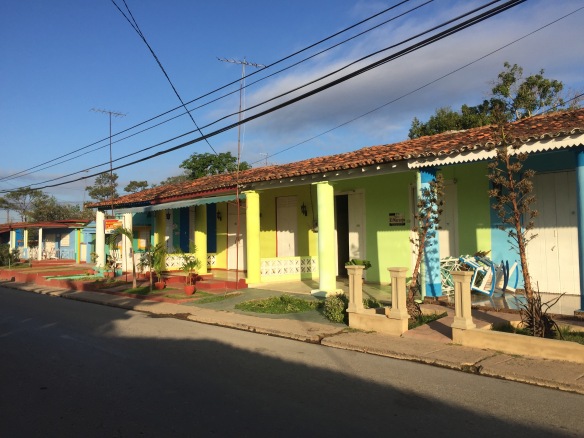 The next day, a sub-group of us from the larger tour group decided to spend the day at the beach, so we hired an 8-man taxi (expecting a mini-bus but loving the car that showed up). Vinales is not very close to the coast, so it took us about 1.5 hours or so to get there, but it was 100% worth it.

Here is our amazing big yellow taxi, looking remarkably like the Ghostbusters car….

A few other cars appeared down the beach, but for the most part we had the beach to ourselves (this is the most discovered undiscovered beach in Cuba). It’s actually a Key, joined onto the mainland by a thin strip of road, and we realised that if you walk around to the other side of the key, there were quite a lot of people, a bar, restaurant and umbrellas, loud music etc, but we were blissfully happy with our much quieter and more serene side of the “island”. 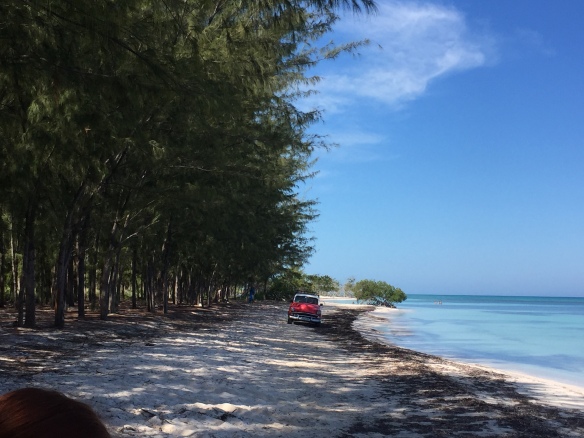 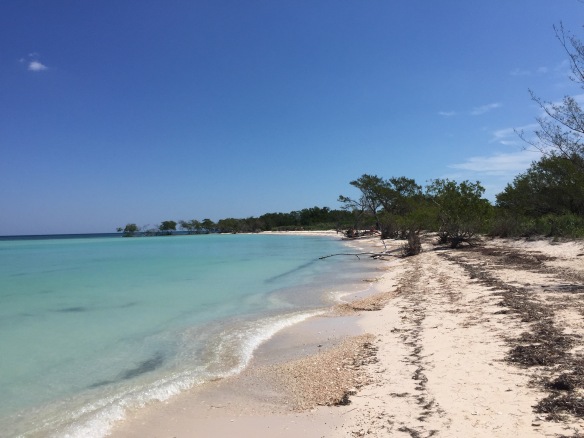 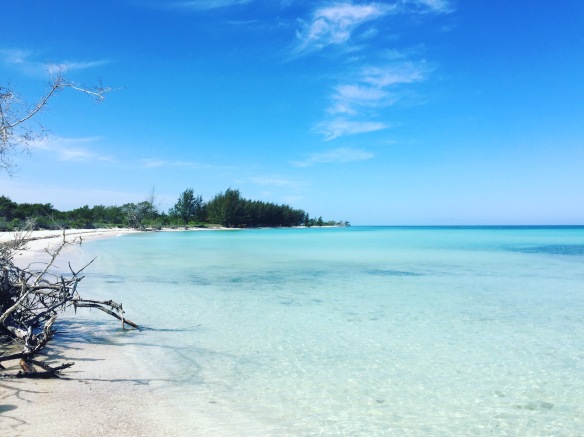 Even more amazing, when we arrived, a man appeared and asked if we would like lunch? Would BBQ lobster be ok? YES we replied, and it was DELICIOUS. Fresh as anything, and cooked right there on the beach for us.

The water was clear as a bell and warn as a bath – amazing. 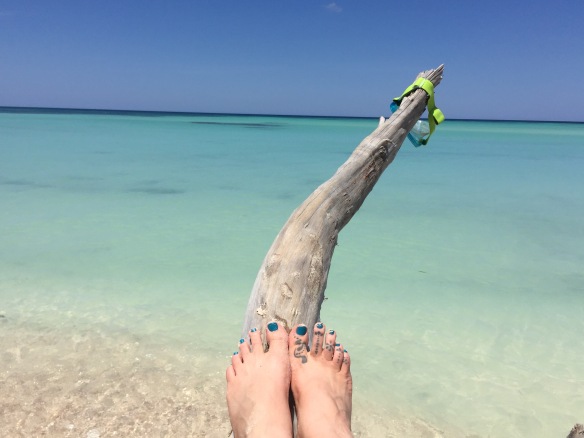 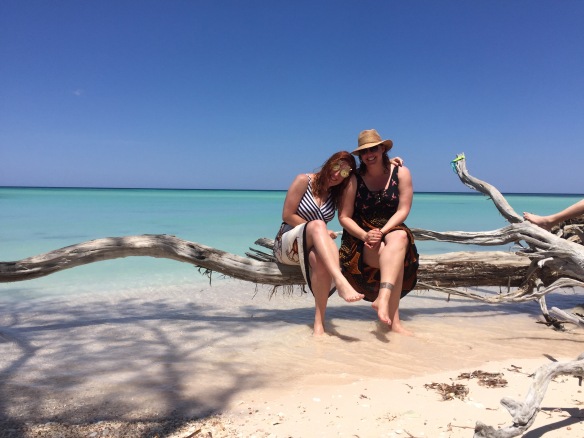 It was the most PERFECT day at the beach, although I did get quite sunburnt and eventually had to put my favourite comedy t-shirt on.

That evening after we got back from the beach, we went on a tour of an organic farm, and had a delicious dinner of local organic food.

Sunset over the organic farm.

We learnt some amazing ways in which they control insects without chemicals and pesticides. It was actually fascinating. For example, these little sticks with yellow, white and blue squares on – those 3 colours are known to attract certain flies and insects, and they paint the squares with honey or oil to catch the flies when they land on it. They also plant “dummy” crops like certain flowers to attract the insects away from the crops, or to attract hummingbirds which eat insects (we saw one!).

They use marigolds planted around the crops, as they have a natural insecticide, and some plants emit chemicals from their roots which kill larvae and eggs. All sorts of interesting ways to kill insects naturally! What was really sweet was that they learnt it all from one book that someone gave them! 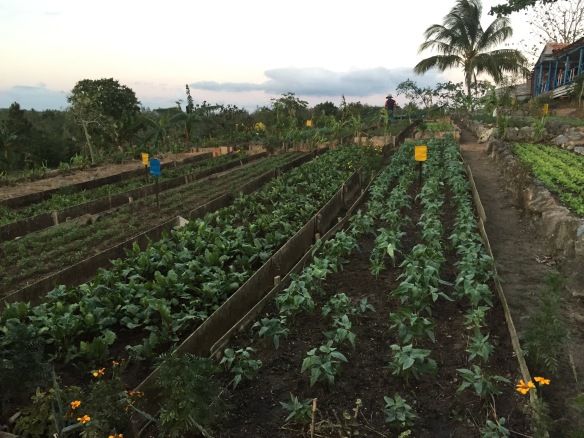 Someone who visited them suggested they change the shape of their beds into a flower shape. They plant the crops in the petals and decoy plants in the middle – they don’t quite know how it works, but insects are naturally drawn to the middle and not the edges. 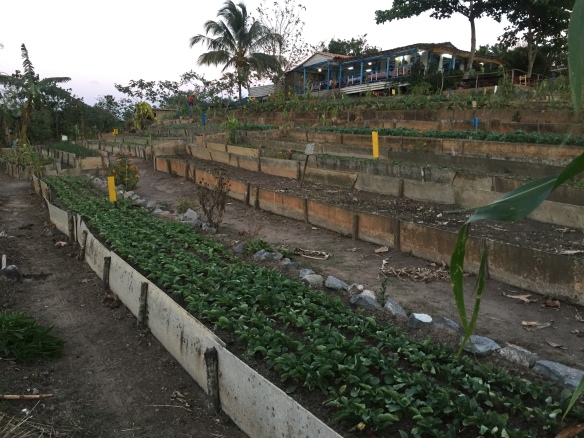 Pineapple!! Finally saw one growing in the wild! They are just so cool!

A recipe for a special relaxation cocktail made of herbs from the organic farm – it was delicious!