Sunday 6th February 2005
Hello hello!
Well I’ve only been here for a day and a half, but I already have so much to say I thought I’d spilt it up!! (plus Penny’s having a ‘seeing hands’ blind massage so I have an hour to kill).

We had a long journey yesterday, we flew from Seoul to Ho Chi Minh City, and then transferred to Siem Reap, where we had to queue for an hour to get our visas. Then we pottered outside (at about 6pm), and discovered its gloriously hot (about 35 degrees c), and found Chet, our driver who had come to collect us and take us to the guesthouse. The car park was full of vans, taxis, cars and minibuses, and Chet looked very apologetic and explained ours was a bit small, and then disappeared. A few minutes later, a bunch of coaches drove past, followed by Chet in a little tuc-tuc! (thats a moped with a funky little cart attached!). We thought it was fantastic, and way better than a van, so off we went! 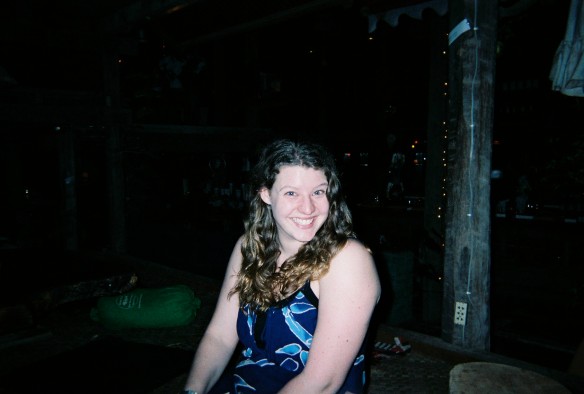 The guesthouse is lovely – air con, laundry service, and they organised us a driver and a tour guide for today’s trip to the Angkor Wat temples. We left at 8am, tootled up in our tuc-tuc (it’s my new favourite mode of transport!), and we were there. The temples are enormous and spread out over a huge area. Our guide (who’s name I can’t pronounce and won’t even attempt to spell) was really good, very informative and told us all kinds of history behind the temples, the kings, gods and legends behind all the carvings etc. The temples are an odd mixture of Buddhist and Hindu gods, all jumbled together, and are incredibly beautiful! (We took over four rolls of film in about 4 hours!).

The entrance to Ankhor Wat temples

The best part was that when we first arrived at the south gate into Angkor Thom (it means ‘big city’), we had to get off and walk through the gate, and then usually your driver can meet you on the other side to drive you up to the temples inside. Alternatively, for $10, you can take an elephant!! So, not surprisingly, we climbed up onto a 45 year old big elephant called Griam (which means grass, and is a very auspicious name), and strolled up to the temple of Bayom in style!!! We also saw some monkeys on the way, and lots of cool jungly-type stuff! There were tons of market stalls all around the temples, so we bought lots of cool junk like bamboo cow bells etc. 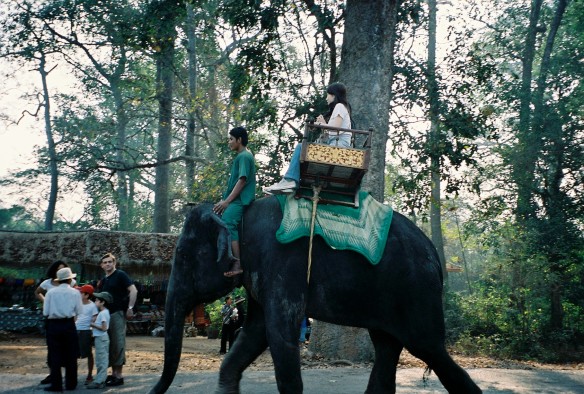 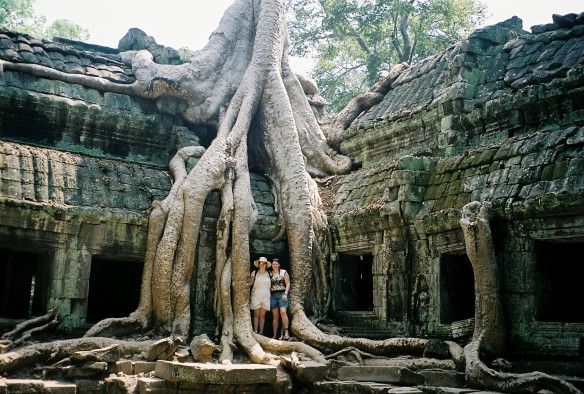 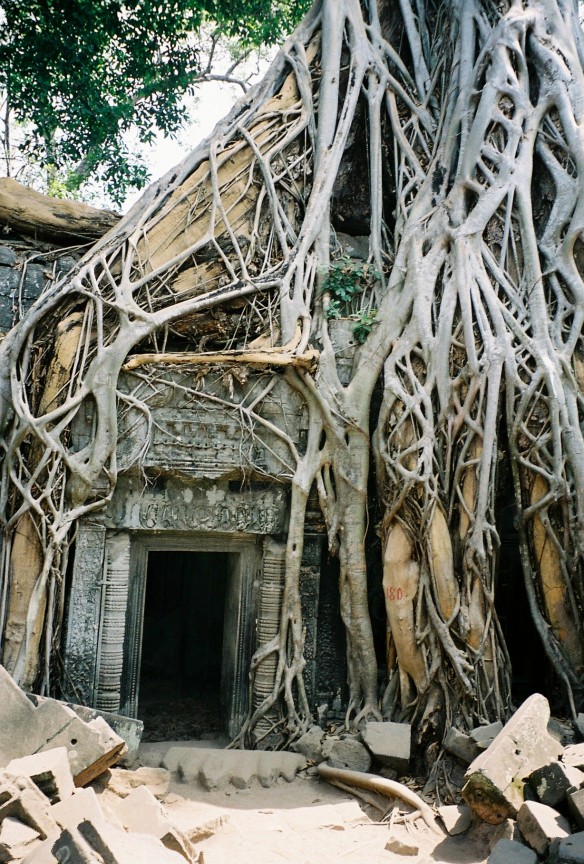 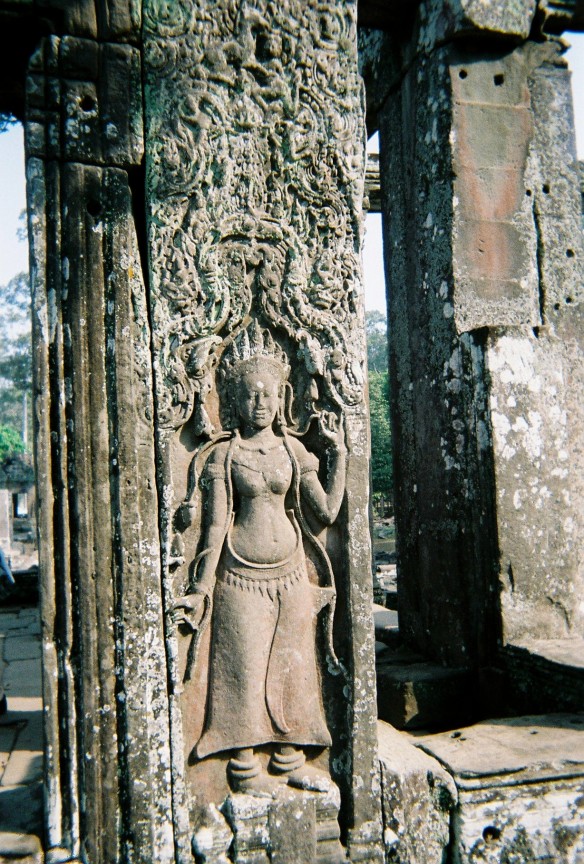 After an exhausting 7 and a half hours of walking and admiring, we went back to the hotel briefly to drop off our shopping and then headed into town to the markets. We shopped and bought loads of amazing stuff, then went back for a shower and a change. As soon as we were done, it was time to head back out, as the guesthouse had organised a dinner excursion to see some traditional Cambodian Aspara dancing. It was a huge outdoor restaurant, with an amazing buffet spread, and the dances and costumes were incredible.
A lot of the temple carvings had pictures of Aspara dancers, so our guide had already told us all about the symbolism of the hand movements, which are all based in Buddhist beliefs about the lotus flower and the natural cycle – he even showed us the hand shapes for old flower, leaf, tree, branch, bud, opening flower, and many more I can’t remember.
Anyway, dinner is over, Penny’s getting massaged by a blind man, and I thought I’d fill you all in! We’re getting up at 5am tomorrow to get a speedboat down to Pnomh Penh, and we’ve got a day and a half there, and then on Wednesday we fly to Saigon! So, so far so good, I adore Cambodia, and may just never leave!! Hope you’re all well, and I’d just like to say
I RODE ON AN ELEPHANT, NYAH NYAH NYAH NYAH NYAH NYAH!!!
Hee hee!!!
lots of love
excitable elephant-riding Maya