Monday 13th August 2007
Namaste
It’s now day 5 and after the first two days of relative dryness, the monsoon has made it’s appearance. It’s rained at least twice a day for the last three days, and it’s incredible to watch it sweeping over the mountains dumping down rain as it comes (I managed to get one reasonably good shot of this).

Monsoon rains dumping down on the hillside

So, doing my laundry has been impossible. as aside from standing in the rain to do it, it’s not going to get dry hanging on the line!
We wandered around a bit, in the local area of Kalanki and also in to Thamel, tourist district central. Thamel is an experience I could never attempt to describe, as it is a full sensory overload – the sights, sounds and smells, even the taste of the air make it an incredible experience. Even the difference between Kathmandu in the daytime and at night is amazing – both are very busy, and yet somehow completely different. 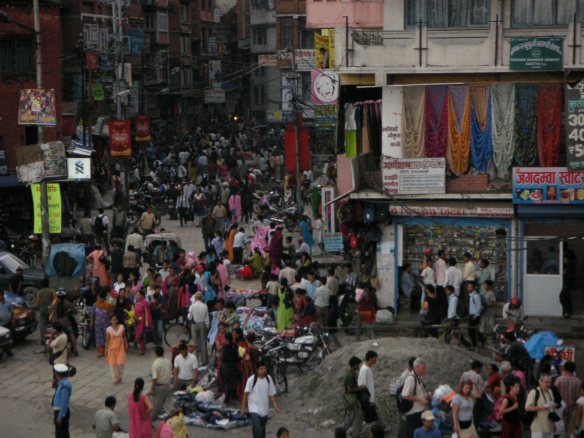 I was dead chuffed to see my first monkey two days ago, just sitting on a wall being fed fruit by the locals – it was quite big and aggressive, but very cool!

I have been struggling my way through our intensive language course, we’ve had three days, and then today was a break to do a full city tour of the major temples. Tomorrow we go back to lessons.
I was really excited about getting out and about in Kathmandu, but sadly I woke up at 3am instead, puking my guts up and having what I shall politely call a severe bout of Delhi Belly!
I was up and down all night with either my stomach or my bowel, and come the morning realised there was no way I could go on the tour. I tried to shower and wash my hair, thinking I might feel better, but ended up being very suddenly sick again and feeling jolly glad I was in the shower when it happened!
Anyhoo, the boys went happily off and I went back to bed. I tried drinking the oral rehydration salts I carefully stockpiled for just such an emergency, but found them so disgusting I couldn’t keep it down!
Even water has been a struggle, although I’ve managed to keep down about half a bottle so far today which I’m very pleased with! The lovely cook came down at lunchtime with a huge fruit platter for me (apple, mango, pomegranate and bananas, all chopped up for poor invalid me!) – I felt really quite spoilt, and while I wasn’t convinced that fruit is the way to go with an upset stomach, the cook was quite adamant I must eat it, and I figured if anyone would know how to cure this, it’s probably these guys!
So spent most of today dozing and feeling rubbish, but I woke up feeling better around 4pm, and realised I’d better get up and about or I won’t sleep tonight!
I feel much better now, and the mango in particular was delicious!
I’ve been racking my brains as to what has struck me down – I’ve been super-careful about water, eaten the exact same thing every day as the boys, but somehow have been caught out!
Overall it’s probably best to get it now, as our hostel is considered pretty luxurious compared to where we are going, with it’s running water and flushing loos. It could of course be that evil Cholera vaccine, the second dose of which I had to drink on Friday, but it could also be the water the vegetables are washed in or something.
Anyhoo, better sign off now and go learn my verbs – we have a test on Wednesday!
Nameste
love sick-as-a-dog-Maya