For the first time in 7 months, I recently felt genuinely afraid of going out in the street.
There was shouting and screaming, and loud explosions, people covering their heads and running for shelter.

Both Karla and I ventured out and ended up running for a taxi, and refused to get out until he drove us right up to the door of the hotel.
We made it from there to this internet cafe, but sadly not unscathed.

The reason the streets are so unsafe right now?
It’s not riots over Tibet (although there have been a few), nor is it election-related violence (although we’re prepared if there should be any).
No, it’s Holi festival, and for the last week the celebrations have been increasingly difficult to cope with.

Holi is a festival of water and colour, to mark the warmer weather and the end (hopefully) of the dry season, bringing the first of the monsoon rains and spring.
So it’s is celebrated (apparently) mostly by kids chucking water bombs off the roof of their houses at you.

The water is filthy, often full of mud and coloured tikka powder, which stains your clothes. Today both Karla and I got hit with dirty muddy water, and someone even threw milk at us! How disgusting.
We’ve also been informed that some boys will urinate into the bags for added fun, before throwing them (I should point out that they only throw water at the girls too).

So, having just paid 50 rupees to take a shower yesterday, my clean hair is now dripping wet with a mixture of milk, mud, possibly urine and filthy water.
Sometimes life just isn’t fair.

We’ve been warned not to go anywhere on Friday, as we’ll get utterly soaked, but we’ve also been invited to celebrate this festival at RCDP, (our volunteer coordinators) so we’re both going to wear old clothes and take our chances.

In other news, Karla and I decided to ride our wave of good karma as long as possible, and had lots of business type meetings with various local companies and have now persuaded lots of people to photocopy our flyers for free, to save us some money for the fundraiser.
We have also gotten all the new enrollment forms for school and have booked them in to take placement exams in two weeks to see which classes they should be in.
On Sunday we are going to the markets with Aamaa to buy all the material to make up the uniforms, and so all our preparations for school are well under way!

Sadly my wave of good fortune and karma ended rather abruptly, as these things always tend to do!
Aside from all the drama in Tibet and my now cancelled trip to Everest/Lhasa, on Tuesday I was struck down with the most violent stomach bug of my life. I literally had to run to the toilet almost every hour all night, and couldn’t sleep as my entire digestive tract was cramped in agony.
By about 6am I felt so weak and shaky even stumbling to the bathroom was difficult, and I knew I’d lost loads of fluid but even drinking water made my stomach cramp in agony again.
I thought I might have gotten dysentery or something, (probably from all the filthy water and urine being flung at my head!) but eventually the medicine kicked in and I slept for a bit.

Lovely Aamaa came to see me and ordered me to mix up my rehydration salts (nasty things – urgh!) and sent one of the kids down to the shop for some little cartons of mango juice.
She also said she’d make me jowlo (it’s a rice-porridge made with rice and dhaal – essentially what we eat every day, but somehow it tastes totally different!). I actually love jowlo, but couldn’t stomach anything at all.
Later on I looked up the health section in my lonely planet, which has been my health bible since I got here, and was shocked to discover that all of my symptoms were much more like bloody Giardia again! I ruled out dysentery, but suspect that my resident parasite is playing games with me, so I decided if he’s going to be such a major part of my life he should have a name.

Which he now does.
He’s called George.

George the Giardia parasite caused my 24 hours of agony, although I am now able to eat and drink again (just about!). Also I was relieved to know that the treatment for dysentery is the same for Giardia anyway, so even if I did have dysentery you have to take the same medicine. However George appears to be developing an immunity to my medicine so I’ll have to be a bit more sneaky about evicting him in future!
Let’s see, after that little come-down from the wave of good karma I’ve been consistently splattered with muddy water, milk and probably urine every time I leave the house, my briefly clean hair is filthy again, and I’m sure there’s much nastier bugs in the water they lob at my head on a regular basis. Plus the plastic water balloons really hurt when hurled at high speed!

Also my lovely Hot German has just announced he’s had enough of the drama at his orphanage (they accused him of trying to kidnap the children, even though he was actually trying to rescue them!) and is going off to meditate for a week or so before he buggers off travelling. He apparently needs “some time to himself just now” but would like to try and see me before he leaves.
So we may manage a 5th date, but it looks like that’s it.

Also, Priya informed me that the people who sponsor our rice and dhaal are having a board meeting soon and it’s not clear whether they’ll continue to provide food for us or not.
So although I’ve just raised enough money to pay for school, we may no longer be able to buy rice and dhaal, which puts us all back at square one and, frankly, sucks.
A lot.

However, it may not happen and if they do decide to stop providing food, Karla and I are now fully armed with my recently completed financial statement and a list of INGO’s in Kathmandu, so we’ll just have to go door to door to UNICEF, Save the Children, World Food Program and anywhere else until someone agrees to help us.
We shall see what develops. and I shall of course keep you all posted!

Anyway, I’m feeling much better now, and shall of course keep you all updated as the situation progresses.
I really, sincerely, hope that you are all enjoying yourselves back home and are not at this moment being pelted with urine.

ps – I actually wrote this email a couple of days ago but didn’t send it.
It’s now Saturday and Holi is finished (thank god!) but we ended up having loads of fun at RCDP. It started at 9am and was essentially a massive water-fight up on the roof, but with coloured tikka-powder that you try and rub into each others faces at the same time – extremely messy!

I got some awesome pictures, during the calmer moments when it was safe to bring out my camera!
It was all really fun, although the Nepali guys there broke out the Roksi (local home-brew rice-wine stuff) fairly early, and while most of the volunteers didn’t have more than a token small cup, the guys all got really hammered. It was all fine until a couple of them started getting a bit too touchy-feely and several of us girls felt decidedly uncomfortable. I think the high spirits, alcohol and white girls in soaking wet clothes was all a bit too much for them!

However at that point Karla and I decided to leave and had the perfect excuse, as we wanted to celebrate the festival with our kids at the orphanage too. 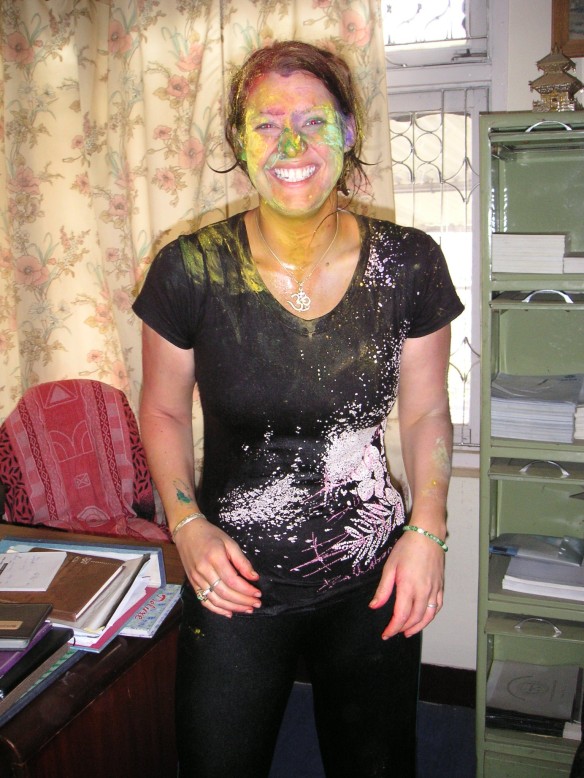 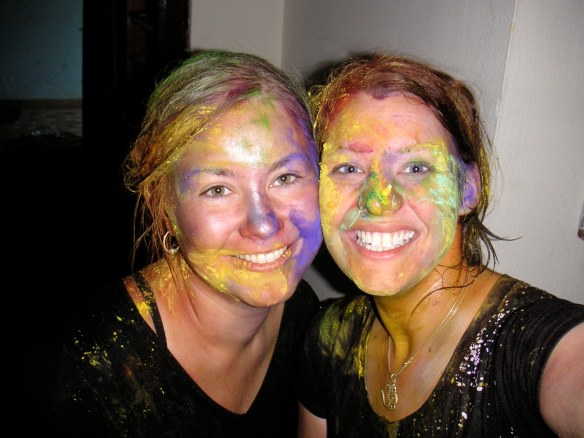 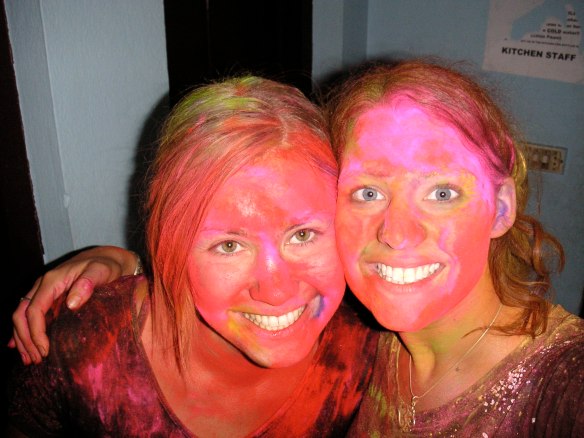 We came home in a cab, and on the way noticed that the streets were devoid of traffic and large groups of very drunk young men were roaming around lobbing water and wearing tikka on their faces like war-paint. Apparently Holi is the festival where everybody gets really drunk, but I noticed there were very few women around, and both Karla and I quietly locked our doors! The high spirits were all very well, but you could see that when you put a large group of men, lots of alcohol, and a big old water fight together the potential for it to turn nasty was fairly obvious. We actually drove past one that clearly had gone wrong – hordes of guys yelling and shouting, and they’d progressed from throwing water-bombs to rocks, and someone was already lying unconscious in the road as the police approached.

Anyhow, we made it safely home, and figured we’d have to just rinse off outside as best as we could, when Aamaa announced that we had hot running water! It was a little miracle!

We both got to have proper hot showers, and spent the rest of the day feeling clean and lazing about with the kids.
Priya informed us that the tikka powder is actually lead-based and quite poisonous, so we were a little concerned about how much we had ingested, but I think you’d have to swallow an awful lot to get sick, and in any case, it might shake George up a bit!

All afternoon Karla and I felt incredibly lazy and hungry – we kept having to eat snacks, and got the giggles for hours – at one point we had serious hysterics because we were trying to play cards and suddenly found that we couldn’t pick up the cards, because our hands weren’t working properly any more! Would have been really quite scary if we hadn’t been finding it all so hysterically funny! Priya then informed us that we must have had “Bhang” – a kind of liquid marijuana often imbibed at these festivals – we thought we had drunk Roksi, but Priya said it was most likely laced with Bhang!

So apparently we had had our drinks spiked and accidentally gotten really stoned! Very lucky for us we were safe and sound back at the orphanage really…
So, we’re all recovered now, although we both have rogue yellow and red patches of skin where we couldn’t quite wash off all the tikka!