Well, Karla and I have been busy busy busy organising things like crazy.
It’s really a lot of fun for me having some really specific goals to achieve and work to do, as I’ve mentioned before.

We’ve literally been ‘networking’ every day and have met so many people through other people recently. A lovely Californian guy called Jim who runs a Tibetan art gallery here came to visit us, and although I doubt he will be able to help us financially, was extremely helpful in introducing us to people. Almost every conversation we have goes like this:

” Do you know Shyam? He’s quite high-up over at Thai airways – he has helped out some charities in the past – I’ll introduce you sometime”
“Oh you must know Sudesh? The owner of the New Orleans? He helps out that orphanage over at Boudha.”
“This guy Rob Tamang, he owns the Bamboo club, he’s supporting a couple of children’s homes out by Bhaktapur”

We’ve been meeting with a lot of local businessmen, including (thanks to Jim) Sudesh, the owner of the New Orleans, a popular restaurant/bar in Thamel. Naturally most of our meetings happen in the evening, and involve a certain amount of wine to be consumed, which makes it all more fun! (although I’ve been spending an obscene amount of money lately eating out all the time, but I think it’s for a good cause. If only I was being paid for this and could write it off as a business expense!)

In this case, Sudesh, the owner, wasn’t really able to help us out much, as his bar mostly does concerts and music-type stuff, but is a useful contact and has already put us in touch with some other people who can help us. Also he introduced us to Anil Shahi, who plays guitar with a band there every Sunday. He’s a bit of a mini-celebrity here – EVERYBODY has heard of him! He’s a lovely guy and is also keen to help – he comes to England almost every year to do a few concerts etc, and has raised money for kids in charity concerts in the past, so we may ask him to help us – or maybe next time he comes to England he could do a concert for our orphanage etc.

I’ve also been to the screening of a documentary about a music and art education project with street kids, and met a couple of handicrafts traders there who’d like to meet up again to discuss the orphanage further.
Most of the people we’ve met are already involved in a project of some sort, which means they’re not really able to help us out, but I’m getting lots more ideas and advice from them.
Karla and I also visited a drop-in centre for street kids, and a music school funded by the UNDP (UN Development Program), which has a hostel and provides free accommodation and food for around 25 blind people, who are also entitled to free music lessons.
They learn how to play keyboards, drums (mostly tabla), a kind of accordion/harpsichord thing, and have vocal lessons too.
After 5 years (I think) they are qualified as teachers and can look for employment.

It’s an amazing initiative that helps these people, who would otherwise be unlikely to find a job.
The girl who showed us around said they sometimes have concerts to raise money etc, and I immediately thought of Sudesh, the owner of the New Orleans. He’s really into music and really the only way he could help us was to have a fundraiser there, but we’re already having it somewhere else as we needed a bigger venue.
However he would totally LOVE the idea of a concert with blind musicians (that just SCREAMS fundraiser anyway) and would say yes in a heartbeat.

However, I’ve got enough on my plate just now with my kiddies, so will put that one on the back-burner until our own fundraiser is finished.
However it would be fun to organise it if I have time in May, as it would be soooo easy to do and I’d really like to help them out, as it was such a great project.
(By the way, I REALLY hope I can find someone to hire me when I get back to the UK as I am LOVING this, and could sooooo do it for a living. If only someone would pay me to do it! Anyone with any job suggestions please let me know, as I don’t much fancy unemployment when I get home!)

So, it’s all been very exciting, and we’re now moving fast on a number of different things – we went to the market to buy all the materials for the school uniforms, and the tailor came round to measure all the kids, as he’s only got 3 weeks to make 50 shirts, 9 skirts and 16 pairs of trousers! The guy from the shoe shop is also coming out this week to measure all the kids’ feet – it saves us taking all the kids to the shops! Apparently he’ll just come and take measurements and then deliver the shoes!
Also our new beds arrived this week that the kind Australian guys bought for us, so we’ve been literally re-arranging the house to make room for them! 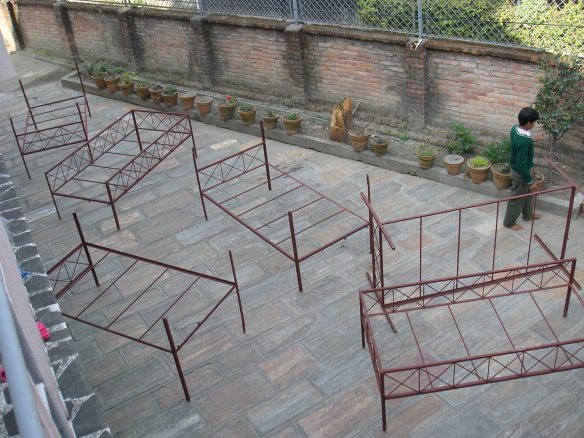 All ready to go!

Unfortunately there’s been a hold-up with the money we raised, and it still hasn’t gotten to us yet, so Karla, Amy and I have been paying for everything out of our own pockets, but once the money finally arrives we can reimburse ourselves. I’ve been chasing up the organisation, as I don’t know what the actual problem is, but hopefully it will arrive soon.

So, lots of excitement, and in the midst of this flurry of activity I completely forgot about Easter!
To rectify the situation Karla, Amy and I went to the shop and bought a load of little chocolate footballs (we couldn’t find any eggs!) which we hid all over the house for the kids to find. I don’t think they’d ever had an easter-egg hunt before, and they really loved it. Later on as a special Easter-treat I made them all peanut-butter sandwiches for tiffin (their lunch-snack), so it was a really fun day.

My little booklet is now finished and we have ordered 50 copies to hand out to all the NGO’s here etc, and I’m actually very proud of my handiwork!
I’ve attached a copy of it to this email for any of you who want to have a look at it, or who know anybody else who’d be interested please feel free to pass it on!

The profiles of the kids had to be split into 4 parts because of the file size of the pictures, so rather than send you all 4 more emails with attachments, anyone who would like to recieve those please email me back and I’ll send them to you seperately.
We have also almost finished the first of our monthly newsletters, which I will shortly be sending out. I’d like to start sending those from our “official” email address, rather than from this email, so anyone who’d like to receive regular updates about the kids and the orphanage after I’ve gone please let me know and I’ll add you to our mailing list. (I don’t want to email all of you from there in case you’re not interested or think it’s SPAM etc).

So, that’s about it for March!

We now have 11 days to go until the big election, so shops are starting to shut down here, as people are not allowed to vote unless they are in their home constituency, which is often two or three day’s journey from here. I may well be offline from next week if everything shuts down, and the next email will probably be after it’s all over (and I can tell you who won!).
Hopefully there won’t be too many riots or problems afterwards, although I suspect that will be unavoidable (in which case I’ll stay quietly locked in our orphanage with a supply of chocolate until it’s all over!). Our only major concern right now is that the aftermath of the elections may carry on for more than a week, which would affect our fundraiser, but we’ll just have to wait and see.

ps – for those of you who have been asking about my hot German I’m afraid there’s not much to report at the moment.

He’s still off meditating at Kopan monastery (if my Vipassana course was the meditation boot camp then Kopan is the Hilton option, with internet access and a coffee shop that does lattes!).
He didn’t tell me when he’s coming back from that, or when he’s leaving Nepal, except that it’ll be in ‘early April’. He said he doesn’t like to make plans as he prefers to be “spontaneous”, which sounded ever so romantic until I remembered that “spontaneous” is guy-talk for “I’m not going to call you for weeks, but when I do I’ll expect you to be immediately available” – and I’ve had plenty of those kind of relationships before!