Hi Everyone,
My deepest apologies for not writing much over the last 5 months or so.

I think the last time I wrote it was about July and I was manically writing my masters dissertation. I’d have written sooner, but I’m afraid my life in the last 4 or 5 months has been unbelievably dull and so there really hasn’t been much to report!

Let’s see, I finished my thesis in August, and am proud to announce that I somehow wangled a distinction, and I graduated in December, so I am now, officially, Maya, Master of Science (Brief pause for applause and adoration….) 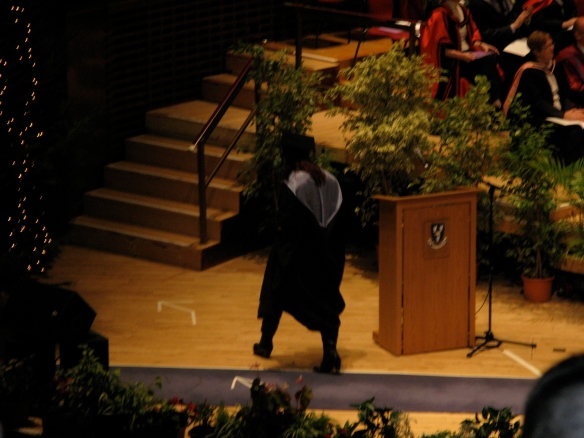 However, that being said, I am also proud to announce that I finally have a new job! I am now the new Corporate Social Responsibility Manager (International) for xxx University, in India. What’s that you ask? Well, mostly it’s a big fancy buzzword, but it means I’ll be trying to make the University look good by running community outreach projects and ensuring that they treat their cleaning staff well etc. It’s a brand new University, just outside Delhi, and they want to set themselves apart from other universities by being uber-environmentally conscious, recycling all their paper and helping grannies across the street (metaphorically speaking). I’ll be leaving sometime in January (probably in a couple of weeks), once I have a work visa, and so once I jet off again I promise the exciting and thrilling emails will start up again!
Also, anyone who fancies a holiday in India this year would be more than welcome to look me up.

Well, I suppose to recap on 2009, I guess the predominant thing this year (apart from my masters course) would be the epic failure I call my love life! I have made concerted efforts this year to be proactive, and have asked several guys out, or at least for their phone numbers, but have been uniformly unsuccessful.
No different than any other year for me really, except that as I slide closer and closer to 30, and my single friends disappear like there’s no tomorrow, one starts to notice such things!

Some statistics for you to illustrate my point:

In 2009, 4 of my friends have gotten engaged, 2 have gotten married, 1 had her 1st wedding anniversary, 3 have set their wedding dates, 1 has gotten pregnant and 2 of my friends have had babies.
I secretly suspect that everyone panics about these things once the big 3-0 starts to loom on the horizon, which may be why I have three weddings to attend next year!
(As I write this another friend has just texted me in a frenzy of excitement to tell me that she and her fiancee have just set the date for their wedding, so add that to the list – that makes four this year now!).

To add insult to injury, a friend of mine has just yesterday brought to my attention an article by the British Medical Journal (BMJ), an extremely well-respected scientific research journal, which discusses the “never-married effect”. Apparently, people who are married live significantly longer than people who aren’t, and people who have never married have the shortest life-span of all. (Seriously, if you think I’m kidding, here’s the link: http://jech.bmj.com/content/60/9/760.abstract ).
So in addition to being single, I’m also going to die younger! I really had better get on and start collecting cats, or I may not even have time to become a cat-lady!

However, the start of a new year is as good a time as any to look forward and hope for the best, and on that basis I shall be looking forward to the exciting challenge of my new job, and I have also heard that Johnny Depp is currently in India filming “Shantaram” so in my spare time I’ll be hunting him down and persuading him to marry me immediately!!

And, to finish on a happy note, I have had a wonderful Christmas at my sister’s new house, and was spoiled rotten and loaded down with pressies! I am the proud owner of a lovely new camera, several books, games and dvds, some gorgeous new pajamas and cds, and a plethora of chocolate!
We had a fantastic time, complete with a murder mystery dinner on Christmas Eve, and I ate an enormous amount of delicious roast dinners! (Here’s a photo of me as “Marie Mignon” at the murder mystery dinner – looking a bit shiny!). 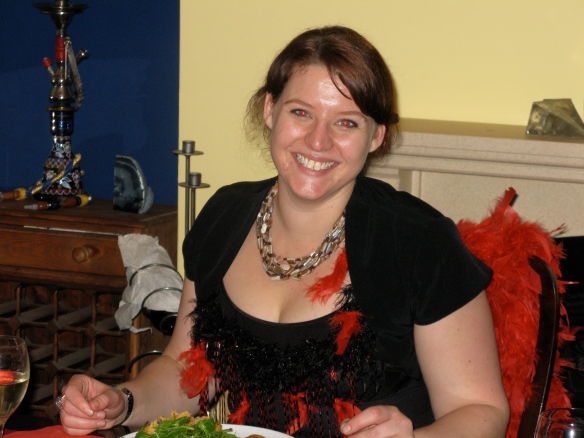 I also had an incredible New Year’s Eve, one of the best I’ve ever had, in Colchester with some old friends from school. We saw a really great live band, drank a lot, ran around in the snow, (which was tipping it down all night!), and generally had a lot of fun! (I’ve included a photo of me and the girls all dressed up for a night on the town!). 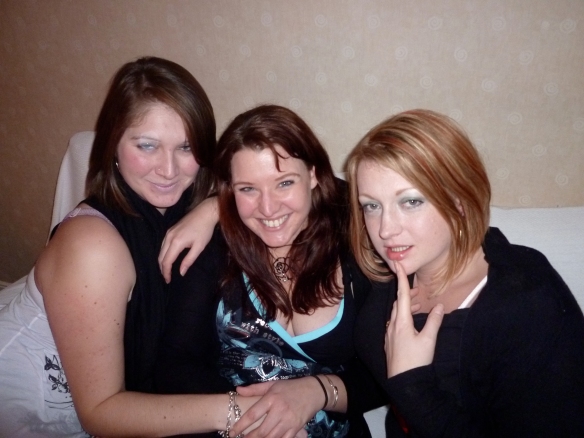 I do hope that my email finds you all happy and well, and that you all had a wonderful Christmas and New Year too!

My fondest and best wishes to all of you for 2010 – may it bring you joy, happiness and Johnny Depp on a stick!