While conducting our initial livelihoods assessment in Daan Bantayan municipality (in Northern Cebu), I met this lovely couple, Amelito and Mary-Ann Bantilan, who live in PayPay Barangay (PayPay village). I was really struck by their story, and by their incredible resilience and optimism in the face of such a catastrophe, so I thought I would share it with you.

Amelito is 42 and a fisherman who lives in PayPay village. He has a small paddle boat and a net, both of which were damaged in the storm, though he is still able to use them to fish (his boat has a small hole in it, so he can’t go out too far). His net has some holes in but is still just about usable. He normally fishes in the morning and evening, and catches around 4kgs of fish per day. He keeps back a small amount of fish to feed his family  (he has a wife, Mary-Ann, and 7 children, 3 boys and 4 girls) and sells the rest of his catch.

His wife usually sells the fish on their street, going door to door selling fish to their neighbours and small local shops (called Sira Sira shops) that are run out of people’s houses.

Amelito told us that the local fish farms were badly damaged after the typhoon, so the day after the storm, he and his children were able to wade into the water with his net and catch about 40kgs of milkfish – 10 times his usual haul!

The fishermen who run the fish farm were less lucky, as they lost all of their stock.

Amelito took the extra fish he caught to the local school, which was being used as an evacuation centre and they cooked meals for everyone there. There’s a word for that kind of thing in Tagalog, called Bayanihaan – it means community helping each other.

Amelito and Mary Ann lost their house in the typhoon – a large tree fell on it and the whole house was destroyed. All that is left is the concrete foundations. 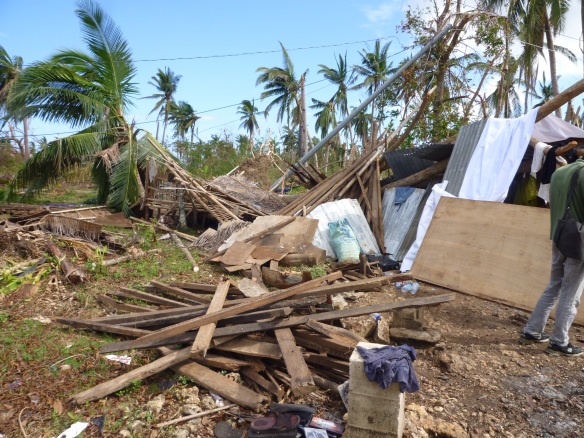 The remains of Amelito and Mary-Ann’s house

These 4 posts used to hold up the bedroom, which was made of wood.

They have propped some debris over the fallen tree to make a temporary shelter.

Temporary shelter under the tree that destroyed their house

Inside the “tree house”

The power lines also came down, so there is no electricity in the village now, and there is a fallen power line/telegraph pole balanced precariously over their makeshift shelter, which could also come down on top of them in another storm or high winds. Mary-Ann (40) told us the power company came out, but only to check the meter and inform them how much money they owe for their electricity. They have to pay their bill by 6th December or else face a large fine, even though there is no electricity in the village at all now. 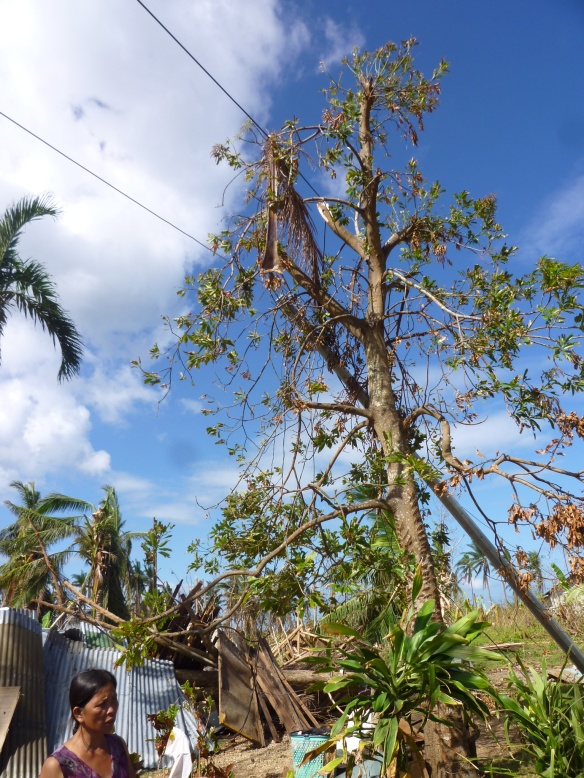 The power line balanced precariously on a tree over their temporary shelter.

Mary-Ann received 2,000 pesos in an NGO cash distribution, which they are using to help re-build their home. They have rented a chainsaw for 1500 pesos to cut up some fallen coconut trees, which they will use as the poles/supporting pillars to support the roof of their house, and spent 500 pesos on nails. She also received a hygiene kit with blankets, mats to sleep on, bedsheets, sarongs, mosquito nets, underwear (for men, women, boys and girls), laundry soap, sanitary napkins, bath soap, toothpaste, and toothbrushes, which were very useful to them after they lost everything.

Mary-Ann Bantilan, in front of her makeshift shelter under the tree that fell on her house.

Both Mary-Ann and Amelito were incredibly smiley, optimistic and upbeat, and really grateful for the help they received to re-build their homes.

It’s truly incredible to see people who have lost everything, still smiling, and ready to start over and rebuild. It’s something I’ve seen over and over again in the Philippines – the deeply-ingrained resilience of the people here. You see signs everywhere at the side of the road, or spray-painted on walls “Bangon Bantayan” – it means “Rise up Bantayan”, and lots of posters saying “We will rise up again”. It’s such a powerful sense of community spirit and strength, it makes me feel both proud and in awe of these truly incredible and inspirational people.