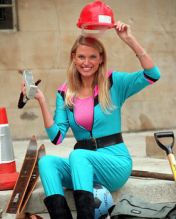 *Disclaimer – Any resemblance to real persons, living or dead, is purely coincidental, and any similarities between this post and actual aid work should not be taken seriously.

Hi folks, it’s me, Anneka Rice here. I’ve been dragged out of retirement to help support the emergency response after a massive super-typhoon (Haiyan/Yolanda) cut a swathe of destruction through the middle of the Philippines. Maya asked me to help out by writing about our adventures on her blog, as she’s been a bit too busy to jot it all down. 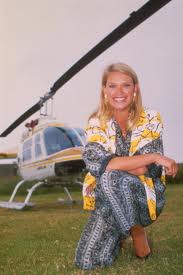 Most of you will remember me fondly from my “Challenge Anneka” days back in the 90’s. If you don’t, feel free to look me up on the interweb. I’m the one wearing the sexy neon jumpsuits and hanging out of helicopters.

Now then, Maya’s been in the province of Leyte, in a city called Tacloban, which was totally destroyed by the typhoon and subsequent storm surge (the waves were over 10 metres high! Can you imagine?). So let me set the scene for you.

Rice is one of the major staple crops here in Leyte, and in November most farmers had either just harvested, or were about to harvest their crops when the storm hit, wiping out almost all of their harvest, including their seeds. The next planting season is in December, towards the end of the rainy season, and it is crucial that the farmers are able to plant the next crop – as 2 failed harvests in a row means there could be a massive rice shortage in the coming year across the Philippines, not to mention the fact that those poor farmers won’t be able to sell anything or make any money for several months. Tragic!

So, Maya, along with her organisation, have decided to give out rice seeds to approximately 10,000 rice farmers in order to help them plant their crops before the rains come to an end.

So here we are, in the thick of it! It feels just like the good old days of Challenge! I dusted off my favourite pink and blue jumpsuit and headed for Tacloban. Maya told me the rice had to be planted by December 15th so the pressure’s on! Only 10 days to distribute 10,000 sacks of rice seed!

(I did point out to Maya that it would make for much better television if we could try and do it all in 3 days, but she didn’t look too keen on the idea. Plus technically my film crew aren’t actually here, but still, it’s the drama of a ticking clock that draws a crowd, and gets the adrenaline pumping!)

Some incredible footage of Tacloban a few days after the typhoon, and then 6 weeks later.

Really shows you the unbelievable clean-up efforts going on in this town, and even the markets springing up again!

See? What did I say?

Ok, shutting up about markets now….

Some photos from my work in Leyte Province, in Tacloban, Tanauan, Palo, Dulag, Julita, Mayorga and MacArthur. Flying out on the UNHAS plane (United Nations Humanitarian Air Services) LOTS of felled coconut trees, as viewed from the air coming in … Continue reading →

On a more serious note, my first weeks in Tacloban and around Leyte (in Palo and Tanauan), have been an incredibly intense experience.

It’s literally mind-blowing, to look around and see such complete and total destruction, when you think about how it happened. I mean, I can understand an earthquake. The ground shakes, and things fall down – makes sense to me.

But wind is just air, moving really fast. And I know it has force, and pressure, especially when moving at 300 kph, but it’s still just air. How can something with no substance at all topple brick walls, and reduce massive stadiums to rubble? How can wind leave so many enormous steel girders in twisted heaps amongst all the wreckage? It quite literally blows my mind, the sheer power and force of it all. People here have told me the noise was monumental – one woman told me it sounded like an airplane engine inside their house. END_OF_DOCUMENT_TOKEN_TO_BE_REPLACED

Ok, so I was trying very hard to draft some posts in vaguely chronological order, but haven’t had time to post anything much at all, and so much keeps happening every day that it’s hard to keep track, so my apologies if everything seems a bit haphazard and all out of order…

Thought I’d just give you a little taster of life over here. It feels like I’ve been here for months, mainly because when you’re working 18-hour days, so much happens between 6am and 10pm that it feels like 2 or 3 days have gone by! When I first arrived in Tacloban on a Wednesday morning, I went to a meeting with the Department of Agriculture in the morning, and then the next three days were so busy and hectic, that by the time I met with someone on Friday, I was convinced the DA meeting had been a week ago!

It’s also incredibly damp here – very humid and sticky, still raining a lot, so lots of mosquitos and pretty bad smells. The hotel we’re staying in, which also houses our office, was not too badly damaged by the typhoon, although the swimming pool was filled with manky green sludgy floodwater that appears to be breeding mosquitos and frogs at a frightening pace. It’s been mostly drained and cleaned out, but still has a sludgy greenish puddle at the bottom. END_OF_DOCUMENT_TOKEN_TO_BE_REPLACED

As I have struggled to write coherent blog posts in any semblance of order, and so much is happening it’s all starting to sound a bit disjointed and confusing. Have just looked back through some facebook posts and realised it’s easier to be funny in short random posts.

So, here is a taster of my first few weeks in the Philippines, as seen through my facebook status updates:

Another long, hectic, but fascinating day… Off to bed now, but getting up again in 4 1/2 hours to go to a distribution… My current checklist of things not to forget at 3.30am includes “Big truck, little truck, van full of cardboard boxes…”   🙂

END_OF_DOCUMENT_TOKEN_TO_BE_REPLACED

Wow, there’s so much to say! I’ve actually been here now for about 6 or 7 weeks, but am only just finding the time to write stuff down….

My first few days in Cebu were a bit crazy, working really long hours, and getting up so early every day – my first night in Cebu after I got off the plane I had to get up at 4am to travel straight out to the north to Daan Bantayan to do some livelihoods assessments, and then I only came back to Cebu for 2 nights before I headed back up there for a hygiene kit distribution and more market assessments.

I was getting up so early the first few days (well, in the middle of the night really), that it took me about a week before I noticed that my hotel room didn’t have any windows!

One Wednesday night (20th November) I had worked a really long day, and my colleague P and I only just climbed into bed knackered at 11.45pm, knowing that I had to get up again at 3.15am to go and load the trucks ready to leave for the distribution. We had just turned out the light, and I was so tired, I felt the bed vibrating slightly. I thought it was rather relaxing, until P’s voice from the other bed said

“Erm, by the way Maya, you do realise that’s an earthquake right?”.

END_OF_DOCUMENT_TOKEN_TO_BE_REPLACED

Some pics of my second trip up to Daan Bantayan, distributing hygiene & water kits to the community there 21st-22nd November 2013 Some early bird beneficiaries… Showing them what’s in the hygiene kits… Lovely Jenny, our first beneficiary, gets her … Continue reading →

My first assessment trip up to Daan Bantayan in Northern Cebu, 18th & 19th November, 10 days after Typhoon Yolanda/Haiyan. Quick Market assessment – plenty of food available for sale in the markets And a lovely sunset over the sea…. … Continue reading →

While conducting our initial livelihoods assessment in Daan Bantayan municipality (in Northern Cebu), I met this lovely couple, Amelito and Mary-Ann Bantilan, who live in PayPay Barangay (PayPay village). I was really struck by their story, and by their incredible resilience and optimism in the face of such a catastrophe, so I thought I would share it with you.

Amelito is 42 and a fisherman who lives in PayPay village. He has a small paddle boat and a net, both of which were damaged in the storm, though he is still able to use them to fish (his boat has a small hole in it, so he can’t go out too far). His net has some holes in but is still just about usable. He normally fishes in the morning and evening, and catches around 4kgs of fish per day. He keeps back a small amount of fish to feed his family  (he has a wife, Mary-Ann, and 7 children, 3 boys and 4 girls) and sells the rest of his catch.

His wife usually sells the fish on their street, going door to door selling fish to their neighbours and small local shops (called Sira Sira shops) that are run out of people’s houses. END_OF_DOCUMENT_TOKEN_TO_BE_REPLACED