On a more serious note, my first weeks in Tacloban and around Leyte (in Palo and Tanauan), have been an incredibly intense experience.

It’s literally mind-blowing, to look around and see such complete and total destruction, when you think about how it happened. I mean, I can understand an earthquake. The ground shakes, and things fall down – makes sense to me.

But wind is just air, moving really fast. And I know it has force, and pressure, especially when moving at 300 kph, but it’s still just air. How can something with no substance at all topple brick walls, and reduce massive stadiums to rubble? How can wind leave so many enormous steel girders in twisted heaps amongst all the wreckage? It quite literally blows my mind, the sheer power and force of it all. People here have told me the noise was monumental – one woman told me it sounded like an airplane engine inside their house.

There are so many sad stories here too. Like the cultural centre in Tacloban, a large round building by the port, definitely one of the sturdiest buildings in the city, and one of the biggest evacuation centres. Hundreds of people were evacuated to the cultural centre by the authorities during the storm, as everyone believed it was the safest place to be. And if it had only been a typhoon, it would have been. But unfortunately no-one was expecting the storm surge – waves of sea water, 10-15 metres high, battering the city and pouring into houses. Hundreds of people drowned inside the evacuation centre that day, as the water poured in through the windows and filled up the halls, reaching all the way to the ceiling.

Other people have commented that the terminology and language used may have led to unnecessary deaths. Technically, the waves were classified as a storm surge and not a tsunami, and those of you who are weather buffs will know what the difference is. Sadly, your average Joe does not have such an advanced knowledge of geography, and so most people did not fully understand what was coming. If they had announced a tsunami warning over the radio, people might have fled to higher ground, or been evacuated further away from the shoreline, or have chosen not to hide from what they thought was a regular typhoon in storm cellars and basements, where they would be trapped and helpless when the water started pouring in.

One thing that struck me, driving around in a wasteland of felled trees, upside down cars and lorries, and debris piled up as far as the eye can see, is the little things that you notice in amongst it all. For example, there is one house in Tanauan Municipality that has been blown by the wind so hard the entire house has tilted at a 45-degree angle, so that although it’s still standing, it’s leaning at a crazy angle, with no roof left, and one whole wall has collapsed entirely, leaving the contents of the house exposed to the world. There’s barely anything left in there, except for the rubble and debris, wood, bricks and corrugated iron, and yet there is a wardrobe, still intact, but with it’s doors blown off, and inside, somehow untouched, is a pile of folded pink towels. I find it astonishing that in a house leaning at such a crazy angle, with no roof or walls, that something so random has survived, seemingly untouched (although most likely they are pretty sodden from all the rain…).

Another incredibly sad and moving moment was during my first week here. My organisation was doing some cash for work activities in Tacloban, Palo and Tanauan in the immediate aftermath. Cash for work is a very useful activity in an emergency like this, as it allows NGOs to give people an immediate income, so they can support themselves and their needs (similar to giving cash, as I explained in a previous post while high up on my soapbox…), but serves a dual purpose of getting other work done at the same time. So for example, everyone has just lost their jobs and livelihoods, and there’s debris everywhere, blocking roads and access routes, and stopping pretty much everything from functioning. So, you pay people a standard agreed wage (usually the Government-set daily minimum wage for labour) to clear the debris – teams of work crews get paid to help clear the roads and clean up the streets, allowing them to buy food and support their families, while simultaneously providing a valuable public service and injecting some much-needed cash into the local economy.

The speed at which the clean-up happened in Tacloban was astonishing – people were saying even after 3 or 4 days it already looked like a different city, but I was humbled by one of my colleagues in a team meeting, 2 or 3 days after I arrived. I had been in Daan Bantayan and Cebu when I first arrived in the Philippines, and came out to Tacloban on the 4th Dec, nearly a month after the typhoon hit. We were sitting around on the floor having our team meeting (it was before we had managed to procure any furniture for the office), each reporting on the day’s work.  Benny, who’s leading one of the cash for work programmes in the barangays close to the port, in the most heavily damaged area of Tacloban, was running through how many zones they had cleared, and how many people they had reached, and what the work plan was for the coming week. The he casually said “Oh yeah, we found some more bodies today too, including a baby. But we asked the police to take the bodies away and then we carried on.”

It was such a horrific thought, that they had found the body of a baby, which had been hidden under the rubble and debris for a month, and I was really quite shaken by it. After the meeting, I pulled Benny outside for a chat, to make sure that he was ok, and let him know I was here if he needed to talk about it. Benny told me that the morning of 10th November, two days after Yolanda, he was due to get on a plane to come to Tacloban from Manila, when his mother-in-law died. He was incredibly close to her, and was her carer for 3 years, she was like his own mother, but he didn’t get to go to her funeral to say goodbye. She died at 5am, and he got on a plane at 10am. He was devastated by his loss, but then he stepped off the plane and looked around Tacloban and realised the magnitude of what had happened. Bodies piled high everywhere you looked, and soon he stopped seeing them as people at all, but just work that needed to be done. He said that finding that child had made him stop and think about his grandsons for a moment, and how much he missed them, but then he pulled himself together, clapped his hands together and got on with the job, because that’s all you can do now. He is such an incredibly strong and inspirational person, always ready to look forward and get the job done, despite massive challenges – I am literally in awe of him and what he is able to cope with.

One day when we were driving out to a field location further south, another colleague J turned to me and said “Did you see that Maya? That coffin? That’s really a very good sign. It means people are able to bury their dead properly again. That’s very important.” And it’s true – The Philippines is a strongly Christian country, largely Catholic, (but not exclusively), and funerals and death rituals are an important part of the grieving process, as they are for us all, whatever culture you are from. I visited some mass graves in Tanauan, while assessing some distribution locations, and was informed that they would all have to be dug up again later, to allow people to bury them properly. Mass graves can be helpful to reduce the psychological trauma of seeing bodies lying around (it’s a complete myth that dead bodies are a public health risk – only in very specific circumstances would corpses pose a threat to public health), but it can be equally damaging to bury people in mass graves when they haven’t been identified – it leaves people wondering for weeks and months whether their loved ones are alive or dead, and makes it very hard to start dealing with your grief. 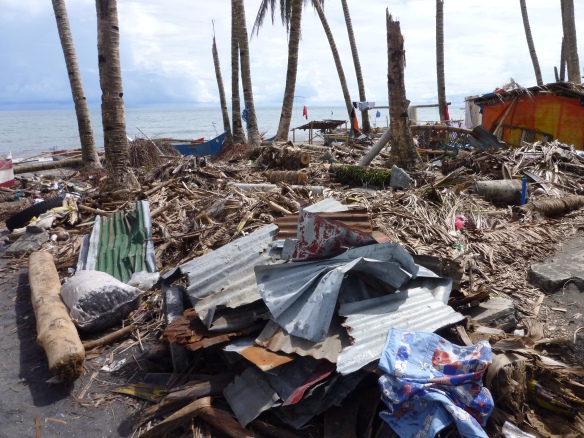 Anyhow, that’s enough misery for now – as there are plenty of more uplifting things to write about!

I’ve mentioned before the incredible spirit and positivity of the people here, and how blown away I am by their upbeat mentality – reinforced everywhere you go by signs and t-shirts saying “Tindog Tacloban” – Rise up Tacloban. Being here is like watching a city rise up from the ashes.

The first week I was here, the markets were barely functioning, and you could only buy the most basic of items, like apples and soap in the market. But even after 3 weeks, the change is tangible – already the markets are bustling as people recover whatever stock they can from their wrecked shops and start trading again out on the street, selling t-shirts and mobile phones, and all sorts of useful things. I know, I know, I’m yammering on about markets again, but seriously, it’s so indicative of people’s ability to pick themselves up, dust themselves off, and carry on. There’s a nice article by a Time Magazine reporter who I actually met in Daan Bantayan about the resilience of markets – called “Business as usual, without the roof” which articulates some of it better than I can.

Ah well, that’s enough from me for now I think. More to come soon no doubt….