This year, partly for environmental reasons, but also mainly because of my reduced salary while on maternity leave, I am trying to do a mostly homemade Christmas (with a few small exceptions).

In order to do a good homemade Christmas you need to plan ahead and not leave it to the last minute – there’s never any time in December! But also I’ve got more time on my hands than I used to at the moment so with that in mind I have been busy making all sorts of things!

Christmas Decorations – these were actually test-tiles I made to test out some new glazes and glaze combinations in my pottery classes last term, so some of them are not the prettiest colours, but they make nice little decorations and it’s better than throwing them in the bin after I tested the glazes!

Limoncello – a firm favourite of mine and one of the easiest to make! 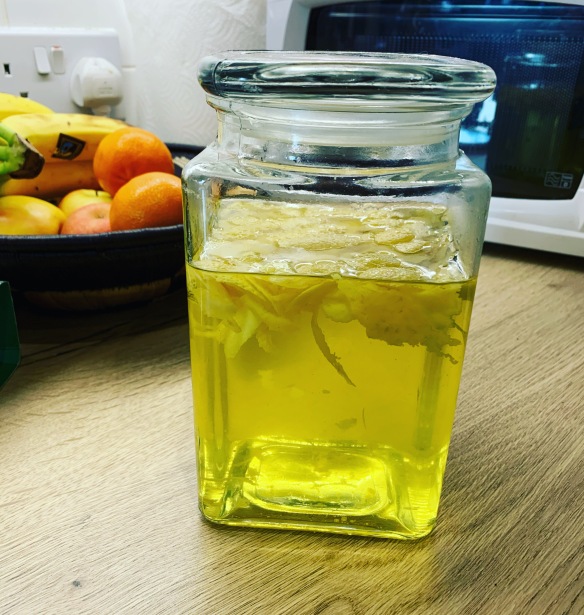 The recipe? A bottle of vodka, the zest of around 5 or 6 lemons (I use a peeler instead of a grater so they are slightly larger strips but try to avoid getting the pith). Leave to soak for a week, then make some sugar syrup by dissolving sugar in hot water (the recipe I use suggests 300g sugar to 300ml water, however I recommend adding it slowly to taste – last year I made it far too sugary by accident!).

You can leave it with the sugar for another week, but it doesn’t make much difference to the flavour, and over time the colour goes less neon-yellow and slightly darker, urine-yellow, which is less attractive to look at!

Rhubarb and Ginger Gin – this is a new one I am trying out, so no idea how it will go!

Get the pinkest rhubarb you can find, and chop it up into 2-3 inch chunks.

Add sugar (I can’t remember how much – google it!) and leave the rhubarb and sugar for 24 hours to start drawing the juice out. Then add the gin and sliced ginger (i just guessed at how much, and added some more later on) and leave in a dark cupboard for a few weeks.

I think 4 weeks is the max, as after that the rhubarb starts to disintegrate, and over time I am told the colour goes less vibrant and more faded pink. We will see how this one turns out!

(Also top tip – don’t wait til October to make this like I did, as it turns out rhubarb is in season in June and it’s hard to find! Next year I will be more prepared!).

Plum Brandy – I was originally planning to make Apricot Brandy, but again, turns out apricots are not in season in Autumn, so I went with plums instead.

Halve the plums and remove the stones, keep 4 stones, crack them with a hammer and wrap them in some gauze/cheesecloth to add to the mix. Add 1 cinnamon stick and some sugar (not much is needed for this one – maybe 100g-150g?). Leave in a dark place covered for around 4-6 weeks. After 6 weeks remove the package with the stones but you can leave the fruit for longer if you want to.

I assume you could make an extremely boozy crumble or dessert with the plums afterwards!

This one smells amazing and very Christmassy because of the cinnamon… 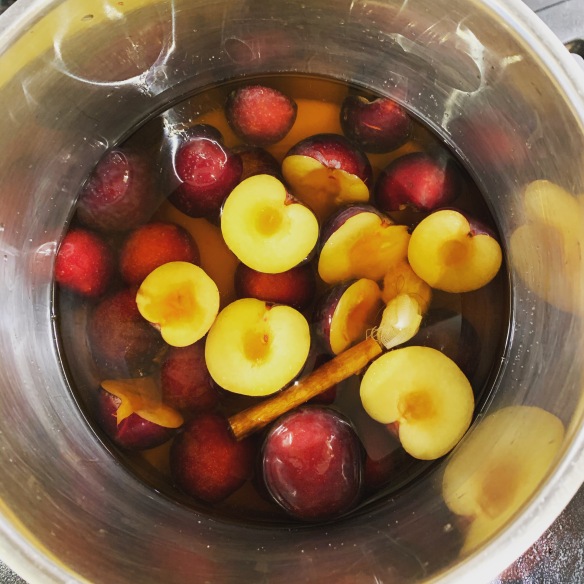 Sweet Chilli Jam and Chutney – haven’t got a picture of the chutney. The sweet chilli jam is a great easy recipe from BBC GoodFood and is lovely with spring rolls or cheeses. Spicy but not too spicy!

I usually make a caramelised red onion chutney, but this year’s effort was inspired by my mum’s chutney, and had red onions, cooking apples, tomatoes and raisins as well as vinegar and sugar and some various spices – no idea how it will taste, so might have to open one before Christmas and check it’s ok!

With all of these things, I wash the bottles and jars thoroughly and then sterilise them in the oven before sealing so they will keep for around 6 months or so.