Wednesday 26th October 2005
Ok, so I’ve had a weird couple of weeks, prepare for a slightly frustrated onslaught!!
I’ve had my fabulous haircut – pictures attached, fear not, and me and the girls went out on the town in Seoul to celebrate!
I’ll admit I was looking exceptionally ravishing, so that may explain the number of men that kept hitting on us, but sadly most of them were far too young or completely weird!
There were an awful lot of young American military lads out and about, and don’t get me wrong, I’ve met tons of lovely, intelligent Americans, but all the guys that came over to our table were under twenty and seemed to think that “WOOHOO!!! BEER!!!” was a good pick-up line.
That and they were so excited about the beer they kept spilling it down my back (although thank god they missed my lovely hair!
Another guy came over, asked me my name, and then deliberately dropped my lighter into my drink and asked me if I was gonna slap him! (I’m serious! He really did that!!). So of course I slapped him, and then told him to bugger off, but it didn’t have too much effect as he enjoyed getting slapped far too much!
Then another guy came over and asked if he could come home with me, and when I said no, not really, he said “Well fuck you then!” and stormed off!!
I’m seriously wondering if I’m not better off single, because frankly I’m finding the concept of dating  any of these idiots less and less appealing!!!
Sadly, things at work are not much better. Since Cal left almost two weeks ago, we’ve been down to three teachers, and the replacement has yet to show up, as he’s having visa trouble. I have literally been working my arse off teaching extra classes, and sometimes teaching two or three classes together,  and planning and organising all the games and activities for the upcoming Halloween party, while the Korean teachers have pretty much sat around watching me!
I’ve got extra evening classes and phone teaching to do, so I’m usually not done until about 9pm most nights, and all the other teachers go home at about 7, so recently I’ve had Olive, our receptionist, hovering over me while I’m phone teaching, tapping her watch and asking me to hurry up cos she wants to lock up and go home! I keep explaining to her that I’m not staying late by choice, unfortunately I have to do it, but it’s just not sinking in!
I finally blew my lid today in a staff meeting, because I have been left planning every last detail of our Halloween extravaganza and no one else is helping at all!!
James, whose only job was to be on charge of getting a movie for Friday’s movie day, when asked what the movie was going to be, said “Oh well, I don’t know yet, I have to look online and see if I can download something or else I’ll have to rent something, I don’t know yet – it’s a lot of work” – this from the man who’s had two weeks to find a stupid video!
Molly, our other Korean teacher, just sat there like a terribly nice and decorative sheep, she had nothing to add or say, no ideas or suggestions, and got pissed off when she found out the teachers are supposed to dress up as well.
I had allocated musical chairs to Molly, because I figured it was the easiest job involving no preparation, and she might just about manage it without supervision, but after explaining the concept of the game to her twice, and then drawing her a diagram, I was starting to wonder if she would cope!
In the end I blew off steam to Jenny about how generally hacked off I was about the whole thing and how no one else was working at all, and I really wanted a bit of back up. However, Jenny’s solution was to tell James and Molly that they have to stay at school until 9pm, so I’m no longer the last person in school, sitting in the dark, phone-teaching alone after Olive turns the lights off and sits waiting for me very impatiently!!
She neglected to give either James or Molly any actual jobs to do, so they’re just stuck in the office, surfing the net, twiddling their thumbs and resenting me while I teach!!!
Not such a great move I feel!
So, all in all, I’m feeling a bit frustrated and pissed off and very tired and overworked (and I am still waiting for my bonus that I should have received back in early October), and I cannot wait to get to Australia and have a break!!
I am well in need of a holiday, as I have become scarily anal these days, (I think its a hazard of the job!)
I am also suffering from a biblical case of acne, so my face has turned into a general plague area, and I have only included the pictures of my gorgeous haircut that are out of focus or really far away!! (and one of my hair before as well!)
hope you are all well and happy little chappies and all that jazz,
tons of love
anally-retentive Maya
xxxx 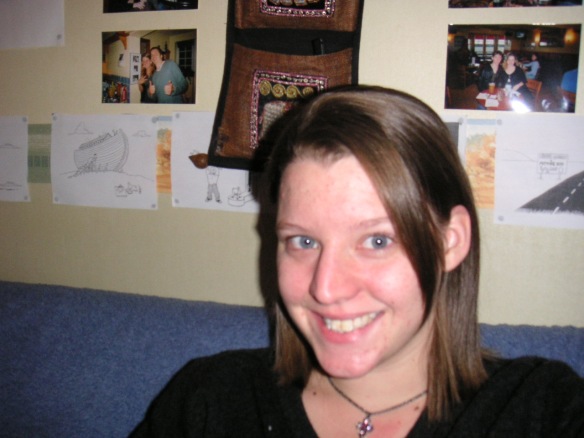