Ok, where did I leave off last time?

Well, I whizzed across from Haampi to Goa for a night, and then took a very long train journey north. It was around 36 hours to Agra, and like the good Brit that I am I was well prepared for the boredom with several books, a pack of cards, my ipod and various snacks etc.
After reading for several hours, I busted out the cards for a few games of patience, which drew fascinated looks from basically everyone in a 5-metre radius of me.
They stared and talked excitedly for about 30 mins before one young man was clearly voted the one to speak to me. He stood up reverentially and asked in a shaking voice if I was doing magic.

I wasn’t sure if he was referring to Harry Potter style magic, or the more basic card tricks, but when I explained that I was merely playing a game a murmur went up around the bunks and the young man looked more puzzled than ever. He then looked at me in awe and asked how I could possibly play a card game with just one person!!
All highly amusing!

They were so intrigued by the concept, and kept on staring in wonder at me, presumably hoping I would read their fortunes or something, so I eventually gave them the pack of cards to play with, and they spent the next few hours happily playing some sort of complex card game (except for one granny who looked on in disgust and clearly thought that all playing cards = gambling or something equally evil….)

Later as I fumbled around for my bags at 4am ready to de-board at Agra, I had a marginally uncomfortable moment when a train guard decided to stand over me and rub his crotch shamelessly several inches from my face.
Lovely.

Agra I must say was not at all wonderful. In fact, it’s a total shithole.
It stinks, literally all through the city, of urine and garbage and other delightful things, far more so than any other city I’ve been to yet in India. It was also the only place where I felt distinctly uncomfortable and I wanted to leave as soon as I’d arrived.
There were about 10 times as many touts and things there, and I literally had at least 6 or 7 men pressing up against me from the second I stepped off the train, and they were far more aggressive about trying to sell their taxi/rickshaw/guided tour etc.

I went off to the Taj Mahal, which despite the rather surprising level of crowds at 6am, was stunning. Totally worth putting up with Agra for, and extremely gorgeous and wonderful etc. Magnificent and other suitable words!

Then I got straight back on a train to Delhi, not wanting to spend another second in Agra, and spent my last couple of days in a very pleasant hotel just off the main bazaar where I did lots of shopping (shock! horror! Maya does more shopping!).I whizzed around the Red Fort in Delhi, and saw a few more bits and bobs. I also got ready to pack up my stuff, did some laundry and attempted to re-acclimatise myself for the UK by watching tv, and was subsequently astounded that someone could actually use the word “bikini-riffic” in a sentence.

I also accidentally had my hair dyed black – oops!

Then the long flight home, and I suddenly found myself at Heathrow, being hugged by my wonderful, but overly tearful mother, and discovered I am happier to be home than I ever have been before. After almost 11 months away from home, it was nice to be back!

It’s now been a very busy week since I arrived home, and I’ve been rushing around catching up with my friends and generally being happy and excited. I even had the chance to go and see Bon Jovi with a friend last Friday, who was utterly fantastic and I love him (the word “phwoar” would definitely be appropriate here). 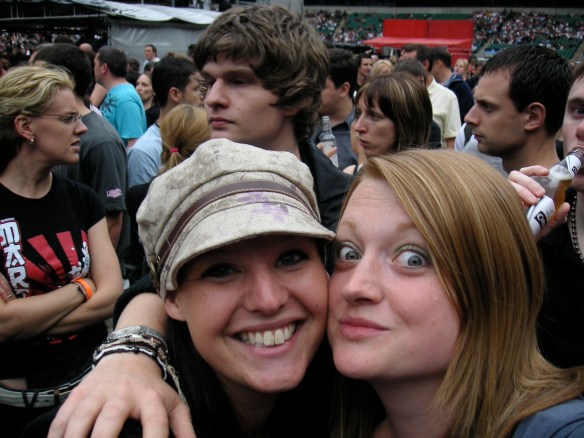 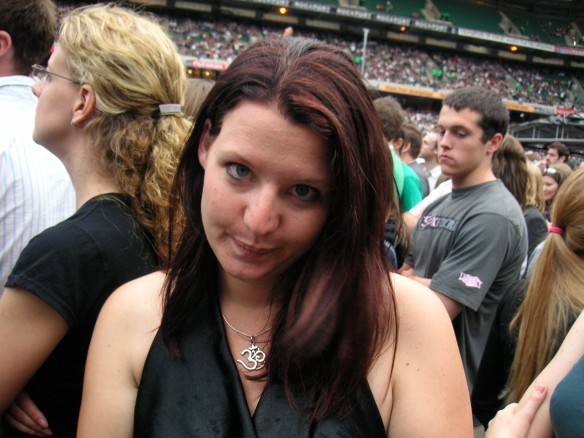 Not impressed with my black and red streaky hair! Although the guy behind me appears to be checking out my arse! 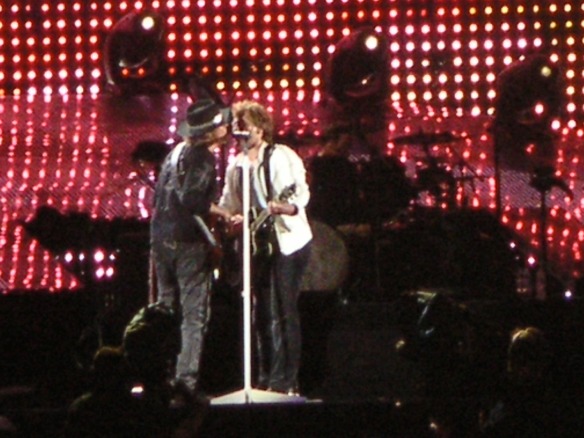 Yes Jon, you can still pull off leather trousers at your age *swoon 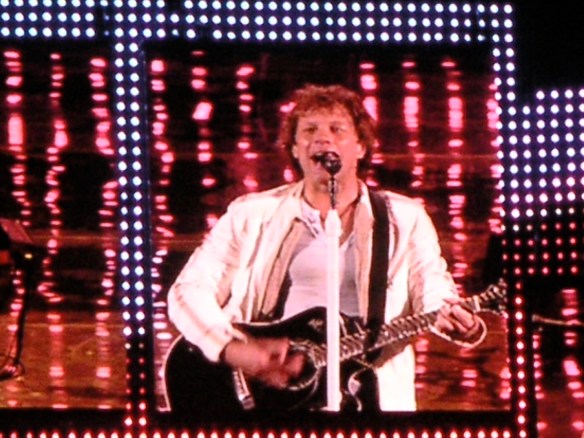 I also had a nice BBQ where I saw lots of friends and am now just about ready to settle down to a serious job-hunt. I’ve so far had one rejection, one interview, and one job which I discovered I wasn’t eligible to apply for after they asked me to outline in detail how the impact of God’s unconditional love had affected my life and the way I follow the message of Jesus Christ….

Aside from all of that, I am sooooo happy to be home, and this time around I’m planning to look for a job and hopefully stay in the UK for at least a couple of years. As I tootled up and down from London for my interview yesterday, I glanced out of my window and watched the countryside rolling by. It occurred to me, as it does almost every time I come home, how beautiful England is, and also how culture-shocked I still am here.
I found London a lot more busy and bustling and noisy than I remembered and the fields and flowers brighter and more vibrant.

It eventually dawned on me that having been away for so long, I’m seeing it all, even the most familiar landscapes and places, in a completely new way, and I am, in almost every sense, a tourist in my own country.
And so, for my next adventure, I greatly look forward to exploring this lovely little country in the months to come in all of it’s quaint glory!

love to you all,
Happy to be home Maya