We planned a fun day out in London visiting my cousin who has a new baby and also a FANTASTIC exhibition at the Tate Modern (Olafur Eliasson – it’s AMAZING, if you’re in London go see it now!).

It was our first ever train trip together, and I thought I had planned it well – on the 10am train to London, coming back at 2.50pm, on a weekday/normal working day, not school holidays etc. Figured it would be quieter and easier to travel with a small person.
Apparently not – both trains were packed! On the way in I had a seat booked but the reservations system didn’t seem to be working so there was someone in my seat and the train was chock-full, and there was no space for the buggy anyway so I decided to just keep the kid in the buggy and stand in the corridor.

So much for off-peak!

We had agreed to meet at the Tate Modern gallery 11.30am as we needed to have timed tickets to the exhibition, and I’d assumed that half an hour was plenty of time to get from Paddington to Southwark.
However I’ve never done it with a buggy before, and while on the train I started looking at journey planners, trying to work out step-free access and which stations had lifts etc. Suddenly a 15-20min tube ride was apparently going to take 57 minutes, as if you want step-free access you have to take a tube to here, a bus to there, another tube to here, etc. Quite the palaver. END_OF_DOCUMENT_TOKEN_TO_BE_REPLACED

In other news, work has been busy busy busy as I transition into my new role, and try to wrap up various projects in my current role.

Here’s a few little snippets of what else has been going on in the life of Maya in the last few months, via my facebook posts! END_OF_DOCUMENT_TOKEN_TO_BE_REPLACED

My dear friend recently won the ballot and got 2 tickets to Wimbledon, and she took me with her!

We had an amazing day, with seats on Court 1 for the Ladies’ Quarter finals. I do love tennis so very much – such an amazing sport. 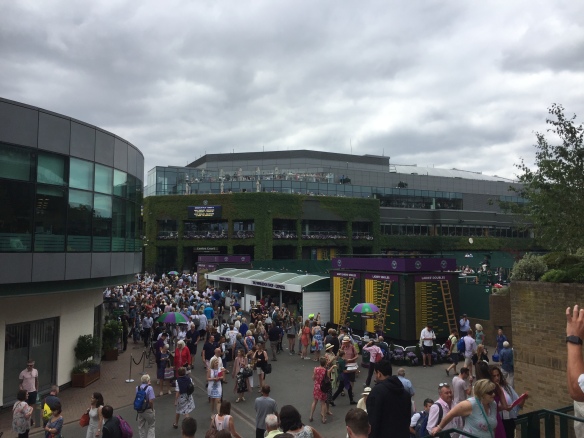 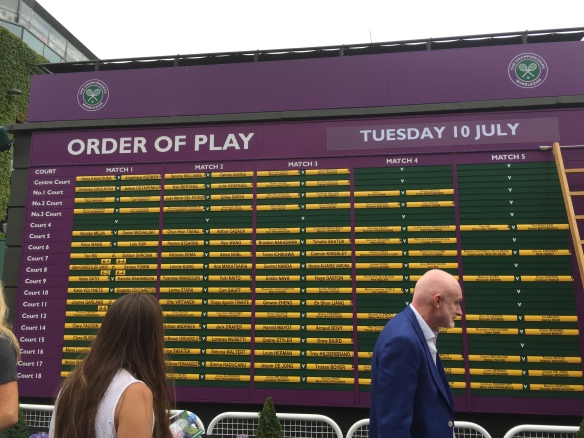 END_OF_DOCUMENT_TOKEN_TO_BE_REPLACED

Well well, it has been an exciting week!

So, some work-related context first: My manager C (now ex-manager) and I developed two water and sanitation e-learning courses on behalf of several NGOs in a consortium. It was a beasty piece of work that got bigger and bigger, and ended up taking us about 2 years to do.

However, we’re dead chuffed with the final products, which are available online here if you fancy taking a look (the courses are called Technical Project Management for WASH emergencies, and Information, Education, and Communication for WASH emergencies). We also managed to produce them onto CDs, and in French, and the feedback from staff out in the field has been fantastic. However, even better was the fact that we got shortlisted for an e-learning award! We presented our courses to the judges back in September, and were invited to the very swanky e-learning awards dinner to find out if we won. Our category was for ‘Excellence in content production – not for profit sector’, and there were 5 other organisations/companies who were shortlisted in our category. The ceremony itself is all very elegant and formal – black tie, including a champagne reception and a 4-course dinner at the Mariott hotel in London (Ooh-er Mrs!). The e-learning company who developed the courses with us very kindly paid for our tickets to this shin-dig, as well as putting C and I up in a hotel in London for the night. END_OF_DOCUMENT_TOKEN_TO_BE_REPLACED

Hello everyone!
Here is the first of my African blogs!

However, before I describe my first impressions of Africa, I’ll have to tell you what a drama I had getting there!
My flight was on Friday, at 9.35pm, and I was due to fly to Addis Ababa in Ethiopia and connect to Juba in South Sudan on Saturday morning.
Having gone through the usual tedious process of Heathrow security, I was reading my book, waiting for them to display the gate number, when a voice on the tannoy system announced “Could all passengers on the Ethiopian Airlines flight to Addis Ababa please go directly to the transit desk.”
Hmmmm, it didn’t sound good. END_OF_DOCUMENT_TOKEN_TO_BE_REPLACED

Ok, where did I leave off last time?

Well, I whizzed across from Haampi to Goa for a night, and then took a very long train journey north. It was around 36 hours to Agra, and like the good Brit that I am I was well prepared for the boredom with several books, a pack of cards, my ipod and various snacks etc.
After reading for several hours, I busted out the cards for a few games of patience, which drew fascinated looks from basically everyone in a 5-metre radius of me.
They stared and talked excitedly for about 30 mins before one young man was clearly voted the one to speak to me. He stood up reverentially and asked in a shaking voice if I was doing magic.

I wasn’t sure if he was referring to Harry Potter style magic, or the more basic card tricks, but when I explained that I was merely playing a game a murmur went up around the bunks and the young man looked more puzzled than ever. He then looked at me in awe and asked how I could possibly play a card game with just one person!!
All highly amusing! END_OF_DOCUMENT_TOKEN_TO_BE_REPLACED