Well, well, well, it’s been MONTHS since my last update!
You poor people! You must have been positively gasping for a nice long, chatty update on Maya’s life….
No?
Well, tough, cos that’s what you’re getting.

So, what’s new in the world of Maya?

Well, I’ve now been happily installed in my lovely house for over 6 months, and it’s starting to feel all comfortable and homey. I have made the obligatory sacrifice to the carpet gods and spilled the ceremonial red wine, so it is now offcially mine!
I have painted and decorated on a couple of walls, just because I can, and thanks to some expert advice from my mother have been able to populate my garden with some hibernating plants that will hopefully pop up and be lovely in spring and summer….

I have developed an incredibly boring fascination with specific aspects of DIY and home furnishing, which I thankfully keep mostly to myself and try not to share with others out loud very often. But I am slightly embarassed by how much I enjoy learning all of the different pros and cons of laminate flooring vs vinyl vs linoleum, and could happily spend entire weekends in flooring shops examining faux oak finishes. Such is the depth of my home-owning depravity…. But I hide it extremely well and can most of the time maintain the illusion of still being a reasonably interesting person, and I can always fall back on work-related tit-bits about the impending war in the Sudans if my mind starts wandering towards whether or not waterproof laminate flooring really does live up to the name….

I have also heeded the wise words of old wives everywhere and achieved a spider-free home! Hooray!!!
Sounds crazy, and perhaps it is, but it works, and therefore it is not my place to question the wisdom of the old wives….
As many of you may remember, when I first moved into my new abode, there were some frankly quite terrifyingly giant house spiders claiming squatter’s rights, and although I bravely graduated from hurling my spider-infested handbag into the street and stomping on it, to the far more mature “cup and piece of card” removal method, it was not an ideal situation. Also my learning curve was steep and rocky, as the first time I tried the cup technique, I very slowly inched towards the beast, slowly and thenveryquicklydroppedthecupoverit and then realised that I was going to need a much bigger cup, or possibly a bowl.

But these trials and tribulations of spider cohabitation were soon to be over!
Enter the old wives – who claim that fresh conkers, placed strategically around your house, will keep away big giant house spiders very effectively. Ask anyone about this method, and I guarantee at least 70% of people you ask will say “Oh I’ve heard that!” or “My gran used to do it”. The old wives apparently disagree on correct placement of said conkers – some say near windows and doors, while others claim the corners of rooms work best. In the interest of a swift eviction I decided to cover all bases and place conkers in all corners AND on windowsills and near doors.

And it bloody worked! It’s been over 4 months since the strategic conker deployment, and I have not seen a single giant house spider – only 1 tiny outdoor spider which was clearly lost, and I was able to re-direct him to the garden very easily.
A triumph of “someone’s gran” over science!
🙂

As many of you will already know, I had a lovely Christmas with my family, and got to hang out with all my lovely nephews, my brother and sister and all the in-laws, and my brand-new baby niece, who is almost 3 months old now, and incredibly cute and cuddly. There was a lot of eating, drinking and present-giving, which was all very jolly and Christmassy, really.

And so here we are in 2012, the year that the Mayans predict the world will end. Well actually they didn’t, they just ran out of space on their calendar, so decided 2,000 years was far enough into the future so they’d just stop there….

As I enter the new year, I have made the usual crap resolutions which I am already failing miserably at (eat healthier, exercise more, and so on) I have also decided it’s time to enter the rather terrifying world of internet dating…

I must say it’s all a bit daunting, even just filling in the endless questionairres about myself. Most of the questions are things you would expect, but there have been a few which are highly personal and frankly quite shocking. For example, I was surprised to be asked whether or not I believe that abortion is wrong, but then I suppose that is something you might want to know about your partner in advance should the situation ever arise. Similarly, I could see that knowing someone’s feelings on contraception in advance would probably be quite useful. However, when I was asked whether or not I would consider simulating rape during sex if my partner asked me to, I found myself really quite taken aback. At first I thought, “”There’s no way I’m even dignifying that with an answer! Eewwww.”

But then I realised it’s something I actually do feel quite strongly about, so it’s probably worth making sure potential boyfriend is on the same page early on!

However, aside from all the deeply personal information that people apparently share publicy on these sites, my favourite question was “Do you believe in dinosaurs?”. I mean, I can understand questions like “Are you a creationist” or “Do you believe in the theory of evolution?”, but it’s not like dinosaurs are the same as fairies! I think even the most hardcore creationists would concede that dinosaurs existed, just that God made them and then he smote them, or something to that effect….

Anyhoo, so far I have been on 2 dates, but no great joy yet. The first guy is a computer animator who has mostly stayed inside his house for the last three years, doesn’t like food or eating, hates people, socialising, and parties, and apparently had some sort of a breakdown last year. Probably not destined to be my soulmate…
The second guy was very nice, has a daughter with his ex, but they were together for 8 years, and only broke up very recently, and he spent most of the date explaining to me why he was still in love with her, and how she broke his heart etc. So possibly not a great match either….

However, I shall persevere (at least for a little while longer)….

And finally, in other news, my job continues to be challenging, interesting, sometimes frustrating, but overall very satisfying.
I continue to delve into the world of e-learning, and was recently in a meeting in which someone said “We’ll have to include a few extra pixels to allow for browser furniture” AND I KNEW WHAT THEY MEANT!
It shocked me too, although naturally my brain went immediately to an image of tiny tables and chairs, and I couldn’t help but wonder what type of flooring they might be on….

So, that’s my life so far – what about you? Send me your news! What have you all been up to? I want to hear all your trials and tribulations, and your thoughts and preferences on faux-oak vinyl finishes….And don’t forget to clap your hands if you believe in dinosaurs!
I have also attached as a lovely little gift for you all, a recently acquired recipe for homemade ice-cream which the most utterly delicious ice-cream you will probably ever eat. (Thanks to mum’s friends for the recipe!). It’s mega-easy to make – you don’t have to keep stirring it as it freezes or anything, just make it up, pop it in the freezer, and leave it to freeze!

p.s. Oh my god! Can’t believe I left out the most important news of all! I have a cat!!! She’s a beautiful 4-year old black fluffy cat called Cleo (short for Cleocatra of course – my sister helped me to name her. We toyed with several awesome names like Chairman Meow, and Pussolini, but settled on Cleo in the end!). She’s very soppy and sweet and cuddly, and is a genuine scaredy-cat most of the time. Photo attached for you to admire and adore. I am trying very hard to resist becoming a sad single cat-lady spinster, but it’s extremely tempting to just do it, and get a few more…. 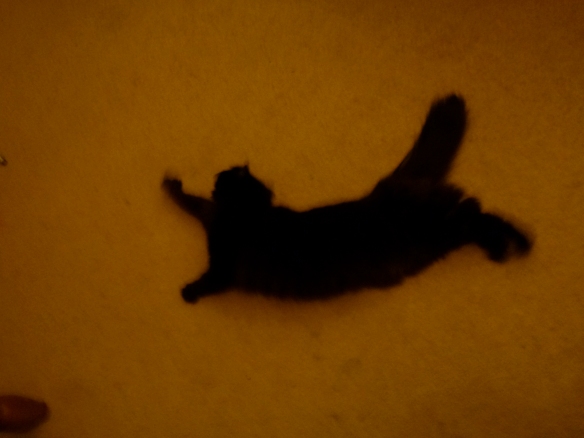 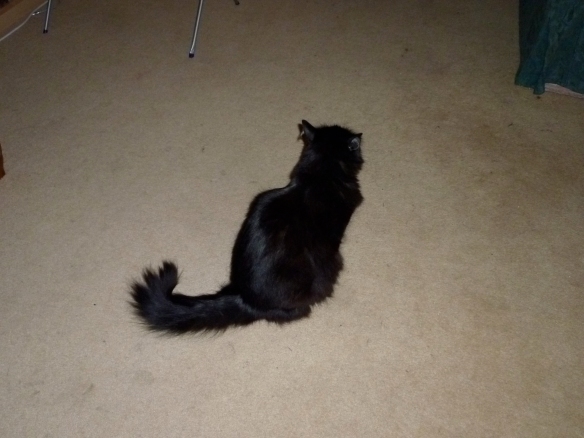 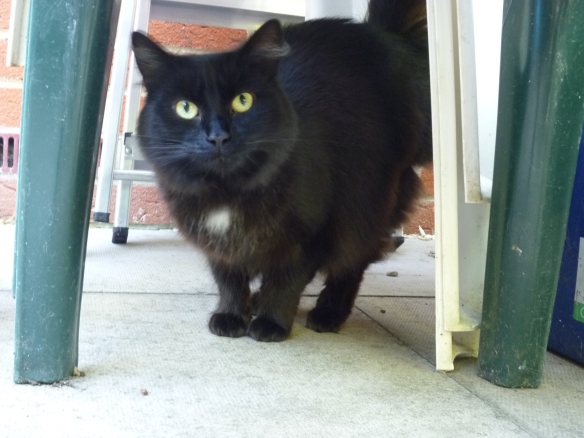