In honour of returning home (and due to the fact that my local swimming pool has now been shut down, meaning I have to hike all the way to Blackbird Leys now if I want to swim), I have finally taken the plunge and bought a bicycle!

Her name is Clarissa and she’s beautiful. She was 50% off in the student back-to-school sales, and she’s very ladylike – nice low bar, and a basket and everything! 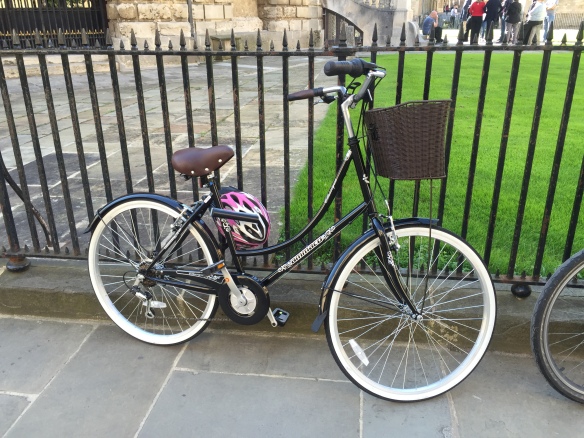 She will now be accompanying me as I wobble about on Oxford’s roads – drivers beware!

The general gist of the conversation was that yes, they did have a plain black helmet, but it was shite, and if I cared about the colour that much, maybe I shouldn’t bother with a helmet at all. If however I actually wanted to protect my skull during an accident, then the unimould one was the best quality, and it was half price, and I’d just have to accept the fact that it’s pink as they didn’t have any other colours in stock. So there we are.

I also purchased a bright yellow, fluorescent high-vis waistcoat/tabbard, which makes me about as visible to drivers as I could possibly be, but is hard to look even a little bit attractive in a tabbard. Fact.

So my sexy new bike is slightly let down by the un-sexy tabbard-wearing eejit riding her, but nevermind. 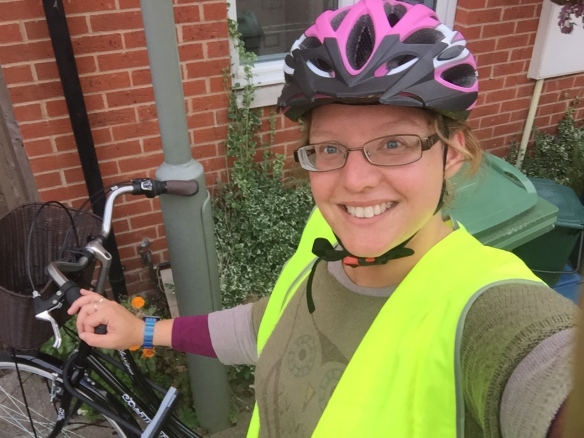 Some of my friends have commented that she’s so pretty and shiny and new that she’ll get stolen, so one friend actually suggested that I “rough her up a bit” – the very idea! As if I could do that to Clarissa!

Here’s a summary of my adventures in cycling so far:

Took her for her first proper full day out – trip from home to work, from work to the gym, and then gym to home. I also achieved my first bike fail. As I bumped over a road on the way back from the gym, something clattered to the ground, so I dropped my bike onto the grass and rushed back into the road to see what I had dropped. It turns out the reflector fell off my bike (and I can’t for the life of me see where it goes back on!). I picked up my bike and carried on home, only to realise when I got there that my D-lock had fallen out of my basket when I dropped it on the ground. Only had that lock for 24 hours before I lost it. Major #bikefail

Had thought that I could wear a long skirt on my bike, as it has such a low cross-bar.

Turns out the whole pedalling motion of knees going up and down slowly causes my skirt to rise up over my knees and beyond, so I wound up flashing my pants at a number of commuters on the roads this morning…. To make matters worse, I had to go to Homebase after work, and decided I didn’t want to show my pants to the many, many commuters at a standstill on the ring road at 5pm, so I changed into my gym tracksuit bottoms. Sadly I didn’t have my trainers with me, so had to walk around Homebase in trackie-bums and black high-heeled boots. Have literally never felt more ridiculous in my life.

The good news is I retraced my steps back to the gym and found my bike lock! It was still lying on the grass where I left it, so I converted my #bikefail into a #bikewin!