I’m now 4 months into my maternity leave, and although I love so much about bonding and cuddling and spending time with my kid, it’s also boring and lonely a lot of the time.

You’re in the house alone with a tiny person you can’t really talk to all day, so you go to the park and you’re alone there too, pushing your kid on the swings, nodding and smiling at the other random parents, prattling away to a kid who isn’t really listening. One of our toddler groups is really lovely as two of my friends go there so I really look forward to that one, but most of the other toddler groups are a bit cliquey. Most of the other mums on maternity leave already have friends from their NCT groups or similar, and those with toddlers tend to be stay at home mums or childminders who already know each other and have been going to these groups for ages so they’re less interested in making new friends.

You smile and make polite small talk, some days I’ll make an effort to make a new friend then I won’t see them again for 3 or 4 weeks. It’s tiring to constantly engage with complete strangers and strike up random conversations 3 or 4 times a week. And of course, there isn’t anyone else who is on maternity leave with a 2-year old. You’re either on maternity leave with a baby, or you are a stay at home mum or a childminder with a toddler. So it’s impossible to make small talk without having to have the adoption conversation. I’m very open and I don’t mind telling people I’m an adopter, but people are so curious and interested that they want to know EVERYTHING and sometimes I just don’t feel like telling complete strangers my entire life story, especially having to do it 3 times a week to different people at each toddler group we go to. I try to keep it vague sometimes but it never works – it always ends up with quizzical expressions and the confusion on people’s faces makes it really hard not to explain.

Aside from having to explain myself, and why I’m on maternity leave with a toddler, or why I’m a new mum without a new baby under 1, or that I’m a single mum adopting on my own, people are genuinely interested in adoption, which is nice, but usually leads to a TON of probing and intrusive questions! One woman recently at the hairdresser’s was asking the usual questions but she kept probing and wanted to know my kid’s full name, middle names, where she was from exactly, her heritage, her birthday, no what is the actual date, and eventually I had to say look, I’m really sorry but I’m just not comfortable sharing so much personal information about my daughter to a total stranger, even though I’m sure she thought she was just being friendly.

On a recent night out to the theatre, my friend was babysitting, and I hopped in a taxi. The driver was chatty and asked where I was going, what I was doing, did I do theatre things a lot etc. This led to “No I’m a new mum actually, so this is a real treat for me”, “She’s almost 2” “No she’s adopted, so I’m a new mum even though she’s nearly two”

He interjected at this point to say “Don’t take this the wrong way, but adoption is a really lazy way to have a kid isn’t it?”. I gritted my teeth and decided not to maim him while he was operating heavy machinery. He then asked about my husband, and I said no, actually I’m single, and thought Oh god why am I explaining myself to you? It’s so hard to just sit there and rudely ignore someone’s incredibly intrusive questions, and I honestly don’t know what else to say but the truth. The taxi driver asked if he should give my address to any nice guys he comes across to help me find a husband and I very nearly punched him before choking him on the data protection/GDPR rulebook….

A fellow single mum in one of my lovely support groups told me that she has found the perfect answer to annoying intrusive questions about where her husband is or why her kid’s father isn’t around, which I may just use myself sometimes. She replies with “Oh he’s dead.” And when they say “Oh I’m so sorry.” she replies with a smile “Oh no don’t worry, I was acquitted.”

That one will probably come in handy the next time a nosy taxi driver or hairdresser wants to know why I’m not married….

I’ve also had some quite interesting/funny/strange responses to the adoption conversation. The taxi driver’s was probably the most offensive, insinuating that my 18-month long process was somehow lazy. But other interesting responses to my “I’ve recently adopted her” conversation include:

“Oh good for you! That’s the most environmentally friendly way you could have a family. It’s so eco-friendly!” (Yeah cos THAT’s why I had a kid…)

“Oh poor thing! What happened to her? Are her parents dead?”

It’s surprising how many people still equate adoption with orphans even though I would guess around 95% of the children in care still have living parents. But no-one immediately assumes that the kid might have been taken away from their birth parents or thinks about why. And when they realise they want to know WHY she was taken away, what traumatic things might have happened to her in all it’s gory detail – It’s sheer curiosity but I don’t think people stop to think if it’s appropriate to ask me that, or to ask in front of my daughter! Or if it’s ok to ask me why I chose to have a kid on my own, (you’d be surprised how many people have asked me why I didn’t want to have kids the “normal” way with a partner, as if my life choices are any of their business).

So sometimes it’s hard work, and sometimes it can be lonely, even in a room full of people, and the only way to make it less lonely is to give a brief summary of our family history and defend my personal life choices to every stranger we meet, week after week, which gets boring and monotonous, and after a while you just cant’ be bothered so you sit in the corner at playgroups, drinking tea watching your kid play by yourself. Except on Thursdays when I can see two of my actual friends and we can talk about other stuff like normal friends do. I really have started looking forward to Thursdays…

Don’t get me wrong, I am still seeing plenty of my real friends on weekends and in the evenings now and again. A friend of mine who lives in London and works nearby has been staying a couple of nights a week once in a while and it’s been nice to have some adult company in the evenings. I recently organised a girl’s night in and invited a handful of colleagues over for wine and gossip after the little one was in bed, and it was so much fun (will definitely need to do that again soon!). I often catch up with friends and colleagues at weekends, and of course I’ve had a lovely trip away to see my mum and just last weekend went to visit my sister in Wales, as well as a couple of rare nights out recently. We had lots of visitors over half term, and things are getting busy and booked up in the run-up to Christmas, so I’m slowly getting my social life back on track again after the whirlwind and upheaval of the first couple of months.

I am conscious that the daily monotonous boredom means I am peppering my friends and family with a lot more texts and messages and pictures than normal. I’ve always been an oversharer at the best of times, and most of my friends and family tolerate my constant barrage of messages because they know I haven’t got anyone else to talk to all day. But they are all busy people who work and have lives so it’s often quite a one-way conversation. I often send a message out to 10 or 15 people and maybe one person will reply – and they probably don’t know that they might be the only person I’ve talked to that day. However it is also encouraging me to reach out and reconnect with people I haven’t spoken to in ages. I’ve been trawling through my phone and email contacts reaching out and saying hello to lots of old friends I don’t normally see or speak to, and making plans to visit or catch up with them which is really nice.

As I say, don’t go getting out the tiny violins on my behalf, I’m not lamenting my poor sad lonely existence, just trying to write an honest commentary of my life at the moment, warts and all, which includes the boredom and the loneliness. And I’m quite sure that women on maternity leave and stay at home parents all over the country will agree that it’s really quite boring and repetitive at least until the kid can talk back…

It is also making me into the kind of mum I never wanted to be. Before I had a kid, I used to see mums at the playground or out and about, constantly staring at their phones and ignoring their kids, and you think “Well I’m not going to be THAT mum”. But honestly it’s so boring sometimes and children’s games are so repetitive (not to mention the fact that kids need to learn to be left alone to play and be bored sometimes and not constantly interacted with) so of course I spend a shocking amount of time on my phone all day. Staring at facebook, instagram, reading the news, texting and messaging people, and doing admin like calling to book appointments etc.

So it’s terribly sad that my toddler’s favourite toy is her little plastic mobile phone, and she stares at it hopefully, poking and prodding the plastic screen trying to work out why grown-ups are so interested in it. It makes me cringe, but the boredom is winning so I just have to swallow the guilt – I suspect that obsession with phones is inevitable in this day and age anyway, so maybe it’s not as bad as I think it is, but I still feel guilty about it!

Also in fairness while I feel guilty for spending a lot of time on my phone, in reality it’s probably a bit more like this throughout the course of the day: 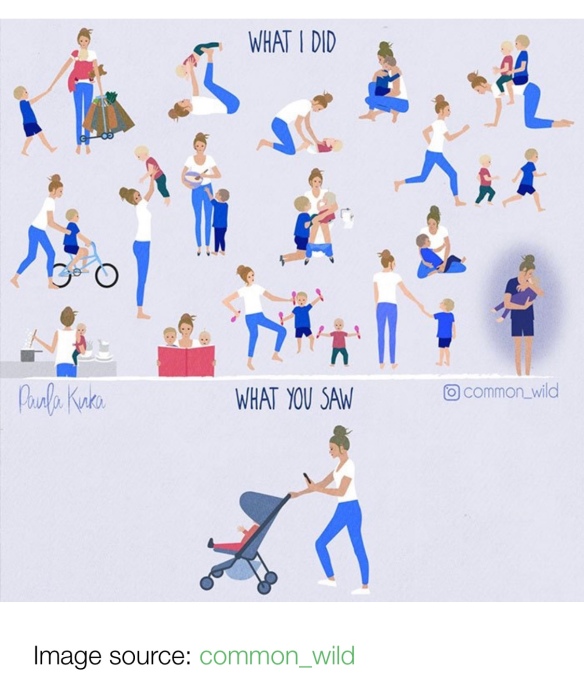 1 thought on “The Adoption Conversation”