Well here are a few more snippets into the minutiae of our daily lives at the moment – a few little things that make me laugh or just reflect life with a toddler!

As she has a birthday quite near to Christmas, there has recently been a flurry of packages arriving in the post of things that I don’t necessarily want her to see… So I have been handing her the giant bubble packets of air to pop while I squirrel away whatever was in the box, and then show her the empty box. This seems to be working, but she now thinks we are just ordering tons of empty boxes full of bubble wrap for her to pop!

I have recently learnt the term “Food jag” which accurately describes what my darling girl is currently doing. She’s a fairly picky eater (not worryingly so, as it’s common at this age anyway) but seems to change her mind about what she will and won’t eat on a daily basis.

Having moved her slowly away from tinned spaghetti and hot dogs to some healthier alternatives, I made a pasta sauce full of secret vegetables, which she liked, so I made a big batch of it to fill the freezer for future dinners, and she promptly refused the eat it the next 5 times I tried to give it to her! I have managed to introduce carrots and peas into her diet with reasonable success, and for about 3 weeks she wanted oranges constantly (I instigated a 2-satsuma limit per day as it’s an awful lot of roughage for a small body!). However immediately after I bought an enormous amount of oranges she just stopped eating them (I’m told this is a classic food jag, to gorge on one thing for a few weeks and then refuse to eat it again for months). She loved fruit over the summer (bananas, apples, oranges, grapes, strawberries) but seems to have suddenly gone off everything healthy all at once. Might be her teeth cutting through though, as her back molars have FINALLY made an appearance!

Our evening food negotiations look an awful lot like this, except it’s usually yoghurt instead of cookies: 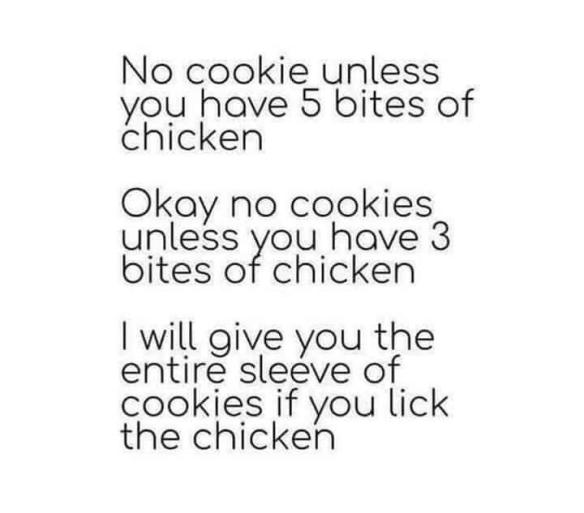 The NHS gives helpful advice on how to expand a toddler’s palate, such as leaving different kinds of food out for them to try, letting them try food off mummy’s plate, and giving them lots of options of healthy things to try etc. They also suggest just serving them whatever you are having for dinner, and not worrying if they don’t eat it – not forcing them but also not pandering to them by cooking different things all the time.

I’m finding it hard to follow all of the advice – on the one hand, there are days when I offer her lots of choices and she doesn’t want any of them – which leads to a lot of food sitting out all day and getting wasted and thrown away. Sometimes she is interested in mummy’s food and wants to eat my toast instead of her toast, even if they are exactly the same, but I always say yes in the hope it will get her more interested in other foods. However I can’t just offer her whatever I’m having and leave her hungry if she won’t eat it, as she gets so cranky when she’s tired and hungry that it’s hard to cope with the ensuing hunger-tiredness-meltdown! I usually give her what I’m having and then when she refuses to eat it and throws it on the floor/cat/my face I make her something different that I know she will eat. Though it’s frankly easier to make her something different that I know she will eat in the first place than serving her what I’m having, getting it thrown in my face and then letting my dinner go cold while I make an alternative meal.

However, overall, I also know that toddlers won’t starve themselves and picky eating can be to do with teething, but it is also a form of exerting control in a time when they have pretty much no control over anything else in their lives so it all seems pretty normal and standard really for a two-year old.

A friend sent me this recently and I really liked it – I’m sure there’s a lot of truth in it! 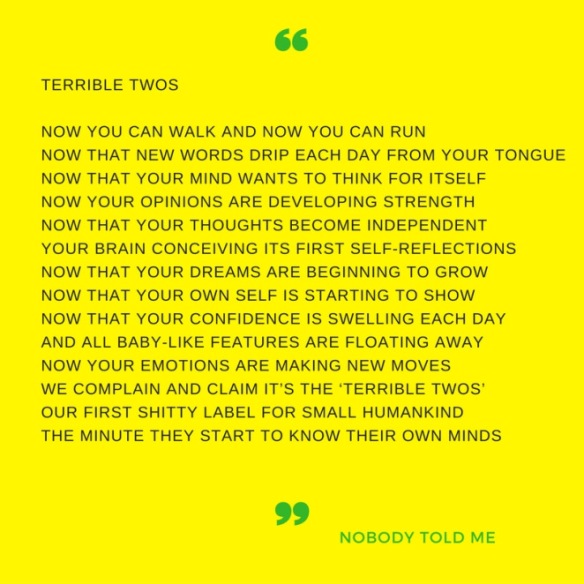 She has also been continuing to try and bond with the cats – Cleo my older cat is the shy one with most people, but once she gets to know you is really quite soppy, and she has adjusted enough to the small person to sometimes sit next to her and have a little stroke. So the toddler loves Cleo, my gentle, middle-aged soppy cat. Tiggy on the other hand was curious in the beginning, showed lots of interest and has clearly now decided that toddlers are scary and threatening. She mostly hisses at the kid, and in spite of me telling her for 4 months not to touch Tiggy when she’s in her cat bed, poor kid forgot the other day and tried to play with her by reaching into the enclosed cat bed, and got scratched. After recovering from the initial shock and inevitable tears, she now re-tells the story in an animated way to everyone (with limited words, admittedly, but its clear what she means when she demonstrates scratching on her arm, then runs over to Tiggy waving her finger shouting “No Scratch! Tiggy No!”).

Hopefully she will remember for next time, though she’s more determined than ever to make friends with Tiggy!

In other news she recently had her 2-year developmental check-up with the health visitors, and everything is going well – she is meeting all her benchmarks/milestones and is able to do most of the things on the list. We had a slight disagreement about her height – I measured her on her birthday and had her at 86cm, but on their official measuring thing she was coming up at 83.5cm – I think she was stooping/bending her head and not standing up properly but they’ve recorded the lower height anyway. It doesn’t matter too much she’s still in healthy range though at the shorter end (25 percentile), although people keep telling me she looks tall for a 2-year old, which is baffling to me but I think maybe it’s because she is quite skinny and not chunky like many toddlers at her age.

And finally a couple of funny but somewhat disgusting anecdotes. If you are squeamish about bodily fluids then look away now….

Firstly – here is the silliest thing I’ve said out loud this month:

“No sweetie, please don’t, NO PLEASE DON’T THROW THINGS AT MAMA WHILE SHE’S HAVING A POO! Mummy doesn’t like it!”

I’ve gotten used to being watched and interacted with while I go to the loo, which mostly doesn’t bother me, though I’ve tried to discourage hugging while I’m on the loo and I definitely did not enjoy having toys chucked at me mid-poo! However this morning I had a whole new bathroom experience to contend with.

Last night I was feeling really nauseous and had a sore tummy, didn’t sleep well, and this morning while making our breakfast I had to suddenly dash to the loo to throw up. To put yourself in the mindframe of a 2-year old, I’m pretty sure she must have thought “Mama usually sits on the loo, but now she’s looking at it really close with her face, must be something really interesting in there! I MUST see what it is!”

It’s one thing to be watched while having a wee, but being watched at close range while you puke is a little awkward, and trying to throw up and simultaneously push the toddler away from you is quite hard. She was DESPERATE to see what was in the loo that I was looking at so closely! It went like this:

“*Vomiting noises…. Baby, no, get back, *bleargh* honey stand behind mummy *hwarrrk GASP sweetie, go sit over there please bubba mummy is sick” – and so on.

At some point, she was standing parallel to my back, and then leaned in to see – I suddenly saw her little head in my peripheral vision peering over my shoulder as I was retching and it was so funny I laughed. I can honestly say I’ve never laughed while throwing up before, but life with a toddler really is full of surprises! Bless her after she understood I was sick she started gently patting my back which was so sweet. And thankfully our main activity for the day was putting up and decorating the Christmas tree which was nice and quiet and didn’t involve a lot of moving around or going anywhere.

So there you are, that’s our life right now!